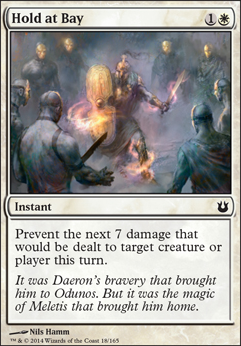 Prevent the next 7 damage that would be dealt to target creature or player this turn. 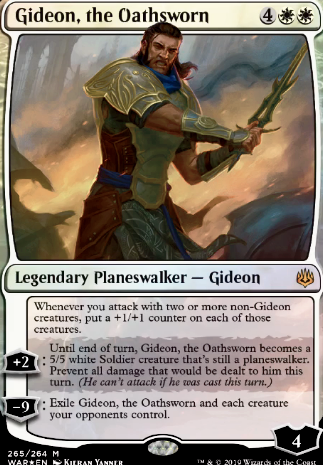 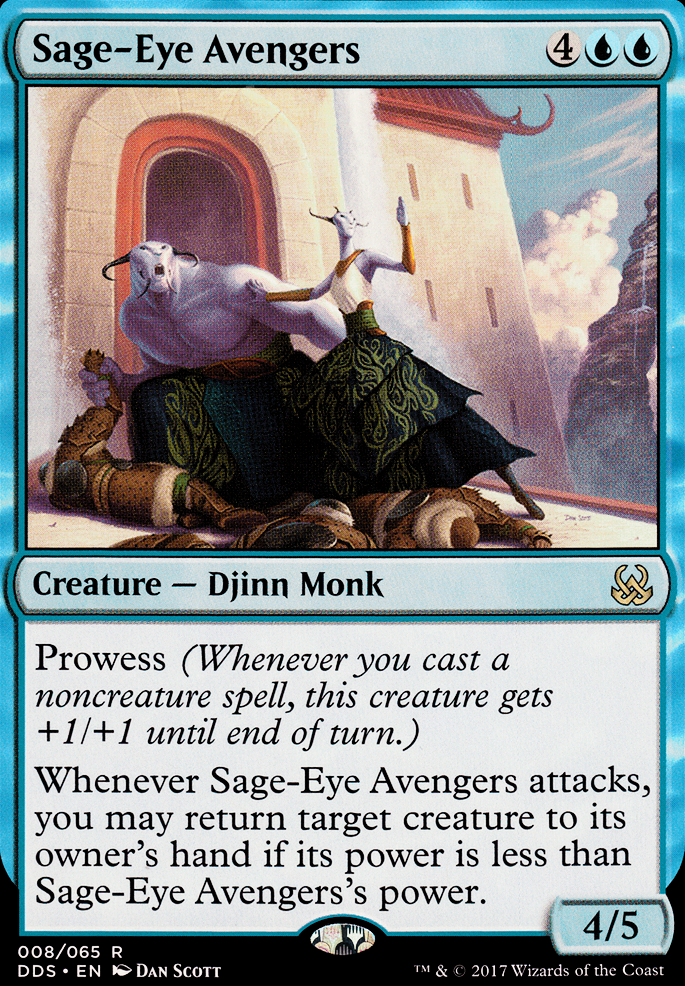 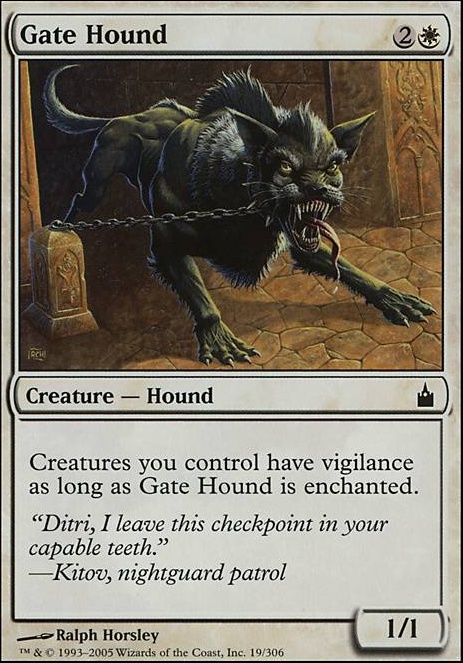 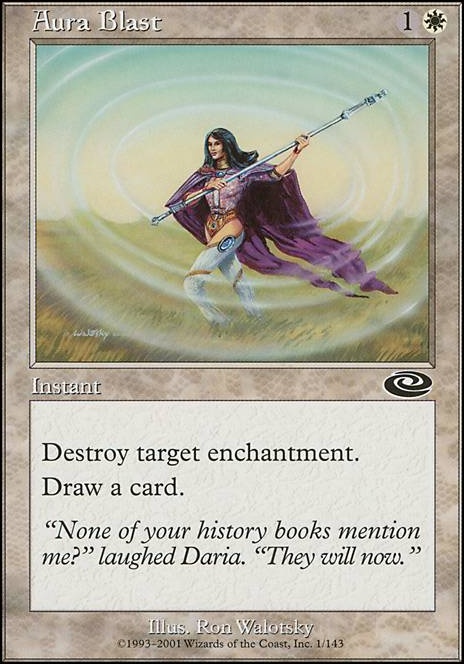 I do have issues with learning priority and the finer elements of phrasing. Usually, I resort to looking it up online. (For example, learning that Hold at Bay can't block damage from Murder because destroy =/= damage.

I think I'm beginning to understand what you're saying. After a few playthroughs against his deck, I did find that we were both topdecking. I think Brave the Elements would be a great card to use because protection is exactly what I need against his deck, but it can be hard because his monsters are split between black and red. Lingering Souls though it's a 3-drop seems really useful because of its flashback. Definitely, something I'm going to consider adding in, though I'm not sure what I'd replace. (I prefer to stay at 60.)

I'm going to add his deck in the description if you'd like to take a look.

Nostalgia in a deck

Voice of Resurgence is a decent one to consider

I'm not a fan of Hold at Bay, Ephara's Radiance, or Pin to the Earth and honestly i'd just cut them.

This is the only comment that suggests changing the overall deck so feel free to ignore this one. When I think green/blue/white, i think of Collected Company decks. I'll throw a link to a decklist below but the card allows you to hit a lot of goodies (Tireless Tracker, Reflector Mage, Spell Queller, Selfless Spirit etc.) If you lowered the cost of your creatures you could move in that direction.

Sorry, I know this was a lot at once but I hope it helps

Since this is modern, you need some cheap/efficient removal spells. I recommend Path to Exile (which i know is around 10 bucks sadly), Condemn, Oblivion Ring, and maybe even Stasis Snare (since you have somewhat of a white devotion subtheme in here with Nykthos, Shrine to Nyx in here. I'd add one more nykthos, shrine to nyx come to think of it. Add a couple Gideon Jura as well. Helps keep you alive against infect and aggro/zoo decks. I like Emeria Shepherd but it's more of a commander card, the mana cost is just too high for modern. Luminarch Ascension might also be good for this deck. Holy Day might be decent as well as it can fog your opponents creatures.

I'd remove the following cards: Archetype of Courage, Emeria Shepherd, Preeminent Captain, Phalanx Leader, Armored Ascension (your opponent can 2 for 1 you so auras aren't generally good in modern, unless you have hexproof creatures to put them on), Akroma's Memorial (good card, but at 7 mana, many decks will kill you before you even get 7 lands out, burn and infect for example), Tatsumasa, the Dragon's Fang (good edh/commander card, but at 6 mana and 3 to equip, you'd need 9 mana to cast and equip it onto something in one turn, and playing something for 6 that does nothing the turn it comes out is bad in modern, if not in general.)

Debtors' Knell is on the borderline of being ok, at least in a deck that will utilize the devotion to white aspect, however, once again at 7 mana it's not even doing anything until your next upkeep)

I'd replace Devouring Light with some combination of better/cheaper removal, perhaps two Condemn and a Path to Exile (or whatever combination of those cards you have or would prefer to play). Hold at Bay seems very mediocre and it takes up a slot that a better card could fill. It's not terrible but it's only preventing damage as a one time use, so you're better off with Holy Day in its place, as it will prevent all the combat damage, not just 7 of it. Solemn Offering is bad since it's three mana to basically cast Disenchant with some lifegain. Resurrection isn't needed either, just get another Emeria, The Sky Ruin to fill the same function. (replacing a land of course and not simply the resurrection slot in your deck)

Ray of Dissolution isn't that great either, I'd take that one out. Also, a handful of cards would be ok sideboard cards. For example, Reprisal, and Elixir of Immortality. Add a couple of Disenchant to the sideboard as well. Two Kor Firewalker will be pulling double duty by stopping burn decks and giving you two devotion to white.

I'd add another Brimaz, King of Oreskos to the mainboard, and add at least two more Acolyte's Reward, (provided that the finished version of this deck has enough devotion to white to really take advantage of it). Grand Abolisher could be good in either the sideboard or the main, so I recommend that card for the deck. The sideboard could just some graveyard hate as well so if you have cards like Relic of Progenitus, Rest in Peace, Tormod's Crypt or Grafdigger's Cage add them to your sideboard. Dredge is a thing now in modern and it is not fun to play against.

Soulfire Grand Master's last ability uses Hybrid Mana (an either/or mechanic), so there's no blue splashing involved. You could just pay . That's not the relevant ability though, it's the second one that gains life whenever instants or sorceries deal damage. A single Lightning Helix could activate your Angelic Accord. You could also replace some of the other less-fitting bits of the deck with more damaging instants like Lightning Bolt, Boros Charm, Arrows of Justice, Stoke the Flames, Warleader's Helix, Lightning Axe, Deflecting Palm, or mainboarding 4x Fiery Tempers. All of them would be doing double duty with Soulfire GM just sitting on the field.

As an aside, I'd also suggest removing the Boros Signets and Luminarch Ascensions to just triple/quadruple up on the other 3 enchantment spells. With the land you have, you don't need the mana fixing the Signets provide (if those are meant to provide MORE mana for the expensive angels and Gearhulk, Signet does nothing to help that way. A higher land count would be better). The Ascensions work off having a Fog effect, like Angelsong, Ethereal Haze, or Hold at Bay. Gaining life BACK after life has already been lost during a single turn would still prevent Luminarch Ascension from getting a quest counter.

Deflecting Palm and Wear / Tear into Sideboard. Ethereal Haze or Holy Day over Harmless Assault and Hold at Bay. Smite is ok, but exchange it with Path to Exile if possible. And where is your Lightning Helix?