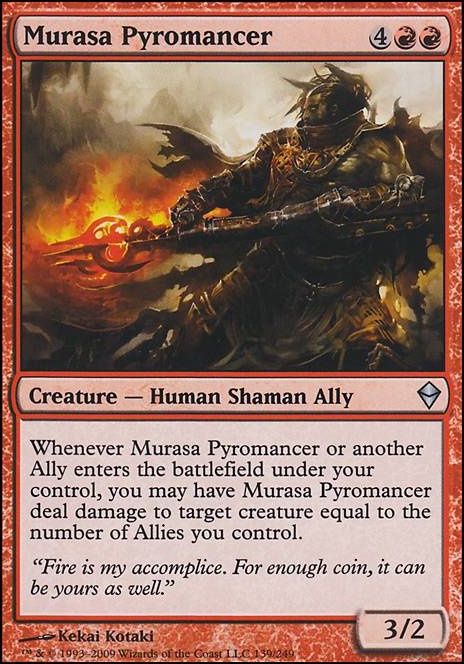 I recommend Hero of Goma Fada and Murasa Pyromancer. They are both good late-game allies for Grundy commander games. Adaptive Automaton and Ephemerate are also good.

Alright, so my suggestions...

1) drop any tapland that doesn't give you 3 options, otherwise you're going to be too slow right out of the gate. You're already very creature heavy at 36, so I don't believe the manlands are necessary.

There are about 2-3 allies I feel just don't carry their weight (+1/0 for turn ally, the mill ally in particular), I would drop one for an Aether Vial to help flood the field even faster (the second I would drop for a Sol Ring , quite a hard card to justify not running if you don't slot Stony Silence or Null Rod ). Also, I'd find a way to cut some of the higher CMC allies... 5-6 is quite expensive for some of the benefits, and if you board state is already at a point where Murasa Pyromancer is relevant, you're probably in ""win more" territory.

As mentioned previous, Chromatic Lantern is a fairly auto-include in a 5 color deck .... Xenograft & Arcane Adaptation seem as if they're taking slots for very little benefit, Cathars' Crusade IMO would serve a much better benefit.

I don't really see a way for you to self-activate Child of Alara outside of Divine Reckoning , I would drop it and find another wipe if you'd like to go that route. Also, I'd include Teferi's Protection & Faith's Reward... you are going to be fairly susceptible to wipes yourself, you'll need more options than a massive amount of mana to dump and Asceticism .

These are all personal opinions of course.... I just feel with your dedication not to run flash hulk, you still need to speed up.

My friend has an ally deck so I might be able to give a few suggestions.

Any reason you are avoiding the old allies?Kazuul Warlord can really help beef up the allies, as normally they are pretty weak.
A few allies that have target removal are Murasa Pyromancer and Tuktuk Scrapper.
And if you want a bit of life gain Talus Paladin and Ondu Cleric can be quite good.

use fetches (Arid Mesa, Wooded Foothills, Windswept Heath), Cavern of Souls, Harabaz Druid for the ramp, maybe two or three Expedition Envoys for another 1 drop. Try a single copy of Murasa Pyromancer for removal, then fragmentize to the sideboard, full play set. Either Pacifism as a play set in the sideboard, of 1 step better (arguably), Path to Exile. add some bolts as well. If they don't have any creatures, just burn them.

In all honesty I am just lucky with this deck. only times I Mulli is if I need a land in my starting hand which is rare to be needed. But the Druid and Freed from the Real is what usually is pulled off by turn 3-5 once you get the endless amount of mana I cast my commander search for Murasa Pyromancer and target my commander then recast and repeat. That goes off at least 75% of the time on turn 5 it's little less and so on. But that's what the other combos are for. I do have things that allow me to play cards for free one from top of my library another which is wild pair. Then there's the one drop "you play land I play a land" enchenment which helps speed the deck up a crazy ton. If no one has a kill spell I don't need to attack or -50 to deal 50 they just loos life every time a ally comes out. All loops on this deck other then xenografts ether allows me to draw and play my deck in a single turn or play all my ally's in a single turn(could also draw with that one but most likely just draw my self out). To answer how do I keep it from interrupted Is I can make them pro- colors(except red if I am doing the one I I explained first) or I could simply make them all indestructible.

Hi there, I've played several games in my group with my Ally EDH deck, all I can say is that you will have big trouble against flyers. You really need something against flying creatures on your opponents turn. As far as I can see it is possible for you to play Tajuru Archer or Murasa Pyromancer to deal with them effectively. I would highly recommend something like: Levitation or Archetype of Imagination.

On the other hand, I always liked Brago, he is so powerfull and easily available on turn 3 to blink a turn 4 Tazri. But depending on your opponents you might need some other instant blinkers. Ghostway and Kiki-Jiki, Mirror Breaker are mostly an auto include if affordable. A more budget-ish card is: Nephalia Smuggler, otherwise you could use something like Flickerwisp or Restoration Angel.

Gideon, Ally of Zendikar and Venser, the Sojourner are also very good in those decks.

I would also recommend some spot removal like: Anguished Unmaking or Utter End.

Birthing Pod and Blade of Selves are also very fun to play, imagine all the counters you will get of a myriad Kazuul Warlord. Maybe Doubling Season would also be useful in here.

Just some of my thoughts. I hope some of the points may help you. ~Cheers +1