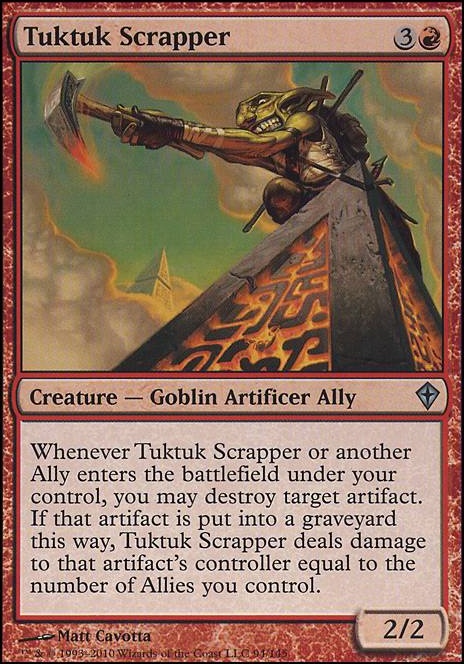 Tuktuk Scrapper occurrence in decks from the last year 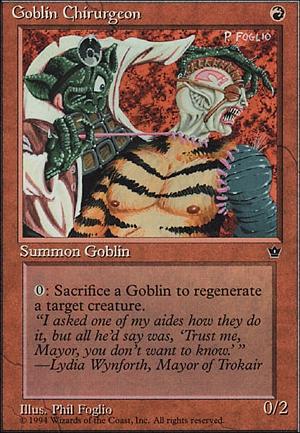 For 1 more mana Qasali Slingers could replace Tuktuk Scrapper if you need to deal with enchantments too.

I would probably play trashmaster over Tuktuk Scrapper . And while I'm at it, Sling-Gang Lieutenant seems like a perfect fit.

You might be able to squeeze in one Kazandu Blademaster , depending on the day (it runs between 40 and 60 cents on TCGplayer, and your average card price has to be around 13 to make it under $5). Tuktuk Scrapper is a definite for the sideboard.

snowfox54119, does no one in your meta play Grafdigger's Cage or Wheel of Sun and Moon ? The more creature heavy Grenzo runs the more vulnerable he is to either of those cards. Since you aren't running any Instant Speed removal if one of those cards resolves you can't cheat in any creatures with Grenzo. At that point you'd be hoping to draw Goblin Cratermaker , Meteor Golem or Tuktuk Scrapper so you can hard-cast as removal.

You might want to keep your descriptions more positive...saying things like "this deck usually does not have legs in competitive pods," or that this is "the worst colour combination in commander," or "You want to eliminate someone every game regardless of a win," will cause your viewers to lose faith in the deck!

Have you thought about running any allies to have synergy with your commanders? I really like things such as Kabira Evangel and Tuktuk Scrapper that give repeatable value, and Gideon, Ally of Zendikar is an excellent ally token maker! He's pretty decent even if you run no other allies!

I really think you ought to run more draw sources! Skullclamp has really good synergy with Nahiri, the Lithomancer, and if you can't afford a Wheel of Fortune, then Reforge the Soul and Magus of the Wheel are good budget options too!

Since you really can't afford to lose to a Vandalblast, I highly recommend Leave / Chance! In addition to being a Boros Charm effect, it's also a Brand effect and emergency draw source!

I noticed that you like infinite combat combos, yet you don't run Godo, Bandit Warlord + Helm of the Host! Both of these cards fit your strategy and are pretty good by themselves!

i know you rely on the self sacing the kikijiki tokens do themselves for some effects, but you might want to consider Sundial of the Infinite at your end step, when they would be sac'd in response you end the turn, the stack fizzles out, and you keep your tokens for another round.

and instead of Tuktuk Scrapper, you can now replace it with Goblin Cratermaker from teh new Guilds set, and is 1 mana cheaper. which at worst you kill some artifact or 2 toughness creature, but now you can kill eldrazi's and even karn or ugin planeswalkers.

Thanks Optimator I'd lost track of a few of those Gobbos. Perhaps I'll replace Tuktuk Scrapper for Goblin Trashmaster

Skullclamp to make your commander a draw engine. Best suggestion I have ever given you or will.

I don't get what purpose the 2 colossus serve. In my opinion, you would be better off with some burn spell like commet storm or rolling earthquake or Jaya's Immolating Inferno. A lot more versatile, can come down sooner and cheaper. Add some more utility creatures to help you with some common situations

Solemn Simulacrum - For ramp, card draw and a body, all needed.

What purpose does rings serve? Maybe im missing it? It can help you draw extra cards with senseis or add a basalt + rings + senseis + 2 mana to get infinite colorless mana and draw your deck.

Mind Stone - Maybe?? Idk, not sure if you need it. Ramp when you need it, card draw when you don't

Hanweir Battlements - Not sure if you need it but worth considering. Other half is irrelevant

Strip Mine - Because cradle, coffers, urborg, eye of ugin all need to die

Disrupt Decorum - Maybe to get their blockers open and more politics!

Inventors' Fair - Tutor for the artifact you need