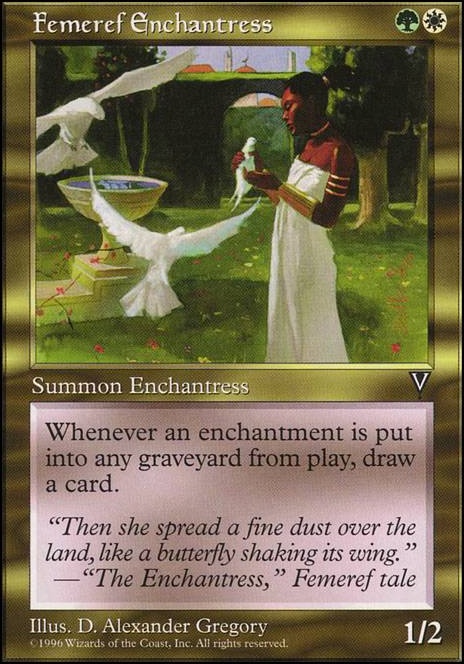 Whenever an enchantment is put into a graveyard from play, draw a card.

Femeref Enchantress occurrence in decks from the last year Don't love Kismet I think that's more annoying than wood. Does Words of Wind have some sort of combo with it? Femeref Enchantress has always seemed kinda bad to me, though I haven't played it. Losing enchantments is actually kinda hard. I absolutely love Aura Thief; it's one of my pet cards, but I think it does get significantly weaker without a lot of sac outlets.

I run Eldrazi Conscription in my Tuvasa deck as a quick finisher. I think Verduran Enchantress is also a must play. The enchantresses are all just so ridiculously good in the deck. Winds of Rath is a nice sweeper that your stuff can dodge a lot of the time. I've liked Finest Hour in my Tuvasa deck. It can let your Tuvasa kill someone without a blocker really easily a lot of the time. Faeburrow Elder has been a mustplay for me in three+ color gw decks. Eladamri's Call has also been awesome in my Tuvasa.

LordKunai I'd say this deck is pretty competitive, I've battled several T1 and it's doing some good work. Against Meren decks I think this stands really strong. Always look at cards with these "tips" in mind when determining the competitiveness of a single card. 1) Does it have immediate value? 2) Is it 2 for 1? 3) Cast trigger/instant/single color CMC etc 1BR is easier than BBR to cast

Back to Femeref Enchantress - since it brings no immediate value to the table and has a delayed trigger (on death) it's just bad :)

bare in mind that this deck isn't up to date and is lacking in power atm.

Hey! love the build. I had 2 thoughts/questions... 1, what does you/everyone think about Femeref Enchantress for this or your Tuvasa deck. and 2, How well do you think this deck would hold up against a fairly competitive, stereotypical Meren of Clan Nel Toth deck (recursion, force you to sac, controllish)?

Hi i think you missed Plaguecrafter but i think he will be really good in your deck and is strict better than flashbang marodeur etc. Also take a look at Beast Whisperer is also really good in Karador. But there are in combination with aura shards also Femeref Enchantress and Viridian Revel who will give a nice draw.

Also here my note to another karador deck whick seams to be private atm. :

good but not direct impact: