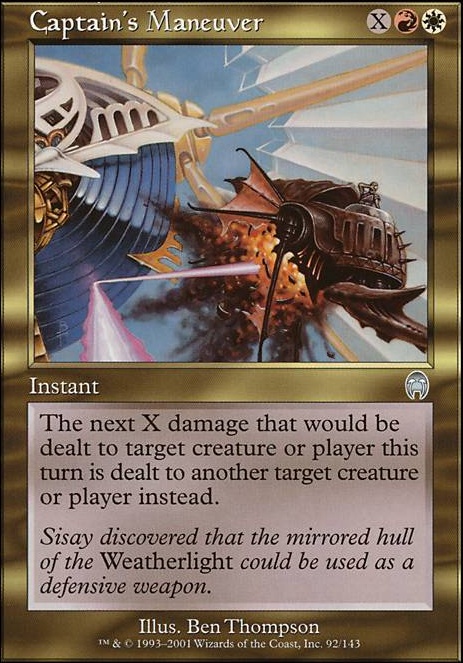 Tylord2894 on Can redirected combat damage from ...

Yes, that would work, but wording is very important here. The key is that Captain's Maneuver is a replacement effect that changes what is getting damaged. There are other "redirection" effects that seem like they do the same thing but don't, such as Acolyte's Reward. The Reward prevents damage then it deals damage. While the effects from Reward and Maneuver seem identical, they are importantly different.

Since the replacement effect from Maneuver changes that is being dealt damage, you commander would be dealing combat damage to that player. All combat damage dealt to players is commander damage.

Legendxp on Can redirected combat damage from ...

For example, let's say I have Tajic, Blade of the Legion and 2 other creatures attacking. I've already dealt 14 commander damage from him and my opponent blocks.

I then cast Captain's Maneuver with X as 7 so that my commander deals his damage to the defending player instead of his creature.

A cool thing about Mirrorwing Dragon is when an opponent casts a removal spell on it, it copies that for all of their creatures. Anax and Cymede and Twinflame are HUGE overperformers, but only if you run a few more creatures. Captain's Maneuver is underrated, and the Lapse of Certainty + Mistveil Plains + Sunforger combo is nothing to sneeze at. All in all, great list. Weâve had some good luck with boros in Commander lately with Firesong and Sunspeaker , and I hope that we get more interesting commanders for the best worst guild in the sets to come.

I once thought about a similar deck, but it was more goofy. It tried to incentivize the opponents to attack each other and then cast pump spells and cards like Berserk or Blood Frenzy on the attacking creatures - ideally on their commander. Your deck somehow reminded me of that idea. I think, I'll have to start working on that again.

The following cards were in the deck I mentioned before and could be nice in yours as well:

That's all for now. Let me know what you think

Also removed Mathas, Fiend Seeker, Flickerwisp and Captain's Maneuver. Replaced them with a few creatures from Ixalan with enrage.