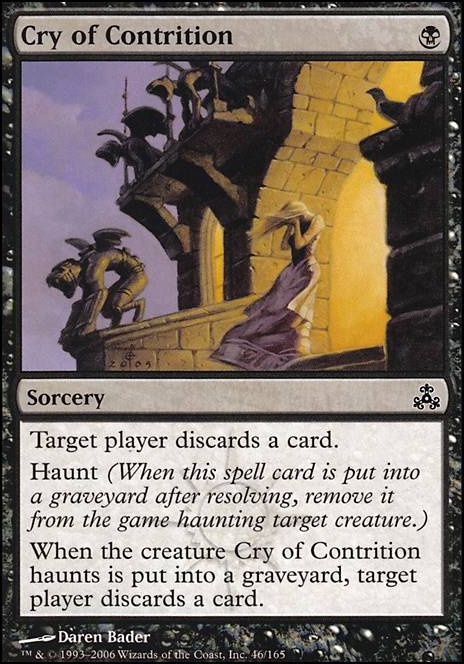 Haunt (When this spell card is put into a graveyard after resolving, remove it from the game haunting target creature.)

When the creature Cry of Contrition haunts is put into a graveyard, target player discards a card.

Daddy i would like to play some cards...
by Tomrzdo 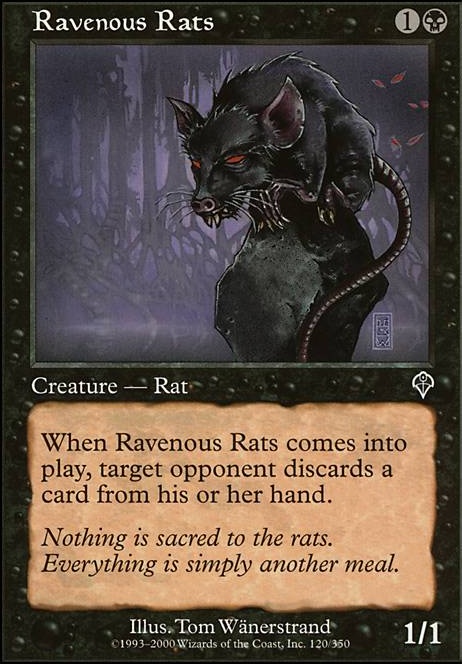 Swallowed by the Eldrazi

Haakon, Stromgald Scourge + Cry of Contrition and haunt a chump blocker to force extra discard, this time on the opponent. and enjoy that graveyard casting afterwards too.

Considering the Haunt mechanic requires you to exile your creature or spell upon entering the graveyard, you may want to remove all of those. That accounts for at least 19 creatures from your list which would bring you down to 116 cards. You can also replace the Orzhov Guildgate for a Bojuka Bog to hit an opponent's entire graveyard. Since you also wanted to steer away from the Extort mechanic, you can remove those as well, along with noncreature spells with Haunt like Benediction of Moons , Cry of Contrition , and Seize the Soul . Theses suggestions might help to trim the deck down.

Yo breh, I looked through what you have and here are some suggestions

Cards to switch out

Leyline of Sanctity for Polluted Bonds

It's pretty rare that you'll be hit with a target player effect at our table, so this won't see much use. Good for a sideboard though in case you're up against a burn or mill deck.

Riot Control for Epicure of Blood

Dawn Charm is enough for a deck with as much protection from attacking as this deck, so you can drop Riot Control. Epicure of Blood is the second half of your instantly kill everyone in the game combo.

Cry of Contrition for Karlov of the Ghost Council

Cry of Contrition doesn't do much since it doesn't target a specific card. Karlov is just one mana cheaper, and with as much life gain as you will be getting, it's basically an endless source of exile effects and can double as a super strong attacker or blocker because it'll be gaining 6+ counters per round at a 3 person table.

Mindcrank for Orzhov Signet or Orzhov Cluestone or Thought Vessel

Mill won't be a win condition for this deck, and by the time you deal enough damage to effectively mill someone, you probably will have already killed them. Also you could use some more mana rocks in this deck in general.

Angelic Accord for Luminarch Ascension

More reliable than Angelic Accord and can generate as many angels as you can pay for.

Obzedat does what 90% of your deck does, only he comes with the drawback of not being able to block if you actually use his ability. Teysa shuts down creature swamp completely and gives you tokens to block with.

Land of your choice for Reliquary Tower

Lands of your choice for Terramorphic Expanse, Evolving Wilds, and Myriad Landscape

These don't seem great at first but it lets you get the lands that you want, while simultaneously reducing your land base and deck size after playing them which raises the probability of drawing the cards you want.

Approach of the Second Sun (because it's an aesthetic win con)

Overwhelming Splendor if you want to be a real cunt

The reason this isn't listed as a necessity is because I'm pretty sure you already are adding it. Seriously tho add it

This straight up just prevents people from playing anything with toughness 2 or less and puts a gap of 4 between the power/toughness of your creatures and theirs, making all of your creatures viable attackers and blockers. Seriously this wins games

Sheoldred, the Whispering One

How to Piss Players Off On A Budget

Looking to even out your manabase without breaking the bank? Grixis Panorama is almost playable, and there are various taplands with upsides.

Thoughtseize, Inquisition of Kozilek, Probe, Consult the Necrosages, Hymn to Tourach, Raven's Crime. Augur of Skulls with Cry of Contrition or Dying Wail

If you look up a Legacy 8-Rack build (I have one on my profile) you can get a good start. Liliana's Megrim operates very similarly to 8-Rack.

Here are some ideas for the defensive options you mentioned:

Utter End and Anguished Unmaking are some good targeted removal options. Ashen Rider and Angel of Despair do the same thing on creatures.

Blind Obedience gives you another offensive and defensive option. Ghostly Prison, Sphere of Safety, and Koskun Falls work well together to tax your opponents to prevent large strikes.

For this type of deck, Exsanguinate can be another good aggressive card / finisher.

There are a couple cards that I would consider removing:

Contaminated Bond and Shadow Lance are very limited options, since they only effect one creature.

Castigate and Cry of Contrition only target a single player as well.

Carom and Shred Memory don't seem to do much. Tendrils of Corruption is an expensive, single target removal against one creature.