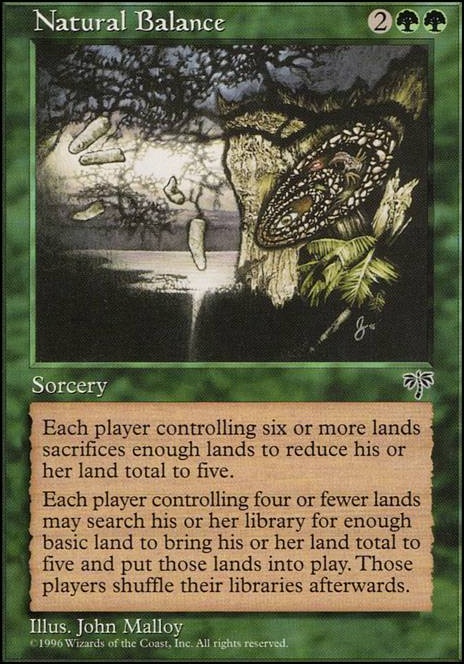 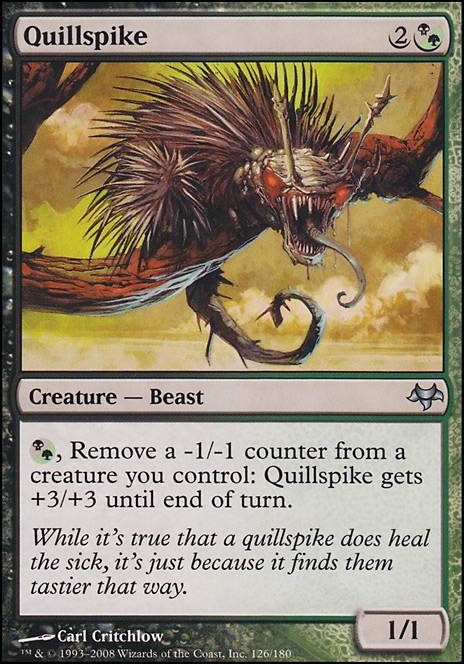 Claws of Gix is a card I should really have in here, and it's cheap to buy also, always a plus. I'm on a semi-budget, basically I buy myself an expensive new addition a few times a year (I don't know if I'll ever get my hands on a Gaea's Cradle heh). My next planned purchase is a Command Beacon which honestly seems pretty broken with Titania ^^

Lotus Vale and Akroma's Memorial are definitely on my radar, but I feel like the beacon is more important at this point, the memorial is definitely awesome though. I also used to run Natural Balance , but I too often found it sitting in my hand for too many turns in a row, so I ended up cutting it.

Ah yeah, that's a good reminder! Petrified Field was out of stock last I time I ordered and since then I just kinda forgot about it. I'm definitely going to pick one up together with the Command Beacon .

Looking at your decklist, I don't think I would really consider this deck a control deck. I think you should consider adding Death Cloud and Natural Balance. Since you are built around sacrificing your own lands, the drawbacks of Death Cloud are significantly reduced. Natural Balance is really nice when coupled with Squandered Resources (perhaps my favorite card with the frog), as you can sacrifice all your lands (getting mana and drawing cards), then cast Balance for more lands while making your opponents sacrifice lands if they have too many (which is good against other greedy green players).

Honestly, the worst league I've been a part of lasted a month and always had a true dual as a prize as well as about $200 in store credit across the top 3. The collusion for the top spots was insane.

I think rather than force people off of certain archetypes or punish 'bad' playstyles, just be reasonable human beings. Talk about it. Is there someone at the shop who's running a 3K Grand Arbiter deck and making everyone mad? Maybe ask him to run some suboptimal cards or ask them to cut down on the number of stax or tutor cards. Don't force them off their deck. Or maybe suggest they play something very close but clearly lower in power level. Playing Arcanis the Omnipotent where all of your combo pieces have an enchantment in them slows the combo player way down and makes it so that the combo pieces are much harder to dig up. Someone loves blowing up lands because of the 15 ramp deck in your league? Maybe point out that there exists cards like Natural Balance that help address ramp without resorting to Armageddon.

My point is attempting to reach a state where people self-police is far better for the group than establishing hard restrictions. In addition, when someone goes too far, it sets the stage for others to gang up on the player.

You are right in adding in a lot more ramp cards to trigger more land fall effects, cards I can think right off the top of my head that can accelerate you are Exploration, Burgeoning, Oracle of Mul Daya, Wayward Swordtooth, Mina and Denn, Wildborn, The Gitrog Monster, and Azusa, Lost but Seeking.

Mana dorks are efficient as well, and I would highly recommend Orcish Lumberjack as it pairs super well with your commander! Aside from that I would also incluse the efficient land ramp cards like Nature's Lore, Farseek, Rampant Growth, and Kodama's Reach. For some more triggers that can be amazing for a finisher would be Titania, Protector of Argoth. There are some cards that would synergize well with her and your deck such as Lotus Cobra!, Sylvan Safekeeper, Crop Rotation, Scapeshift, and Natural Balance.

One last card I would definitely recommend for your land package would be Realms Uncharted super amazing card for a land deck! Hope that helps and feel free to ask for more help if ya like!

hkhssweiss - I actually pulled a Standard Bearer in a booster pack from an old box a store had, just last month. Usable if I have a good recursion package out, and keeps to the "jank" theme for sure!

I really like the idea of things like Dense Foliage in this, especially played at the right time. If I wanted to follow that theme of control, I'd need to make sure I threw in some Ghostly Prison and other pillow forts to protect me from people's scary creature. I think that's the biggest worry with this deck, some sort of battlefield presence to stay alive.

I got a neat side idea for pulling ahead! I think the mass land searches that heavily favour me when Ob Nixilis, Unshackled is out could go great with the one card you recommended, Natural Balance... It'd be a strategy for a little later in the game if I have in my hand a couple cards like Weird Harvest or Collective Voyage that give everyone the option (to search themselves to death), I could play Natural Balance to cut everyone's land mass in half, then jump ahead in a huge way. The Ramunap Excavator or Crucible of Worlds also put me ahead. Ohhhh. Now I just need some extra ways to make use of that extra value I could have.

So - on your idea, hkhssweiss, what are some good instant or sorcery recursions to keep bringing them back? Eternal Witness is off the top of the head, but there must be some more good ones. Revive. hhmm

Lord Windgrace. Long may he reign

Take out terramorphic and evolving unless you add more basics, Spinerock Knoll, probably Rocky Tar Pit, and Mountain Valley, Chromatic Lantern, maybe no Countryside Crusher or Cosmic Larva, Behold the Beyond, Beseech the Queen, Diabolic Tutor, Ever After (Unless you add more better creatures), Natural Balance, you dont really have a use for Doubling Season,