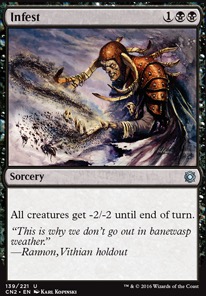 I guess I am just a little unclear on how often and with what timing some state-based actions are checked.

Let's say my opponent has a Crusader of Odric, a Ballynock Cohort, a Doomed Traveler and a couple of soldier tokens. Rightly enough, I play Infest. The question is, what's left after the dust settles?

-Crusader of Odric survives as long as at least two other creatures do.

-Ballynock Cohort will survive so long as one other creature does.

-Doomed Traveler won't survive, but will spawn a creature to replace itself upon dying.

This would all be pretty clear-cut if not for the Traveler, basically. Will the token come back in time to save the Cohort, and thus the Crusader? Or will they die from having 0 toughness before the token can save them?

I've played games where I've had Shalai, Gaddock Teeg, and Mother of Runes all out on the board at the same time. It gives my opponents headaches to try to crack through that. Since cards like Infest don't get played that often in EDH, usually what you have to watch out for the most is an overloaded Cyclonic Rift or a Toxic Deluge.

Yavimaya Hollow is pretty expensive, but it is a good inclusion if you can get your hands on it because it is legendary so Sisay can tutor for it. I've often used Sisay to get Shalai and the Hollow at the same time so that I have a way to protect Shalai the turn she comes down.

First I want to stress that there is no universally "correct" stax deck - the best deck for my meta is likely TOTALLY different than the best deck for yours. My list may serve as a good starting point, but everyone will need to tune things individually for their own games!

At this point there is little to no creature aggro in my meta (which now consists of T1/T2 CEDH decks). I suspect this is true for many other CEDH metas, as creature aggro is generally not viable at the strongest of tables (it is possible to kill players with this strategy, but often difficult to actually win the game entirely). As a result, my answer to the question of, "How do you deal with low-to-the-ground token/aggro decks?" is simply, "I don't have to." Of course, some sweepers are still extremely useful for destroying generals, utility creatures, mana dorks, etc, so you'll see a few in my list (Toxic Deluge, Yahenni's Expertise)... BUT, I don't have to always be prepared to stop a token horde on T4... it's simply not an issue I need to deal with.

Of course, my experience is unique and totally different than many metas! If your opponents have more combat-focused decks, swap in tools to deal with them. Again, my deck is a good general starting point, but will need lots of tuning for any particular meta. You could consider repeatable sweepers like Pestilence/Crypt Rats, one-timers like Shrivel/Drown in Sorrow/Infest, more exotic workarounds like Living Death (these cards vary in competitive viability, but you get the picture)... what about Archfiend of Depravity? It's not a comp-viable card but if you are constantly facing down token swarm, it seems pretty darn good.

Note that if your opponents are more devoted to creature combat, that means they're LESS devoted to the things MY particular build is designed to stop - you may find that the slots for Trinisphere and Damping Sphere are better filled with creature removal; if that's true, then it's a change you should make!

Karoo lands come to mind but I feel they are lackluster, actually slow us more than they help, etc. What about multiple land drops? Azusa, Wayward Swordtooh, Mina and Denn, Oracle of Mul Daya... These are all on the maybeboard and might help. Another alternative is cutting Null Rod and running artifact ramp: Grim Monolith, Signets, the one Talisman we can run...

My meta is somewhat competitive :P So no ridiculous amount of creature pressure. If there's creature pressura it's generally to combo in a single attack (Selvala, Yisan, etc.). Only one Markov vampire deck stands as a true creature aggro deck. However, I think playing cheap boardwipes might be more effective. Examples: Pyroclasm, Fiery Cannonade, Whipflare, Infest, Anger of the Gods, Sweltering Suns... You can drop them all 1/2 turns before you play or commander, or even the same, if you -3 then wipe the board with 2 mana, you are set.

What indestructible creatures work towards our plan besides the simple fact of being indestructible? After a little googling I came upon:

Hazoret the Fervent - Pitches lands and works around the fact that we have little card advantage (?) ;

Myojin of Infinite Rage - Cost a million mana but wipes lands by itself if nothing else (?) ; Predator Ooze - it's... big? xD ;

Sapling of Colfenor - Actually might work. It draws us cards if they are creatures, doesn't lose us life like Dark Confidant... We are a little short on creatures but I think this is the best one so far, as far as non-conditional indestructible creatures go;

Song of Freyalise - Most telegraphed "I'll wipe the board 2 turns from now" ever. However, it ramps us a lot and makes everyone of our creatures indestructible. It may be nice;

Stonehoof Chieftain - really big, makes everything indestructible in post combat. However, it costs a huge amount of mana;

Temur Sabertooth - Well, saving our utility creatures, recycling ETBs and leaving a 4/3 behind, might be worth some consideration at least;

Yahenni, Undying Partisan - This one gets REALLY big after a board wipe, just sac a dork for it and take over the game. I actually like it quite a lot.

JANKYARD_DOG on What game elements does a â¦

Black is probably your best bet as most hate bears are just that... 2/2 bears. Bontu's Last Reckoning, Toxic Deluge, Drown in Sorrow, Biting Rain (madness cost), Flaying Tendrils, Infest, and Golden Demise are all under 4cmc. May not hit them all but it'd surely get a lot of them

Locust God is a solid commander, quite powerful, but makes for terribly predictable deck. A guy in my group already made it and he got bored of the deck after two or three games.
I have many other commanders decks anyway, more than I can play, Hapatra's game feels really fresh gaining board pressence since the early game and capitalizing in the snakes' Deathtouch big time in the late game.
The disposable deathtouchers are great for not needing to block because nobody want's to send their shiny mythic creatures to die killing a renovable token, so they create a virtual pillow fort. The same works attacking they rather take one damage than wasting their amazing creatures, not to speak of the abuse of combining Deathtouch with Trample or First Strike.

The good thing about Hapatra is she usually won't be percieved as deserving of a targeted spell, there are bigger threats on the Battlefield, she is not going to kill anyone by herself and she is only a threat to small creatures. Who would really spend a Path to Exile on her? Her snakes will remain on the battlefield anyway.
The bad part is she is quite weak against board damage or Infest type effects, that's why I have many cards to protect her and return her to hand from the battlefield.
You know which creature was always getting targeted by every player in every game? Necroskitter! My play group was so utterly terrorized of it that I never got to use it's second ability, so at the end I had to take it out of the deck.

Yep, i have two opponents: one have a red dragon/burn with the biggest threats be the likes of Ball Lightning, Thundermaw Hellkite and Vexing Devil on turn one every single time lol. The other one has a green elves but i already beaten him easily with some mass removal like Infest.

I've got one Tragic Slip, but i think it's a lot situational, since if it is the only spot removal in my hand i'll be in trouble with a mere -1/-1. I've 4xVictim of Night sideboarded and well, i think i must try first and see if the Fatal Pushes can be good or replace them.

I've got even 2xSurgical Extraction sideboarded and i find it really useful... but i'm afraid to find it when i would need better a discard. Even this i must try first!

I think the question with Spore Frog is: what is the problem we encounter that this seeks to solve, and is it worth spending our Meren triggers bringing this tool back over the alternatives? By spending resources recurring Spore Frog, it means we aren't utilizing a Reclamation Sage, Fleshbag Marauder, etc. so we should be sure it's the right choice.

Spore Frog seems to shine best as an anti-aggro strategy against a single aggro deck (since he can't protect you from multiple). The price paid is your Meren trigger each turn. If your meta is such that this gives you the space to win the game, I think there is nothing wrong with the choice - but keep in mind that Spore Frog doesn't deal with problems permanently and requires a continuous stream of resources (Meren triggers) to maintain. So, it is worth examining whether Spore Frog handles the problem better or worse than simply adding more removal (either that which is already in the list above, or alternatives like Infest, Drown in Sorrow, Fatal Push, Snuff Out, Go for the Throat, etc)

Yes! Living Plane has benefits outside of the combo. Off the top of my head: