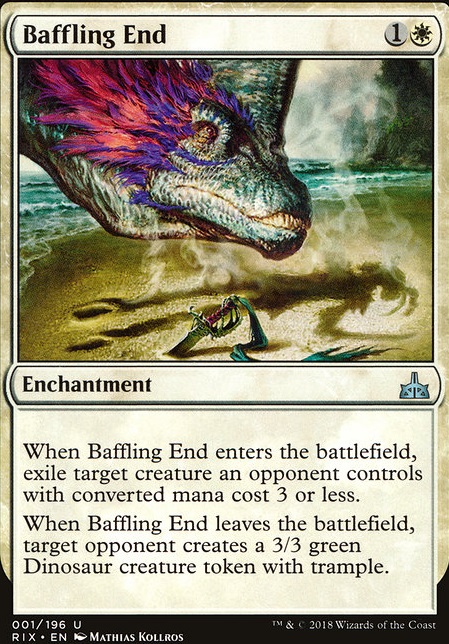 Not sure running Moon-Blessed Cleric just to tutor High Alert is worth it. If it had high toughness maybe, but 3/2 stats kind of suck in this deck. Letting you tutor up a Detention Sphere, Rest in Peace, or Baffling End when needed is okay though.

Slaughter the Strong is another one-sided boardwipe that can costs one less than Dusk / Dawn.

I second cutting The Wanderer, it doesn't do enough here. For removal, I'd add some Portable Hole and Baffling End to handle the lower cmc stuff while Detention Sphere hits the bigger targets.

I'd maybe cut a 1-2 copies of Azorius Charm, since the removal option doesn't get rid of the creature for very long.

I agree with Baffling End . In non-rotating formats, the amount of creatures cmc<4 is way higher than standard.

Acer103, thanks for the feedback, I prefer Baffling End because it hits the majority of creatures we want to in the early game, and the big draw to it is that they don't get their creature back if they remove the Baffling End .

In testing, myself and some people from the enchantress discord server found that we rarely missed the flash from Seal Away , and permanently removing the creature was just better value overall, and worth the slight drawback

I really like this build. I think the inclusion of the GW planeswalker really does strengthen the deck. It doesn't have a place in modern or standard, but I think Pioneer is just right. I also agree that deck selection is very important. The planeswalker also forces the opponent to look at a second target instead of touching the enchantments you're putting on the board.

I'm not a fan of Baffling End though. Would Seal Away be a better alternative?