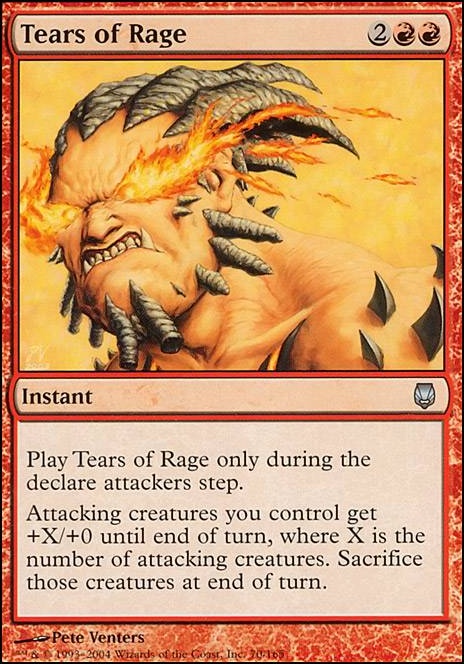 Play Tears of Rage only during the declare attackers step.

Perhaps seal the deal with Tears of Rage? Gotta fix that trample though.
How about Might of the Masses or Chorus of Might for commander damage.

Overall, the deck looks solid and I don't see any staples that you're missing, maybe a Goblin Vandal . I would just replace a few mountains with: Hall of the Bandit Lord , Strip Mine , and a Cavern of Souls if it's in your budget. You also might want to try Tears of Rage and Hellrider for more kill potential.

You might appreciate Dolmen Gate as another way to have Marton (and everyone else) attack turn after turn without worry. There's also the option of just giving him something like Tenza, Godo's Maul and swinging with a 4/4 trampler. There's also Tears of Rage if you essentially want to double up on his mass-pumping ability!

Tears of Rage in for Stolen Strategy

This is to playtest Tears, and Strategy is the least impactful card right now. I think I could set up some really strong turns with this card, especially in conjunction with a lot of the other effects I have.

Blue Sun's Zenith over Stroke of Genius for the recursion possibility alone. Throne of the God-Pharaoh is also really good damage output, Coat of Arms makes it to where lethal damage can come out of nowhere for your opponents. Also Tears of Rage is a cheap uncommon made for this deck.

Well, as it says in the description, the deck is designed for 1v1 matchups, so with i.e. Tears of Rage, my whole board gets +7/+0 on turn 4 at least. The tokens are there to attack, not as fodder for Prossh.

Hope that clarified it!