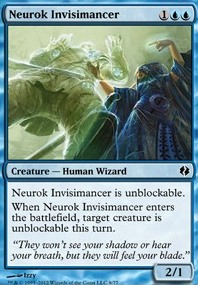 When Neurok Invisimancer enters the battlefield, target creature is unblockable this turn. 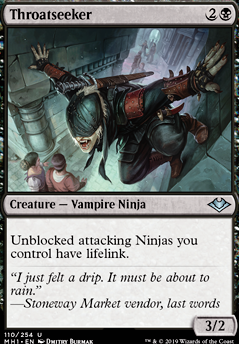 I Talk to the Wind

Several of your combo pieces do not synergie well with Adeliz, the Cinder Wind 's ability. E.g. Ghitu Journeymage is almost only useful during the combo. Outside of it they are not evasive enough to get past opponents' creatures to reliably make use of the commander's +1/+1s. Wizards such as Neurok Invisimancer or Thalakos Seer can make the +1/+1s count every turn, and are instagibs once you are comboing off.

Also, why no Stonybrook Banneret ? It fits both perfectly in a wizard tribe deck and synergies with the commander's abilities due to Islandwalk well.

Drowner Initiate and Ghitu Journeymage are two more cards I would cut. Instead I would add Merchant of Secrets , it's much more useful during regular play and almost as useful during the combo.

Two other cards that fit well within this deck are Compulsive Research and Deep Analysis . Once you are comboing with two Archaeomancer / Izzet Chronarch / Salvager of Secrets / Scrivener you can mill your opponents with those two cards.

Relic of Progenitus can shot yourself in the foot if you are exiling a card you still need from your own graveyard. An possible alternative is Tormod's Crypt .

Cool deck! It's cool to see the new ninjas in action. How about Neurok Invisimancer ? It seems janky, but I think it synnergizes quite well with Ninjutsu.

Hey, nice looking deck! I noticed you helped me out a bit with my take on Yuriko (Yuriko WiP) and I wanted to leave some feedback on your list in return.

For starters, I would highly recommend Gurmag Swiftwing . Having evasive creatures with haste is a fantastic way to get the ball rolling again after a board wipe, and the only card I could find that does it better is Nether Traitor which currently runs for about 15 bucks. This one's only 20 cents! Wharf Infiltrator is also pretty nice (although not hasty), and combos very nicely with your plan revolving around Library of Leng .

I'm not too sold on Mana Leak in EDH in general, especially in a list that wants to be throwing out a bunch of creatures early and not really wanting to pass turn 2 without some type of creature out. As a replacement, I would suggest adding in a few more 3-drops, as that slot is looking pretty light for how many awesome cards you can put in there. From evasive creatures such as Neurok Invisimancer or Shadowmage Infiltrator to some value generators like Thada Adel, Acquisitor and even a way to directly tutor out your Arcane Adaptation through Perplex , there's a lot of options that can go in the 3 slot to make sure your curve never lets up. One of my personal favorites that I'm trying to find a spot to fit into my own list is Quietus Spike , which can quickly close out a game with all of your evasive creatures. Dimir Keyrune I feel also deserves a spot as a mana rock that you use in the early game that transitions into a near-guaranteed proc for Yuriko whenever she dies in the late game.

Another recommendation I have that also helps to keep the cost down is throwing in Liliana Vess over Diabolic Tutor . This is not only cheaper, but also has a stronger proc off of Yuriko as well as giving a continuous source of tutor-to-the-top effects to hopefully keep slapping your opponent for 8-10 damage a turn. Her +1 is also pretty nice if you're trying to hate out a specific player, and her ultimate is game-winning if the match goes on long enough.

Another fun card that I'm in the process of testing out is Shirei, Shizo's Caretaker I'm not sure how valuable it is to bring back all your little guys if they get removed, but it could help with blocking if you needed to chump out some larger threats.

For landbase, I think that a Rogue's Passage could help in times where there's no safe time to swing in with some of your ninjas, and still functions just fine as a land when you don't want to pay 4 mana for something like that. Halimar Depths has good synergy with all of the top manipulation in this style of deck, and is definitely on the cheaper side of nonbasic lands. This is similarly true for Temple of Deceit and Path of Ancestry , but those are a little bit pricier. Lastly, Faerie Conclave can provide an evasive creature for your ninjas in a pinch, and you don't lose much for including it either.

Hope you find success in your matches!

For your budget Neurok Invisimancer could be pretty good. And if you're running cards like Propaganda I'd consider a Maze of Ith as well for further protection, though it's a bit pricier.

Ninjas of the hidden leaf village

I've tried playing around with a blue/green ninja deck before, and I found Jhessian Infiltrator was a great fit for an evasive attacker. It also has enough power that it can take some swings at your opponent if you don't have anyone to ninjitsu out. Mystic Snake is likewise a great option, since getting to reset its counterspell ability can be very powerful. In terms of giving your ninjas evasion after they're already in play, Higure, the Still Wind, Rogue's Passage and Neurok Invisimancer are all good options.

You can see the build I settled on here: UG... ninjas.

White destroy all creatures type cards mixed with blue counters and unsummons could help beat it. Wrath of God is a good example and there are many variations of it. A heavy control deck with a few unblockable creatures like Latch Seeker buffed with Unstable Mutation would help help you beat him. I dunno what your budget is or cards on hand but a white blue control usually (in my experience) murders any green deck. Make a human variation and use Bonds of Faith and Neurok Invisimancer

I agree, I could use more counters and some of the creatures are definitely not optimal, things like Neurok Invisimancer and Latch Seeker are on the chopping block. The only reason Exploration isn't already in is due to budget constraints.