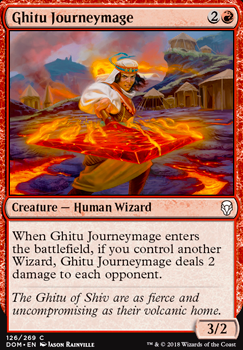 YOUâRE A WIZARD HARRY!!!
by Ebro

You're A Wizzard, Ade
by doctorstrangedays Ditch Dramatic Reversal , it's just taking up a slot. Ghitu Journeymage and Dire Fleet Ravager are not the best choices for this deck. Try swapping these with the combo of Archaeomancer , Peregrine Drake , and Ghostly Flicker , as it allows you to make infinite 2/2s with haste out of infinite mana.

I Talk to the Wind

Several of your combo pieces do not synergie well with Adeliz, the Cinder Wind 's ability. E.g. Ghitu Journeymage is almost only useful during the combo. Outside of it they are not evasive enough to get past opponents' creatures to reliably make use of the commander's +1/+1s. Wizards such as Neurok Invisimancer or Thalakos Seer can make the +1/+1s count every turn, and are instagibs once you are comboing off.

Also, why no Stonybrook Banneret ? It fits both perfectly in a wizard tribe deck and synergies with the commander's abilities due to Islandwalk well.

Drowner Initiate and Ghitu Journeymage are two more cards I would cut. Instead I would add Merchant of Secrets , it's much more useful during regular play and almost as useful during the combo.

Two other cards that fit well within this deck are Compulsive Research and Deep Analysis . Once you are comboing with two Archaeomancer / Izzet Chronarch / Salvager of Secrets / Scrivener you can mill your opponents with those two cards.

Relic of Progenitus can shot yourself in the foot if you are exiling a card you still need from your own graveyard. An possible alternative is Tormod's Crypt .

Izzet wizards or izzet not

+1 for amazing name. Maybe try +4 Shock , +4 Aven Wind Mage -2 Ghitu Journeymage -2 Goblin Electromancer (because not too many spells that benefit) -2 Naban, Dean of Iteration (because isn't utilized too much) and -2 Naru Meha, Master Wizard (because high cost and little benefit). Seems like a fun deck, have a great day!

I would suggest those thing :

All of those should still be budget friendly I think. Also it's just my point of view, you're 100% free to disagree. Good luck with the deck !

I've whipped out the calculator and here's some information you might find useful. While in your current configuration you are roughly 72% to have 3 lands by turn 3 on the draw you are only 53% to have 3 red sources. You also will only have an 80% chance to have black mana on turn 3 (around the same chance that out of the first three lands you draw in a game at least one will be black). In conclusion Goblin Chainwhirler and your black cards are roughly 20% less castable than any other 3 drop.

Obviously taking the above into consideration Mono is more consistent, far less infuriating to pilot and probably better overall. That said, it is also incredibly boring;). As I see it your choices are drop the black cards for maindeck Experimental Frenzy/The Flame of Keld and Lava Coil or run a couple cinder barrens and possibly cut a chainwhirler or two. In addition I'd suggest dropping Ghitu Journeymage and a Dismissive Pyromancer for 2 more Sword-Point Diplomacy and a 3rd Risk Factor. Pointing burn upstairs is how the deck wins and these are usually essential to reaching 20 on time.

Wizards controlled burn on a budget

as a guy who tried REALLY HARD to make Izzet wizards work in standard, it just doesn't stand up to the top decks. Golgari steamrolls right over it, control locks it down completely. Unfortunately the better cards for an Izzet deck right now are the drakes and Niv Mizzet, along with the more expensive card in the format. As a person who prefers a budget deck himself, I just didn't want to dish out cash for the cards needed for a functional build (note: functional, not winning).

All that being said, you already have Niv Mizzets so thats a good start. To be frank, this format is far friendlier to those who run counterspells in the main board and seek a mid-range game or tempo game over an aggro game unless you have 500 bucks to blow on cardboard. Here's an analysis of some of your cards listed:

Adeliz: absolutely fantastic card, I love it so much I moved the deck it fits in to modern format instead. However, 4 is too much as drawing two in a game before you've even got one out means you're down a card and turn to draw more gas to boost your wizards. Ultimately, 3 is far better since that chance becomes a little lower.

Naru Meha: It LOOKS like a card that fits but I assure you this is a budget control card instead. In fact, it's more of an EDH jankpiece than a playable standard card which is a damn shame considering how well it synergizes. However, at 4 mana with double blue cost, plus an average 2 mana needed to cast something for it to copy beforehand, you're not playing this thing before turn 6 at best. That's fine, ultimately except you've already got a six-cost in the form of Niv Mizzet which is a far stronger card. Now Naru IS an infinite combo enabler but the pieces needed are a little... inconsistent. As such I'd cut them entirely from the deck if your aim is to be fast and consistent.

Stormtamer: This is a really good card but it's situational. If your aim is to use it to counter a spell that could kill your game plan, then yeah awesome. It counters Settle the Wreckage, it counters Planeswalker abilities that target you, and it counters removal. As long as the spell or ability has a target that you own, you can counter it. However I personally find there are faster, more powerful wizards to play for your first match, and thus I usually put two in the sideboard.

Wee Dragonauts: Great booster card but it's not 4-of-great. 3 is good, and probably better in the long run so you don't draw too many.

There are a ton of budget options for faster wizards you could play right now. For example: Viashino Pyromancer, Ghitu Lavarunner, and Ghitu Journeymage. ETB effects can speed up the game really quickly, especially when you have a hand full of burn and some of these guys to play.

All in all, don't forget to have fun, and remember that no one's opinion on your cards is law; not even mine.

What about Ghitu Lavarunner? If you hit the Lavarunner turn one, then then Wizard's Lightning can be played Turn 2. And maybe Ghitu Journeymage would fit. It deals direct damage to the face.

WhiteTiger66, I run a different version of a mono-Red Standard deck that mainboards 4x Goblin Chainwhirler. In your deck, which seems to count on damage amplification from Guttersnipe and Ghitu Journeymage, I don't think you realistically have space for mainboard Goblin Chainwhirler. However, I would recommend 4x Goblin Chainwhirler for sideboard. It absolutely wrecks token decks, which are a serious thing due to Saprolings, Vampires, and some Soldiers. Nothing like seeing your opponent's six tokens be destroyed all at once...