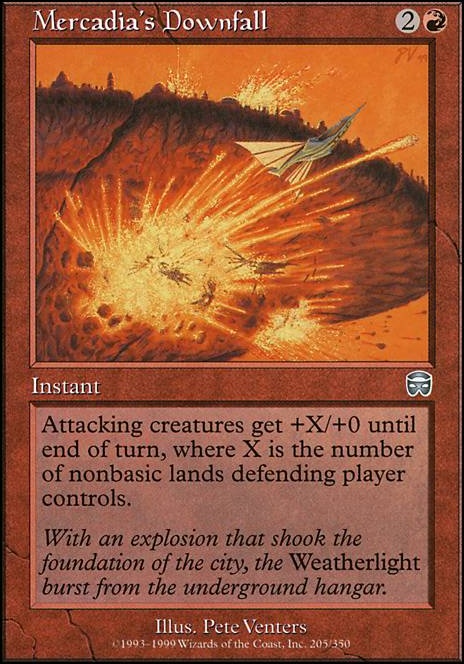 Attacking creatures get +X/+0 until end of turn, where X is the number of nonbasic lands defending player controls.

ArchAngel Of Wrath
by WesomeNight

Legion's Initiative is a good enchantment since it can be a small buff to your board, but it can also get your creatures out of board wipes including the more dangerous ones like Cyclonic rift and Toxic deluge.

Depending on your meta and the decks you go up against Mercadia's Downfall is an interesting instant speed way to take someone out by surprise especially with the double strike your dragons can get.

I would argue with using Ugin, the Ineffable could be a decent planes walker to have in the deck since his plus ability is pseudo card draw, his minus is single target removal, and his static ability will make all of your artifacts cost 2 less.

Dictate of the Twin Gods is something that can also come out as a surprise during anyone's combat phase, using it to cause one of your opponents to take someone out by accident or tossing it during your own combat step to secure a kill.

Hi, the deck is nice!

I once built a deck around goading and combat tricks before Marisi, Breaker of the Coil was printed and now I'm stoked to convert that old deck to Marisi. Have you considered including combat tricks like Berserk , Blood Frenzy or Mercadia's Downfall ? Those cards work very vell with goading. But maybe they would be better in a voltron style version of this deck where they also could make Marisi deal 21 commander damage in a single turn.

@precociousapprentice, I like Praetor's Grasp, but it's also a great way to make enemies! Also, each suggested card requires, first of all, a candidate for removal. So even if a card is good in theory, we need to look at it while comparing to another card we're going to remove from the existing list. So what would you replace with it?

Righteous Aura seems to be better than Sun Droplet in quite a few situations, but the biggest downside is that it needs mana. I'm not entirely sure on this one, since I haven't had enough games with the deck to make a judgement call on it.

And regarding Mercadia's Downfall, I think you've got enough of those cards that win the game on their own, plus I've seen a lot of competitive lists running 80% basics, against which this won't be a threat. Furthermore, if we look at it from the political point of view, unlike something such as Duelist's Heritage you will have to reveal your plans in order to make use of it, as most players won't make a finishing move (such as attacking with all their creatures) without being sure they are going for a kill anyways. However, it might be fine as a card for personal use only in some match-ups, but again, what are you going to cut for it?

What are people's thoughts on Mercadia's Downfall? I feel like it is similar enough to a few cards in here that it should at least be considered.

Also considering the merits of Righteous Aura. Anyone want to comment?

Maybe considering Praetor's Grasp for a Wishboard card. Combo hate and tutor for things I can't play in my deck. With a Chromatic Lantern or another rainbow mana producer out, I can steal removal, counterspells, card draw, a wincon, whatever. Also, don't discount the ability to neuter a combo.

first of all I like the low mana curve of your deck. This is how Edgar Markov should be played!

Hi, I play Gahiji, Honored One myself and decided to build it as a fast and explosive deck. That's why I cut cards like Parallel Lives, Assemble the Legion or Iroas, God of Victory. Especially the first two can go crazy if they stick around too long, but if you're playing in a rather competitive meta, this will not happen.

Altar of the Brood seems unnecessary to me as a secondary win con. You're also helping the graveyard decks with it.

Also, I would cut down on the anthem-effects because Gahiji, Honored One does already provide that. Especially Titanic Ultimatum because it's so difficult to cast. I'd recommend Mercadia's Downfall.

Artifact Mutation and to a lesser extent Aura Mutation are really cool as well.