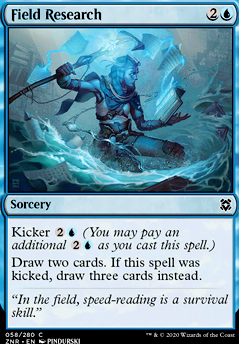 Draw two cards. If this spell was kicked, draw three cards instead. 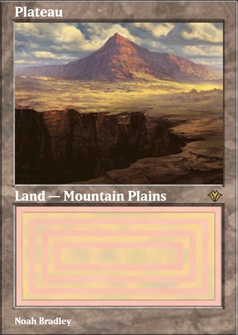 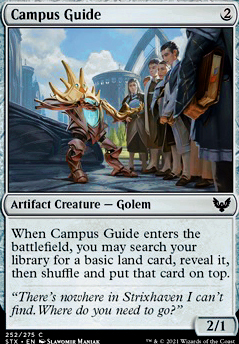 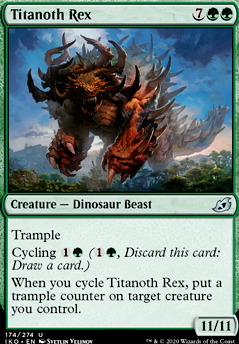 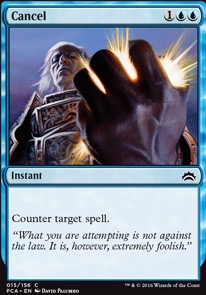 Thanks, harkness, for the upvote and the comment. Jegantha, the Wellspring definitely looks like a good fit. I may have to make room for it in my list. I would ignore the Companion portion and just play it as a regular card, but it also has the possibility of being an alternate commander, which always makes me happy (even if I don't play with it as a commander much I like having the option - the more variety the better). I also like your budget-friendly replacements for the praetors. We could obviously make the deck better by adding all of the most powerful creatures in the game (usually also the most expensive), but it takes a different kind of skill to build decks on a budget. I like your mentality!

As for draw, at least on paper the deck appears to have a good amount of draw options to me. I count 11 cards in the current list that have the potential to net you cards, not including Fierce Empath or Sultai Charm (which don't technically net you cards but do improve the value of the cards you keep). The rule of thumb I try to follow is to have 10-12 draw spells in the deck so it's right there. And I do think it's very valuable to have plenty of draw after your Hypergenesis turn as it usually leaves you with an empty or near-empty hand and you want to be able to recover from potential board wipes.

That said, you're right that most of the card draw is in the form of creatures or enchantments that come down after Hypergenesis . And it would obviously be ideal to draw before your Hypergenesis turn to make sure you have a hand full of threats to lay down. So I did a search for all 3-mana sorceries and instants that draw two or more cards. The best options, in my opinion, are the following: Abzan Charm , Esper Charm , Field Research , Ingenious Mastery , Probe , and Read the Bones . You could also try Fiery Gambit if you have good luck with coin flips (not a card I would want but I imagine some folks would find it fun, and it would be fantastic every time you actually pull it off).

It might be worth it to swap some of the other instants and sorceries for these, so I will definitely consider it myself. I already have one similar card in the list with Dismantling Blow so I'm not sure how many more I would want or which cards I would want to take out. I believe with these cards you would get to draw the cards first and then do Codie's ability to find and play Hypergenesis, but hopefully someone can correct me if I'm wrong. Of course, this also has the potential downside of drawing Hypergenesis and then not being able to find it, which gives me pause. So I'm not sure if it's worth it or not, but it's at least worth considering and testing!

Into the Story seems like an excellent late game card, but might slow down play early on. Glacial Grasp could replace 1, or 2 Into the Story.

Confounding Conundrum is very much a side-deck card. It is not likely that most of your opponents will be drawing and playing an extra land per turn. I like the idea of Keep Safe to counter your opponents effects that could slow you down, while drawing cards to trigger Teferi's Tutelage.

Merfolk Secretkeeper relies on effects that return it to your hand so that you can replay Venture Deeper and Merfolk Windrobber also seems like a rather weak and situational card. I like the idea of cards like Facet Reader and Teferi's Protege to trigger extra card draws and extra mill from Teferi's Tutelage.

Other cards that I would consider (and maybe put in a side-board) are Chilling Trap, Deliberate and Field Research

Hey guys, some cards in the new set caught my attention. Are they:

Roiling Regrowth, you can sacrifice any of the coloress lands that are in the deck to enter untapped and cast the early artifacts to search for two needed basics.

Field Research a solid draw spell, and with the high number of ramp in the deck getting into the six mana isn't hard, so you get a plus.

I was thinking of cutting Sylvan Scrying and Deep Analysis

And, after party prove itself garbage and the price drop to where it should be:

There are already 10 allies that have a party "profession" to reduce the cost of this Tazri and she for herself draw raw allies, so it's good.