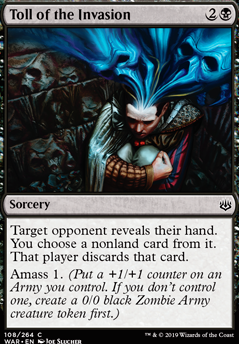 Toll of the Invasion

Target opponent reveals their hand. You choose a nonland card form it. That player discards that card.

This time the bad guy wins
by Fasrielyn 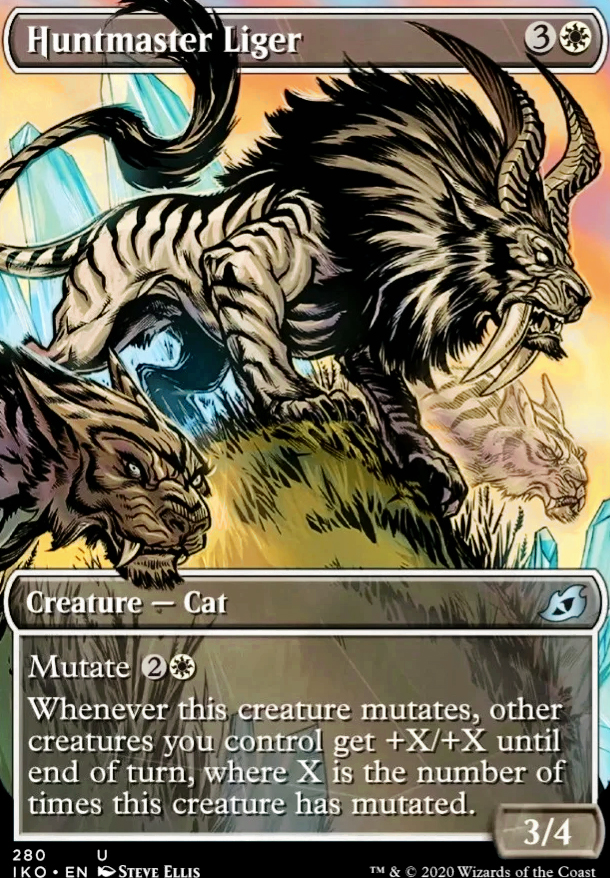 Lord Of The Undead
by Zombiehoarder 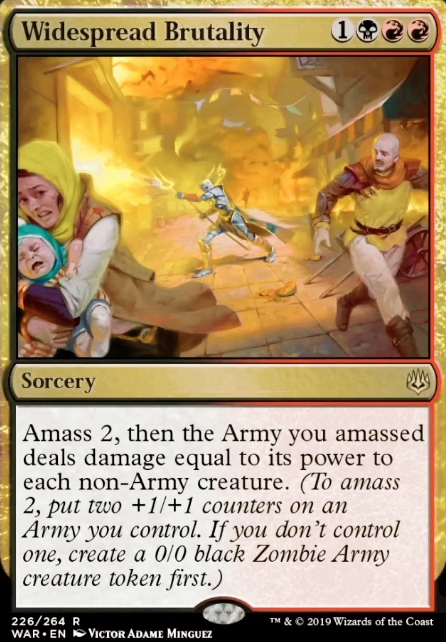 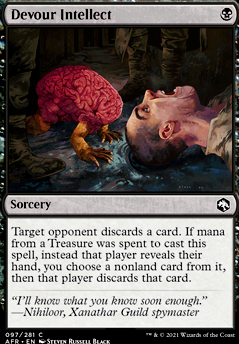 Bolas, Force of Nature
by maestro_di_cavolo

Toll of the Invasion Discussion

ulmo, I've been thinking about your recent suggestions a bit. First of all, yes, I think Bedevil over The Elderspell for sure. The Elderspell is more attractive only really because getting to the ultimate of any of my planeswalkers is almost a wincon. But unless I see a lot of planeswalkers on the other side it really does me little good.

Syphon Mind would be good for the draw, but discard isn't actually a priority for me. Toll of the Invasion seemed good because it's targeted, and because of the amass ability.

Liliana's Reaver and Grave Titan both sound good for my other EDH graveyard themed deck, Cleverly Named Graveyard Deck, because it has a bit more mana ramp. There's definitely some ramp in this deck, but I'm trying to keep the curve here as low as I can get away with. However, Slavering Nulls does for sure sound like a good addition.

hmm... It's a tight list but Toll of the Invasion seems kinda lackluster

Hey man! Grixis is fun. I've got some thoughts... feel free to ignore any/all of them.

There're some cards I think you should consider cutting in order to make room for my above suggestions. Wasp of the Bitter End strikes me as likely too weak in a format with three opponents; similarly, since Toll of the Invasion only hits one opponent, this should likely be considered on the chopping block. I think a boardwipe like Toxic Deluge is probably a lot better than Tyrant's Scorn . Lazotep Plating is probably worse than a regular hard counter. Finally, if you like the idea of artifact-based ramp in (2), thirty-eight lands is too many. I recommend cutting three to five, depending on how aggressively ramp-heavy you want your deck to play.