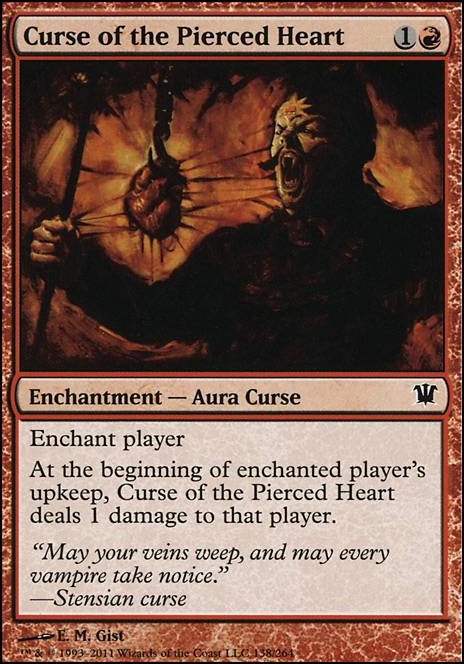 Curse of the Pierced Heart

At the beginning of enchanted player's upkeep, Curse of the Pierced Heart deals 1 damage to that player.

Cursed, Countered and Cozy
by MopeyIzzle

Taste the Rainbow
by WBG Curse of the Pierced Heart Discussion

The deck looks really cool, but I think that there are some sub-optimal card choices in here. I would say that not running Skewer the Critics is a mistake, and you should probably up your count of Rift Bolt I would cut the Dangerous Wager and add some number of Curse of the Pierced Heart. Best of luck playing this!

Out of the cards you suggested, I could see Unstable Obelisk and Leyline of Punishment making it in.

Curse of the Pierced Heart seems like a quick way to make an opponent hate you. If they don't have an answer to the enchantment, they might turn to player removal to get rid of it.

Heartless Hidetsugu is definitely powerful, though it has some rather dampening downsides. At 5 CMC, he will be in the top 10% of the cards by cost. This combined with him not doing anything the turn he is played makes it hard to include him.

Scour from Existence would be the highest CMC card on the list if it made it in. There is a definite usefulness in being able to remove any permanent, but it is just too high CMC to play.

Curse of the Pierced Heart for a bolt every turn on a certain player.

Heartless Hidetsugu for a race you win because you're getting an extra 2 damage each time.

Leyline of Punishment for an answer to decks that have options against burn.

Scour from Existence / Unstable Obelisk since mono-red doesn't have many spot removal options for permanents.

Also, with such low CMC you will be top decking fairly quick, you might need some more draw...-3 Curse of the Pierced Heart , +3 Dangerous Wager (or Tormenting voice, etc)?

Curse of the Pierced Heart

Whenever more than one replacement effect attempts to modify a certain event, the affected player or permanentâs controller decides which one to apply. After that, if there are still applicable replacement effects, they are then applied.

In this scenario, the order of the replacement effects donât matter. Whatâs important here is that one Curse of Bloodletting âs effect will be applied, doubling the 1 damage from Curse of the Pierced Heart . However, the replacement effect from the second Curse of Bloodletting is still applicable so it doubles again, for a grand total of 4 damage dealt.

Hi Zequen! Thank you for your comment :)
Wow, that combo is neat! I may try it one day, actually I already have Havoc Festival in my collection!
You're right, I lack small creatures, so I'm considering addition of more Rakdos-enabling possibilities. Often I ramp pretty fast, so casting 5 or 6-mana-cost creatures isn't a problem. I also have a lot of draw to help me drawing more or less anything I want!
Your example of Curse of the Pierced Heart isn't good because it works only on enchanted player's turn, it should work on my turn to let me cast Rakdos, Lord of Riots . Honden of Infinite Rage would be better in that matter. I am focusing on methods that don't use additional mana resources, like Earthquake or Pestilence . I once used Nettle Drone and Gut Shot but I tried to remove all cards that would be not generic or flexible enough. Cryptolith Fragment  Flip looks reasonable :)
I will consider adding Indulgent Tormentor , but Bloodgift Demon is better, and already present in my deck :)
In my opinion there is no such thing as too much mass removal :D It's just too good when your opponents are faster than you.
Xantcha, Sleeper Agent is interesting. I'll look for her in my friends collections! When it comes to Mana Geyser and Neheb, the Eternal I don't think I'd use that large amounts of red mana. My deck consists mostly of colorless and black creatures, and I don't think it would have big impact on my plays :)
Thank you a lot for your advice!

Let me introduce to you my favorite rakdos combo Havoc Festival + Wound Reflection . With this they have a turn to find an answer or the die. With the alternate win condition section I assume you aren't against them and this one has value when not together as well.

For comments on the deck. You have no early game power creature wise. The smallest creature you have is Solemn Simulacrum . Considering you have alot of rocks and ramp it may be ok. But to me it looks like you want to act fast and you have like 3 card that can get the damage in to allow you to cast Rakdos, Lord of Riots . Which is what helps you cast end game spells. Many people try to solve stuff like this with Earthquake like effects, or if you are desperate Curse of the Pierced Heart . You can also lols people with Pestilence or similar effects. As you can essentially use it to fulfill Rakdos, Lord of Riots damage opponents requirement, then you can use it to effectively pay 1 Black Mana to reduce the cost of your creature spells by 3.

I would be careful with all the field wipes, you have many great creatures and field wiping alot is counter productive to that strategy. I would replace the field wiping demons to Bloodgift Demon and Indulgent Tormentor instead, as they would be great adds to the deck as the could fulfill the damage requirement and give you card advantage.

I would Personally try adding in Xantcha, Sleeper Agent , as it is card draw and while it is out you can pay 2 extra to cast Rakdos, Lord of Riots . Following the game plan of Rakdos, Lord of Riots you should think about Neheb, the Eternal as well, as it plays the game of damaging people to get "Mana" to cast big spells. A surprise card you can get people with is Mana Geyser as it can easily get you like 12-17 Mana on turn 5 in a standard commander game (4 people).

Darth_Savage, Thanks for your feedback! This is actually kinda inaccurate. I mainboard Fiery Temper, not Curse of the Pierced Heart. I usually don't get enough black mana to use Alms of the Vein, in my experience. Also, the 14 lands may seem too low but has yet to be a problem Frankly, I just mulligan to at least one land and a Faithless Looting, or Runaway Steam-Kin and Simian Spirit Guide. I need to get Blackcleave Cliffs for my mana base as well.

I run the Gurmag Swiftwing for its flying. It's replacing Falkenrath Aristocrat. I understand the Pyromancer Ascension and Quest for Pure Flame, but it is my response to Lantern Control, which tends to prevent me from getting any burn spells. The Curse lets me use attrition against them.

OMG, Bedlam Reveler is amazing!! It's going to be my new topper, much better than Experimental Frenzy and Falkenrath Aristocrat.

Reckless Rakdos (Ideal) Is the better version of the deck.