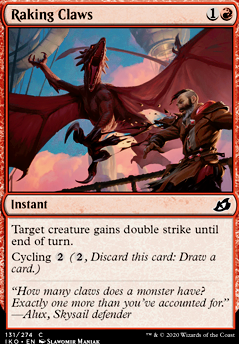 Love Affair of Ramirez and Jeska
by jconeil1988

Thanks for the suggestion, definitely a great option! I honestly overlooked this card for Raking Claws when I attempted to run more than the playset of battle rage as damage doublers. The balance of effects in the deck feels pretty good to me right now, but if I shift things to include more damage doublers in the future, I think this is an obvious include.

I love this style of deck. I have a friend who made one that can aggro and kill as early as turn 4 with cards like Unleash Fury and Raking Claws . Both good adds here, by the way. He also used Riddleform as an additional beatdown, which works better than Fervent Champion. I'm not really sure what the artifacts are doing here. They're a little slow for this kind of deck.

More cantrips would be good. Cards like Crash Through are totally acceptable just for the spell cast and the card drawn. I would also love to see a deck like this use Orvar, the All-Form , although I'm sure there's a reason I haven't yet. Imagine every time you cast a pump spell, you made another sprite dragon and made all the ones you already have even more lethal! I'd also suggest another few lands ( Temple of Epiphany works) because even though your curve is low, you'll be using a lot of mana every turn to cast a lot of spells!

Here's the friend's video by the way if you want to see his list and how it worked. https://www.youtube.com/watch?v=pJnbfWxjv-c

Looks interesting, I wasn't sure how to go about building a berserker tribal deck but this seems just fine.

I'm not a big fan of Arni Brokenbrow though. A 3/3 haste for 3 isn't that great, otherwise it's a 4/3 for 4, maybe a 5/3 at best. It's okay-ish but it's really nothing special (especially if you compare it with something like Questing Beast ), on top of being legendary. Maybe I'm too quick to judge, but since you have so many boast abilities, I think you should run only 2 Arni Brokenbrow and add 2 Birgi, God of Storytelling Â Flip instead. Either side of her would surely be more impactful to your games.

I think Raking Claws can be nice but it's not like you need to have that combat trick available all the time. I would only run 2 instead of 3 and add a Rise of the Dread Marn instead. That card produces berserkers so it would fit right it, and it would be a nice answer to a board wipe, which is probably the biggest weakness of a deck like this.

Yes ExpozeD, Thanks, another good suggestion. I have often looked to use Embercleave and it is a good alternative to Raking Claws, which is currently in the deck.

BioProfDude, I'll probably wait for a few more comments before editing my deck, but it seems about right. Though I definitely want something that aids my direct damage to face, while pumping up Prowess. I'll replace either Warlord's Fury or Raking Claws. Crash Through's trample is too important, because Soul-Scar Mage can allow my spells to weaken creatures so my damage goes through. Still wonder whether an instant is better. I already have Bonecrusher Giant taking the place of Wild Slash and if damage prevention is that shitty, I can swap in Skullcrack. Lightning Strike allows me to make use of my colorless mana, and is a tad stronger.

I think you want a few more instants in the mix. I'd include Wild Slash and maybe Lightning Strike in place of Warlord's Fury and Crash Through. I know, I know, the card draw, but you also have Light Up the Stage and that should probably go to 4x, probably losing Raking Claws to make room for the two additional copies. Just my two cents, if it's worth even that much. :-)