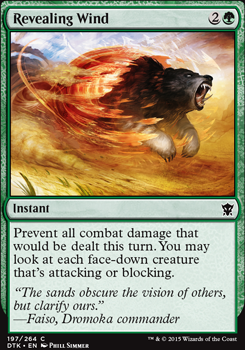 Prevent all combat damage that would be dealt this turn. You may look at each face-down creature that's attacking or blocking. Quest Through the Fog
by KuribohJesus Please Bear with me
by Legius

You beautiful son of a bitch. I can't believe no one has tagged me in this yet. You know, I completely missed Repel the Abominable getting printed and I've been bitching forever about not being able to play Standard Fog since we lost Revealing Wind. You've inspired me, this is wonderful. I know what I'm going to be doing today.

You have a Zada, Hedron Grinder in the deck, but I didn't see any instant or sorcery cards to take advantage of his ability. Even a one or two card package, say Uncanny Speed or Temur Battle Rage would better benefit you. If you've had enough time to develop, it could be a psuedo-viable win con.

There is also an almost total absence of ways to interact with cards that aren't Planeswalkers or creatures. I don't think it would be a bad idea to cut some of the creature spot removal in favor of a couple of the best artifact/permanent removal instants. Vindicate, Terastodon, and Merciless Eviction are all great cards, but they are the only way to deal with something like Torpor Orb, which would take a big giant dump all over your face.

There are some card choices that I'm sure are dictated by their availability and not your personal preference. Having Cancel in there when a single

counter like Arcane Denial or Swan Song would be a straight upgrade. Confirm Suspicions is over costed for what it does for you. Five mana for a counter and three cards for another six mana is just a little bit too slow for me. Consider adding an All-Star like Capsize instead.

Conspiracy is a good include and tutor target if you're going to be running more than five creatures that aren't Allies. As it is now, I think it's not doing you enough good to be pulling the weight that a five mana enchantment should. Mirari's Wake is something more along the lines of what I would look for to get a couple turns of benefit out of before someone blows it up. Oath of Nissa needs to get cut. All you need is

for Gideon, Ally of Zendikar.

I'm still bringing you a Constant Mists to put in here instead of Revealing Wind. That shit is trash.

Amulet of Vigor is only as good as your ability to use it. Tutor for it the first chance you get. It will be a huge difference maker in terms of how smoothly and quickly your deck will work.

Other than all that, I can't wait to see how it runs.

Catching up on comments ...

michael921,
I forgot to mention earlier: Yeah, I had forgotten about the Crater Elemental earlier, and +1 on Duskwatch Recruiter  Flip ... that's just SUCH a great card! As always, thanks much!

Kizmetto,
I also forgot to reply to you earlier. Gaea's Revenge is cool, but I don't think it's a good fit for this deck. If I decide to add a seven-drop sometime, I think it'll be World Breaker. Thanks though!

Argeaux,
Thanks much for investing your time in playtesting the deck; I really appreciate it!
Yeah, it's kind of like MetaMaster22 said ... beating Languish is only beating part of the removal challenge ...
I'm not sure about Foundry, but I'll give it a hard look. I was thinking about going Temur too, partly for counters, but also for Wandering Fumarole ... which would be even more amazing with Assault Formation.
I used to play a ton of Fog effects; not entirely sure why I got away from it; I'll definitely give Revealing Wind a hard look too.
Thanks again, tons!

I've playtested this a few times now against Cast a Shadow, which I am guessing is its major competition.

It wins if Shadow has a bad draw.

Unfortunately, it often runs out of Creatures otherwise.

To this end it might help to add Foundry of the Consuls, because there are no Lands that turn into Creatures in your colours.

I think you would do well to add a fog effect to your Sideboard. Subbing Revealing Wind for Kozilek's Return might help. It can be amazing to stop your Opponent's last "killing blow", leaving them with no blockers as you hit for game.

It will very much depend on whether or not you have a lot of */2 Tokens floating around in your meta.