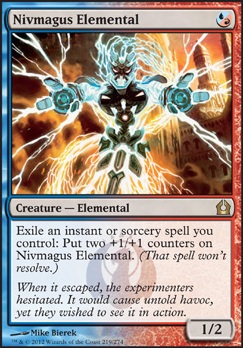 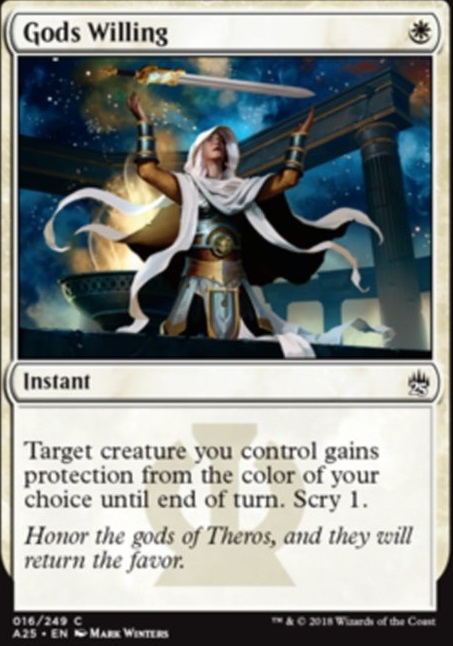 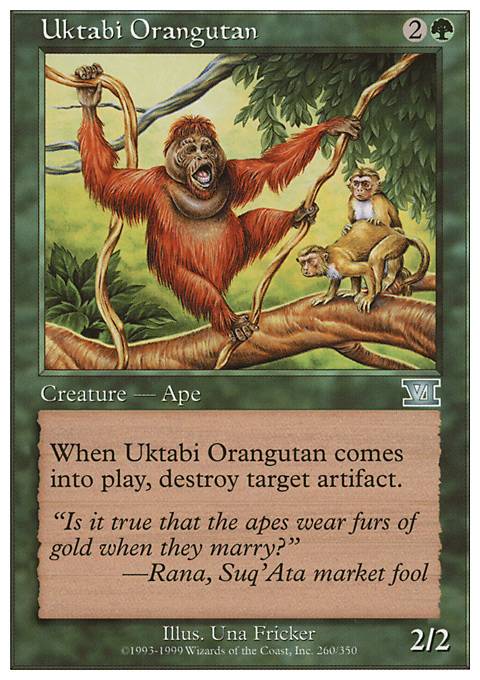 Chandra and Her Magical Miscreant Tour v.5.0
by birdcageman

sergiodelrio on Bug with "exclude color"

So I'm building a UB deck with Nivmagus Elemental but when I try to exclude red with the feature I get an error message (Exclude colors: '[u'R']' is not valid JSON.) and the deck doesn't save.

Might be related to the card being hybrid, but then again, that's what the feature is there for, no?

lagotripha on Cards for Blue/Green Elemental

Temur elementals feels the way to go. It also gives access to Young Pyromancer which gets a little silly with reef.

Its worth looking at turns 1-2-3 and planning around that- elementals has amazing options;

There is enough support for pretty much anything from control to aggro- it just needs a dig into what synergies you need and what supporting cards make that good.

I used to bring a version of this to my local game store a few years ago. Without Nivmagus Elemental as Flusterstorm was not modern legal.

Anyway, I found that the games I won usually involved Ninja of the Deep Hours and Wingcrafter . Maybe there's no space for Wingcrafter with the new cards, but maybe you could consider trying it out, seems like giving evasion to Nivmagus could help against some decks.

captainamerica on Budget-ish deck to compete with ...

I'm playing a budget UR Delver of Secrets  Flip deck featuring Nivmagus Elemental and Gigadrowse , which makes the matchup miserable for mono-green infect. If you use it to tap down their lands at the perfect time, they lose their ability to keep up. e.g. being turn 2 in their upkeep tap down their land, they can respond, but it forces them to use their combat tricks in their upkeep and prevents any surprise blowouts.

I'm not a huge fan of Mark of the Vampire when compared to other modern enchantments- most of the non-boggle auras are 1 drops that replace themselves ( Rancor , Curious Obsession / Curiosity etc).

If you desperately need lifegain, specific sideboard options should be more reliable- Fountain of Renewal is decent.

I'd look at alternative counter sources for Thoughtbound Phantasm and try to back it up with other efficient 1 and 2 drop threats. Blue actually has a few of these which are pretty decent- Cloudfin Raptor , Benthic Biomancer , Cosi's Trickster , Dimir Spybug , Nivmagus Elemental and Thrummingbird are all worth testing. Backing them up with some Tezzeret's Gambit can push through a lot of damage when backed by your current disruption.

Manamorphose would be amazing here.

Also, instead of Vexing Devil, I suggest you play Nivmagus Elemental; it fits a lot better with what your deck is trying to do, and if you played Nivmagus Elemental with storm cards (I suggest Ground Rift since it's only 1 mana and can get rid of blockers, but Grapeshot and Haze of Rage are also options) and "free" spells (you already have Mutagenic Growth but there's also Gut Shot, Manamorphose) you could cast several spells in one turn and play a storm spell, then use Nivmagus Elemental's ability to eat each copy of the spell. The buff sticks around for next turn too, so you don't necessarily have to kill them that turn.

At the end of that sequence the Elemental becomes an 11/12 with double strike. You don't even need to have a Simian Spirit Guide for it to work, plus a draw such as the one above isn't at all unreasonable.