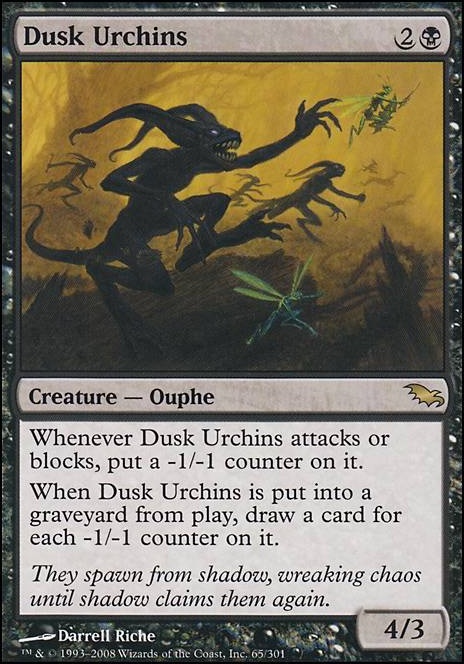 Whenever Dusk Urchins attacks or blocks, put a -1/-1 counter on it.

When Dusk Urchins is put into a graveyard from play, draw a card for each -1/-1 counter on it.

Dusk Urchins occurrence in decks from the last year

It seems to be running more smoothly and a bit more aggressively with Dusk Urchins . The incidental card draw makes up for losing Bankrupt in Blood .

I would like to reduce average mana cost, as 3.03 seems really high. But I have no idea what could make room for it, short of moving Necroskitter to sideboard... but then, what is removed from sideboard to accommodate the 'Skitter?

Put PTA and Channeler Initiate back in, removed both Bankrupt in Blood to make room for Dusk Urchins . I think Urchins effectively replaces BiB, a little higher CMC but it's a body when I need it.

Consider adding Nest of Scarabs . Itâs much more mana efficient than Flourishing Defenses if you donât have an elf-based lay-off. Also, Noxious Hatchling is an absolute bomb in this kind of deck, particularly when one or two Nests or Defenses are in play. Perhaps replacing some of the creatures with a couple copies of Dusk Urchins could be a move as well for card draw.

Zakuzelo... Necroskitter has been useful in the past in conjunction with Fate Transfer (no longer in the deck), Hapatra, Vizier of Poisons , Blowfly Infestation , and Soul Snuffers . But it's only useful against non-token creature-heavy builds. Unfortunately I'm not seeing many of those builds lately, and so it's a piece of combos that are somewhat pointless, at this time. I agree about Dusk Urchins . Could be worth trying. As far as reliably drawing Hapatra or Nest of Scarabs... it's generally not been an issue to have one or both from the opening hand. But it does happen that I don't, and usually at the worst possible times. As far as the larger creatures you mentioned... I don't think I could afford to slow this down any more than it already is. While I take pride in trying to cobble together a viable build, most people I play against are netdeckers and are slinging top tier decks; fast is an understatement. I'm going to consider Dusk Urchins. Thanks!