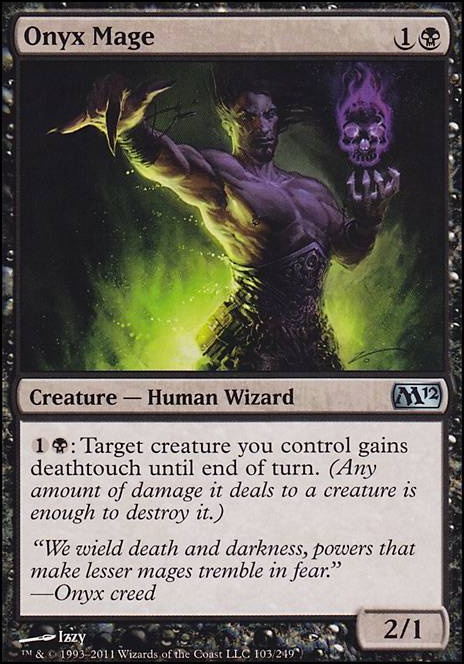 1{B}: Target creature you control gains deathtouch until end of turn.

Kelsien, the Plague
by BoniM

Hidetsugu, Kiss of Death
by Ziabo

If you're going to run Sanguine Bond, you should definitely run Exquisite Blood. These cards enter an infinite loop, so they automatically win you games! Also a couple of other tips for mono black, Cabal Stronghold is a beautiful card here, as well as Dread Shade. I'd recommend cutting the Onyx Mage for something with more punch, like a Gifted Aetherborn or Vampire Nighthawk. If you want your creatures to have deathtouch, put a couple of Archetype of Finalitys in your deck. Also, if you are playing successfully, Cryptolith Fragment  Flip is going to be a dead card, as you always will be gaining life and thus above ten, so it won't flip. The stronghold should net you plenty of mana, but the tried and true Dark Ritual is a mana pump if you think you need it. Good luck!

Alright. The croco is in a fairly convenient spot, not dying to Fatal Push w/o revolt. Could be a good 3-drop for Zombos? Damn shame its only evasion is Afflict. I don't know why everyone mentions Rhonas, that seems like a horrible idea to me. He gets turned off again almost immediately, and they're on the same spot of the curve...

Of note, it still dies to many removal spells and any kind of above-curve blocker.

Unravelling mummy looks pretty crap for anything but limited. I mean, it's an Onyx Mage that's way more conditional and just a bit more powerful.

Splendor is wonderful. Horribly overcosted, so pretty much restricted to EDH play (Curse of Misfortunes in Modern if you're feeling ballzy). But... Humility! For one player... Nah, there are better things to do with 8 mana. This calls for a pretty specific deck.

Also, that looting 3 drop is really cool. I'd play it in a combo deck in standard. A reanimator deck if I'm feeling adventurous.

And yes it is tough, but it's part of the reason I tried to make these decks. I don't want to keep it just under 15$, I want each card to be well, super budget and cheap. I'm very much of the opinion that you can make fun, interesting decks without immediately jumping into the big kid budget pool:P Which generally means foregoing some options that would make more sense. That and forcing yourself outside the Sol Ring/Demonic Tutor in every deck mold is refreshing IMO.

Puppet Strings is in another budget deck I have on here and I somehow completely forgot about it, thank you!

What I went for with this deck was not so much just to punish with minor amounts of damage, but to add things like Fang Skulkin to make the ping damage into -1/-1 counters, or Witch's Mist, Gorgon's Head, Onyx Mage, and other deathtouch/wither/infect givers to give the pingers a way to kill with the lightest amount of damage. The goal is to ping all their creatures down, then whap them to death with Wauki or anything else really until they're dead.

I am a bit light on protection and recurr-and that's mostly just a budget restriction problem(sadly, Mask of Avacyn has been fluctuating, so I haven't been able to keep it in a lot of these decks). I've been toying about adding Endbringer's Revel since it's a cheaper($ wise at least) way to recur, since I can remove enemies so easily I might give it a try.

I like a lot of your suggestions, but almost all of them are too expensive for the deck's budget :(

Remember to upvote if you liked it though!

Pieguy396 on What are the best colors â¦

Not to rain on your parade, but before you commit to anything, I think you should make a list of possible pingers, as I'm not sure how many there actually are. I think a deck like this would probably be better suited for Modern, where you can run multiple copies of the important effects like Quest for Renewal.

That said, I think the best colors for a pinger deck would probably be Jund (). While you would lose access to Prodigal Sorcerer, Black has deathrouch-givers like Onyx Mage, Deadly Allure, Virulent Swipe, etc. that you can use to give your pingers : Murder.

From the Pinnacle to the Pit

You could add Voracious Hatchling, Archangel of Thune, and True Conviction for added lifelink bonus. Also, you could incorporate some form of Ajani for even more lifelink benefits. If you want more deathtouch in your deck, you could add Onyx Mage, and, if you have a bigger budget, you could add Wurmcoil Engine for both lifelink and deathtouch benefits.

hi metal :) thanks you very much for your suggestions!

this is my first commander-deck. it has been Born about 1 month ago and i threw Cards together i already had left at home (i just bought damia). i totally agree with the named questionable cards.

Pulse of Llanowar did a great job with all these Basics... yet, but of course i will go ahead with my landbase by getting some duals. nice side-effect of pulse was, that most Player just looked at my manabase, saw that all Islands where tapped, played a spell and started crying when i threw a Counter.

Fog of Gnats and Malakir Familiar just filled Slots for blocking Flyers. Onyx Mage just filled a Slot as a blocker too and he supports the tokens in a good way (noone wants to lose his/her creatures to a 1/1 deathtouch token).

Manalith, Frontier Guide and Opaline Unicorn where my last backup for mana-fixing. they'll get replaced as soon as possible with good ramp spells.

next Goals would be Tooth and Nail, some more countermagic and manaramps. upgrading the landbase of course too...

what is your oppinion on adding more countermagic?

I'd suggest the following replacements: