, : Return target artifact or enchantment card from your graveyard to your hand. Hanna and her toolbox
by wanyekess

Ship parts and a beautiful mechanic
by Stoutarm 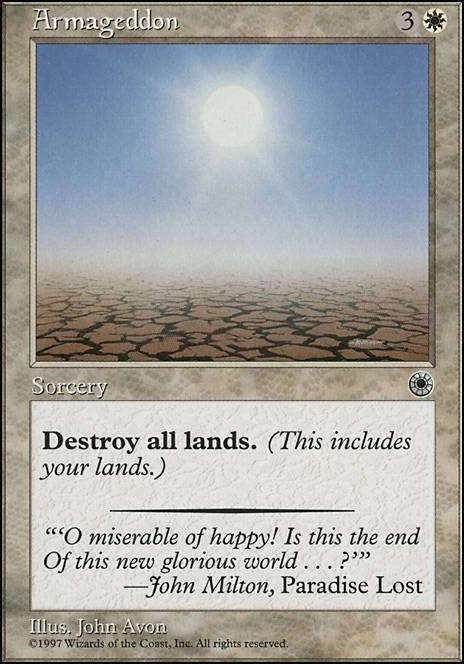 if you're not worried about recursion, Planar Void pairs with Energy Field stupidly well.

Solemnity also works well with Delaying Shield , Decree of Silence , and Force Bubble , although they aren't searchable by zur.

if you do want recursion, Hanna, Ship's Navigator and Hall of Heliod's Generosity are what I would recommend

Peoyogon as of right now I'd really like to make a Dromar, the Banisher color manipulation deck...but that's very ambitious. If it proves too difficult I'll probably go with Hanna, Ship's Navigator. Right now I have a decklist of applicable cards on Archidekt here hopefully I find the time to put into it soon.

I absolutely love your deck because it just brings back this mono-colored nostalgic feeling. I used to love Fallen Angel and the fact that it could be replaced by a million and one modern cards but still makes it into your deck is glorious. I'm really hoping to be able to capture that feeling with mine.

This a great resource and seriously affordable. I have always wanted to make a group hug deck and didn't want to use Phelddagrif. I'm thinking of adding some more life gain pieces to incorporate Aetherflux Reservoir as an alternate way to knock some players out. I also have Hanna, Ship's Navigator to help recur any enchantments or artifacts that may have gotten destroyed.

Also, I always recommend cutting Temple of the False God. It's just not good enough and can easily result in a dead land drop early game.

I would personally recommend running some counterspells and removal in the deck as it's currently very fragile to interaction.

Also I think some ramp (land and/or artifacts) could help as well as your progression is going to be very linear with this deck and could easily be outpaces by someone with a more aggressive mana base.

Massacar Decree of Silence is definitely going into the deck. Because why should anyone but me get to play the game lol? A bit pricey, but it's not too over my budget and probably won't be too hard finding a deal on. Dark Depths is a card I forgot existed, but between it and Decree, I'll probably opt for Decree. Will definitely keep it in mind, though, and might use it in my online builds if anything. Cauldron of Souls is neat, but sadly the creatures given Persist lose it after they return to the battlefield. Still, if I have enough creatures on board I'm probably not going to sacrifice the same creature anyway.

saluma That's fine, I think the people I played with already hated me anyway because of Yawgmoth lol. I definitely wouldn't mind building this deck in such a way that it becomes very hard to successfully resolve anything and advance your gameplan, but I'd still like it to be as proactive as possible so I'm not just standing on a back leg the whole time. I like a lot of the cards you mentioned, particularly the first 4.

Omniscience_is_life Aphetto Alchemist and Minamo, School at Water's Edge are the best of these due to low to no cost and free or low activation requirements. I would prefer to have free untap effects, that way I still have mana open for Ertai's ability.

RiotRunner789 Hexmage is cool, though I do wish it was a repeatable effect. That might have been broken if it was, though. Anyway, were I to go Aristocrats, what cards would you recommend that sacrifice for value? I have a Yawgmoth Aristo deck, but that essentially runs solely off of Yawgmoth, Thran Physician. Additionally, I think wheel effects might be preferable to mill effects, especially since in these colors I can use stuff like Notion Thief to ruin everyone's day.

And yes, I was definitely going to include Ertai's Meddling in the deck for the flavor AND utility. The best kind of flavor inclusions, really: stuff that's in theme and that's actually effective on its own.

SynergyBuild Very cool post! I was initially thinking of making this an enchantment-based deck, but I couldn't really find a lot of worthwhile enchantments that provide immediate value or value when they leave the field. They also seem fairly hard to recur; Heliod's Hall and Hanna, Ship's Navigator are the only two cards I can think of that let's you consistently recur them. I looked at the Enchantment Creatures as well, but... a lot of those kind of suck lol. Do you have any other enchantment suggestions of the kind you mentioned? Maybe a list I could look at for ideas?

I definitely didn't want to just make this a counter on a stick kind of deck, which is why I wanted to take this in a reanimator/theft direction so that I'm always doing something each turn.

I think overall, I'd like this to be primarily a reanimator deck with an aristocrats subtheme, but I'm definitely open to many other suggestions seeing how this commander is pretty foreign to me. Tried to build him a long time ago, actually, but it sucked. Now that I'm (hopefully) a better deck builder, I'm trying my hand at it again.