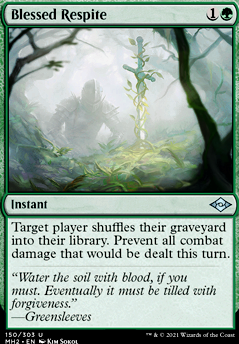 Target player shuffles their graveyard into their library. Prevent all combat damage that would be dealt this turn.

attack of the shrines
by ET_ASH1228

Kodama of the Modified Tree
by AromontTheDruid 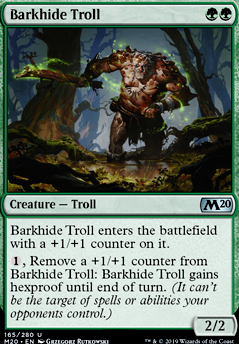 Delphen7 on How to Handle Quality Changes â¦

Say Player A casts Moonlace on some nonpermanent spell, such as Lightning Bolt (that is controlled by Player B).

Moonlace has these rulings: "Moonlaceâs effect doesnât wear off." and "If Moonlace is cast on a spell that becomes a permanent, the permanent will enter the battlefield colorless and will remain colorless until it leaves the battlefield (or until another effect changes its color) ". Since Lightning Bolt is not a permanent, it will ostensibly be colorless in the graveyard.

Say Player B casts another Lightning Bolt. There is now a colored Bolt, and a colorless Bolt in the graveyard. If any player casts a shuffle effect, such as Blessed Respite, there is now no way to differentiate the two bolts from each other.

Since it could matter which bolt is which (For an effect like Ceremonious Rejection), how does the game handle differentiating each one?

wallisface Thank you for the feedback! I want to answer some of your suggestions.

*Note: Thank you for the Ensnaring Bridge suggestion. I will add it to the Maybeboard along with Pyxis of Pandemonium.

P.S. I will be releasing an actually competitive version of this deck very soon. It's definitely not budget, but it's really good and consistent.

So you missed some stuff you should definitely fit in: Blessed Respite, Encircling Fissure, Knight-Captain of Eos, and Slaughter the Strong. Similarly, Blunt the Assault seems like a must given your lack of life gain and your wincon requiring a large life total. I'd also look into more life gain in general.

nbarry223 on Bringing Turbo Fog to the â¦

I've always liked fog effects that can be put on Isochron Scepter and give you more than just damage prevention.

Pollen Lullaby can potentially buy 2 turns and is basically a double sided scry for you and your opponent (could be beneficial or detrimental depending on the deck).

Dawn Charm lets you prevent targeted burn damage or curses etc. in addition to the Fog effect if needed.

Blessed Respite just helps to give some recursion, or gravehate if needed.

You can also throw in cantrips like Manamorphose which turn Isochron Scepter into tap to draw a card and manafix.