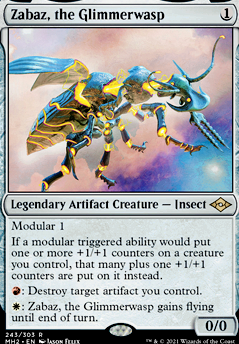 The main idea of this deck is to buff one creature with a lot of counters and Fling it targeting the opponent.

Hardened Scales, Zabaz, the Glimmerwasp, Invigorating Surge, Ozolith, Arcbound Shikari put a lot of counters. Then you can do combos like: Attack with weak creatures and one tough. Opponent blocks tough one, so you Fling it before deal damage targeting the opponent and put all counters (possibly even more counters if you have Scales or Zabaz on the field) on an unblocked minion, making it deal massive damage. If you have Zabaz on the field, you can use it's destroy ability to do the same, but without Fling direct damage.

Alternatively you can use some cards, that makes blocking your big creature more difficult like: flying (Zabaz and Arcbound Stinger), trample (Arcbound Crusher and Skarrg, the Rage Pits) or just destroy block using Dromoka's Command fight.

Arcbound Mouser + Dromoka's Command gives you much life if it has many counters.

Snakeskin Veil prevents the enemy from destroying your creature, that is targeted by Modular ability (so it is no longer illegal target, which will make you lose the moved counters).

Sideboard
Welding Jar - great against massive swipes or similar role as Snakeskin Veil described above
Dusk / Dawn - great against decks with a lot of strong creatures, like green ramps etc. Usually you have 1 powerful creature and a few on minions. So you will lose 1 and move it's counters further. Dawn returns all your creature cards from graveyard, cause they have base power = 0.
Darksteel Myr - if you need a place where you can safely store counters to play Fling (opp has many destroys, that make you lose counters on playing Modular ability on illegal target).
Throne of Geth - combines Modular move counters ability with proliferate.
Unbreakable Formation - great saver, additionally giving you counters and vigilance
Contagion Engine - great against token decks. Or even all other creature decks - it will just put counters and keep buffing your creatures and destroying opponent's. It is just very mana expensive for this deck.