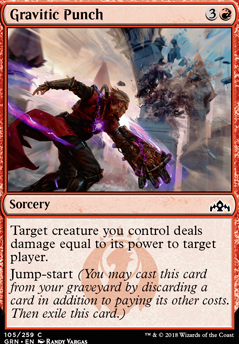 Target creature you control deals damage equal to its power to target player. 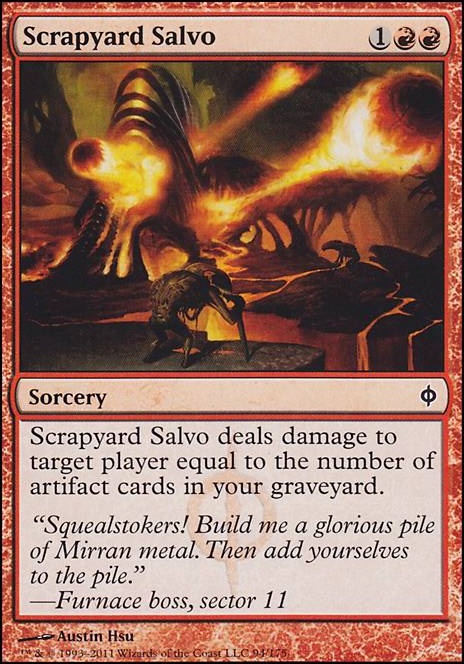 +1 for the neat interaction between Riku and the Ravager! Fun deck concept. I'd like to offer a list of cards that seem appropriate, for your consideration.

Side notes: Calamity Bearer is not the "target" for the sacrifice (this matters because you could still sacrifice it if it had shroud, or protection from red, both of which would prevent it from being targeted by Surtland Flinger).

Surtland Flinger's attack trigger is actually two triggers. When it attacks, the ability triggers with no target, and as the trigger resolves you may choose to sacrifice a creature. If you do, it triggers the second part, which goes on the stack with a target and deals damage when it resolves.

Hey, on a budget well done upgrading the precon. Nice upgrades of Ral with Reverberate/Vengeance for the combo, Settlement/Encampment/Drum, Hippocamp, Brainstorm, Dig, Within, Shift, Passage.

If you like any of these suggestions I offer more advice about what cards to cut. Good luck with deck.

Well, I really was not aware of Chandra's Ignition, in my decklist I go for Gravitic Punch and Fling / Thud, instead. Your list is way more sophisticated than mine, I might have to get some inspiration from your combos. To utilize Mindslaver the way you do is mean at a genius level!

Kogarashi on Obosh, the Preypiercer

Obosh, the Preypiercer looks at the CMC of the source of damage only, which in this case is the target creature (Malignus). Since that CMC is odd, Obosh will replace the damage with double damage.

I guess my question was to the word equal on Gravitic Punch.