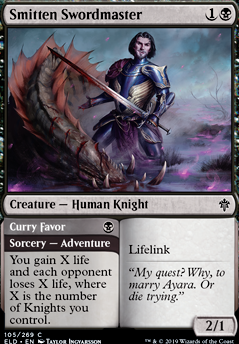 (You may cast Smitten Swordmaster from exile if you sent it on an adventure.)

You gain X life and each opponent loses X life, where X is the number of Knights you control.

(You may cast Curry Favor for from anywhere that you have the permission to cast this, then exile it on an adventure instead of putting it into your graveyard. When you have not chosen to cast Curry Favor, this card is treated only as Smitten Swordmaster in whatever zone it is in.)

(Example scenarios for Curry Favor: You may cast this off of Melek, Izzet Paragon. You may not target this with Snapcaster Mage. Thalia, Guardian of Thraben increases the cost of this. Electrodominance requires X=1. If your opponent owns this and you cast it, only you may cast Smitten Swordmaster when it goes on an adventure. You may cast this from a cascade spell if the spell has a cost greater than Smitten Swordmaster's cost.)

This deck is awesome.

But how about adding some Trample in your deck with Embercleave and Shadowspear?

In addition, why not adding Mirror Shield or Wings of Hubris in sideboard?

Also, I feel like this deck is absolutely not meant to be an aggro deck since the cost of equipment + creatures + enchantments to allow getting off with the deck can be quite high and can be actually easy preys for board wipe cards like Shatter the Sky. So I would take out some cards like Crashing Drawbridge since giving haste is not primordial for your deck in my opinion (or can be in certain condition). Instead, I can suggest you 2 alternatives to it: Smitten Swordmaster for putting pressure , or Unbreakable Formation for survivability (only if you feel that taking out some knights may not negatively affect your overall plan, but hey a wall stays a wal, right?).

I wish I could try this out on arena, but you know; "WILDCARDS".

Good luck with this deck ;)

If I replace Gutterbones with Foulmire Knight, I may reconsider finding a way to put Smitten Swordmaster in the main or in the sideboard to give the deck a bit of reach as itâs already Knight-heavy.

Well, I'm not very good at building aggro decks but I have some suggestions.

Just max out on Tournament Grounds and remove cards like Orzhov Guildgate and Wind-Scarred Crag . Tournament Grounds doesn't come in tapped, which allows you to immediatly play something, and gives you all the colors of your mana base.

Just cut Josu Vess, Lich Knight . Without Kicking it it's just a 4/5 with menace and even if you want to kick it, it's outrageously expensive to do so. Instead, you could use Knight Exemplar as it impacts the board as soon as it comes into play while also being cheaper.

Stormfist Crusader would give you a decent card draw engine, since the deck has no way of drawing cards and you have the risk of running out of gas. I would replace Smitten Swordmaster or Wintermoor Commander .

Hope these are at least of some help.

Hypnotic Sprite is very under-powered. Replace it with more of any of the following: Faeburrow Elder , Smitten Swordmaster , or Acclaimed Contender (this would almost remove blue, which means you can take this down to a four-color build without too much trouble). This actually isn't a horrible build, but you need more interaction. Opt can be replaced by interaction, as can Steelclaw Lance .

Sacred Foundry Is arguably the most important shockland for this list. It'll allow you to cant Fervent Champion or Venerable Knight on turn one whist covering half the colour requirements for both Inspiring Veteran and Stormfist Crusader for turn 2. Red Duel lands are the most important lands in this list because they are the only lands that allow you to empty your hand T1 - T2 and still kill with a T3 Embercleave

And as far as Worthy Knight goes that is more of a card for The Circle of Loyalty 'go-wider' decks, it doesn't enable kills as fast as Stormfist Crusader or the burn that Smitten Swordmaster offers.

Sorin_Markov_1947 I would agree it can be a challenge sometimes to get Stormfist Crusader out on turn 2 and I may change that to Acclaimed Contender however I would disagree on taking Rotting Regisaur out. He is one of the decks win conditions and aside from maybe an Embercleave on a pumped Knight of the Ebon Legion there really isn't that much to close games. Smitten Swordmaster over Venerable Knight is definitely another good win condition, but I will in the long run probably need Rotting Regisaur . I may take it down from 3 copies to 2 or even 1 copy though. Angrath, Captain of Chaos is definitely just a third wheel but that is kinda his point. He's in the deck so that in case i can't get a Rotting Regisaur out i can still go wide with my creatures. Icon of Ancestry may also get the boot in trade for Bonecrusher Giant so that i can get the Shock as well as a 4/3. Thanks for the help though I very much so appreciate it.