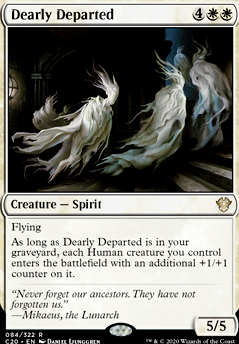 As long as Dearlt Departed is in your graveyard, each human creature you control enters the battlefield with an additional +1/+1 counter on it. 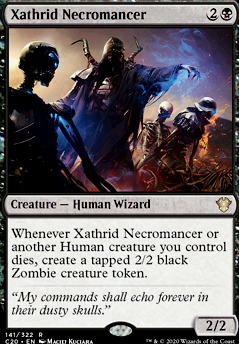 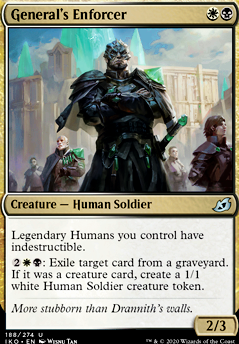 I think that you COULD splash G in exchange for the nonhuman creatures here, those being Angelic Overseer , Dearly Departed and Commander's Authority . In splashing Green, you get access to extremely powerful cards in the form of Tireless Tracker , Harmonize , Dromoka's Command , Hardened Scales , Avacyn's Pilgrim and of course the ever popular, ever relevant Collected Company .

I have a deck similar to this, splashing G to great effect here: Thalia's Horde of Humans.

On the other hand, if you don't want to splash G, Abzan Falconer could be a good finisher.

Holy crap this is awesome! Dearly Departed seems so good in a humans deck! +1!

I did playtest with Alesha for a while, but found that she was a bit slow and not all that useful; I rarely end up putting creatures other than Valor and the Dearly Departed in my graveyard, because the excess discard is usually just lands, which I only need a few of anyway - there usually wasn't anything for her to return from the graveyard.

I also ran Thatcher Revolt in this deck for quite a while, but eventually took it out because it seemed like a bad deal - why pay one mana per token that I have to sacrifice at the end of the turn, when I can pay the same rate with Gather the Townsfolk for tokens that stay on the battlefield (plus the fact that Gather the Townsfolk works better with my curve)?

I do see where you're coming from vis-a-vis the removal, but in my meta Path is very much worthwhile (a few too many Phyrexian Obliterators crawling around, among other things).

The combo is actually with the Dearly Departed as well, not just Valor. The Standard Bearer is definitely not ideal (still pretty upset that zombies got a way better version of this guy), but I've found that despite his relative weakness when compared to his equivalents in some other tribes, he fits pretty well into this deck. I'll keep the Doomsayer in mind, though - he's made into the maybeboard a few times, my only concern is that he's a bit slower than this deck aims to be.

There are a number of cheap, effective red kards Keldon Marauders has fallen out of favour, but is a 2 mana lava axe when it works. Nivmagus Elemental is cheap and provides limited counterspell protection and the oppertunity for combo finishes with Temur Battle Rage. Sin Prodder is dirt cheap and very effective, even without cheap delve.

With super budget the lack of lightning bolt hurts red, and lack of boros charm red white so janky combo is usually the most functional option. Board flooding with Mogg War Marshal, Foundry Street Denizen Dragon Fodder Battle Hymn Dragonrage Akroan Crusader Empty the Warrens, Haze of Rage and so forth to spam out a win. Guttersnipe used to be good but has fallen to more efficient options, leaving him pretty cheap.

Human tribal with Keldon Marauders/Thatcher Revolt/Kessig Malcontents is functional, especially with Gather the Townsfolk and Dearly Departed/Cathartic Reunion. For the non-$10 version there are some very competitive lists out there, but there are a lot of cards in modern that aren't valuable because they just aren't in short supply but are still super good.

Magus of the Will=Master of Puppets

Tana, the Bloodsower seems like an edgy female rocker, along with Alesha, Who Smiles at Death.

Ravos, Soultender seems like he could be a cool personality for a lead singer.

Some cool song names could be Ever After, Extinguish All Hope, Eliminate the Competition, Dread Summons, Dearly Departed, Divergent Transformations, Stalking Vengeance.