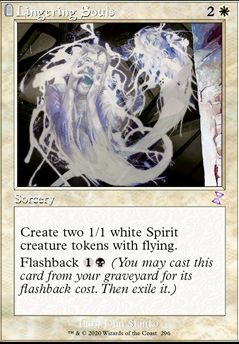 Finally got to play the updated version of this deck at an FNM. We had 10 people sign up for a 4 round night.

Round 1 I played Affinity. Game 1 I discarded his Cranial Plating for him just to draw another one but I had too much removal and efficient blockers and eventually built the board pressure up to win the game. Game 2 I started a little slow but had enough removal to stay in then had a strong mid game but had to make some poor blocks to stay safe and then ran out of gas in the late game after getting my Sorin, Solemn Visitor countered and lost. Game 3 I controlled fairly well throughout and had too much removal and inevitability. Games: 2-1, Matches: 1-0

Round 2 I played Burn and both games he had turn 1 Goblin Guide , but I had my own turn 1 Fatal Push (see my deck list title) to use on his next attack phase. He wasn't quite fast enough as both games he ran me low but didn't have gas fast enough as my incremental life gain put me out of reach as my tokens poked him down. The best part of this match was when he dropped a second Eidolon of the Great Revel and I only had a Spectral Procession and Sorin, Solemn Visitor in hand. Games: 2-0, Matches: 2-0

Round 3 I played a guy running B/W/R control with lots of targeted removal and things like Lingering Souls , Dark Confidant , and Abbot of Keral Keep , and Liliana of the Veil . He had too much single creature removal and I had enough to keep his threats off the board and out-valued him both games, dodging his sided in board wipes in game 2. Best part of this match was when he played Inquisition of Kozilek on my 3 card hand that was 1 Spectral Procession and 2 Gideon, Ally of Zendikar .
Games: 2-0, Matches 3-0

Last round I got the only other undefeated player who was running American (W/U/R) control. He had no main deck creatures other than Snapcaster Mage s and generally finished off opponents with Celestial Colonnade s. He mulliganed to 5 or 4 first game and both games I was able to hand control most of his board wipes and dance around his counters and removal, keeping on solid pressure and out-valuing him too quickly for him to keep up. I felt in control this whole match and at one point I played a Lingering Souls and he said "How am I even supposed to beat that card?", with a complete look of despair on his face (this guy can be a bit annoying, so it was a little sweeter than it usually would be). The best part of these matches was when he had to use 2 Lightning Bolt s from hand to kill my Gideon after already having made a token. Games:2-0, Matches: 4-0

It was fun and exciting to play this deck after a long time and even better to see it do well. The Fatal Push s definitely are a big part of the ability for success with this deck. It was nice as well that all of the opponents I played were solid veteran players, as I sometimes come up against new players with sub-par decks and the wins don't feel quite as earned. Excited to play it again.