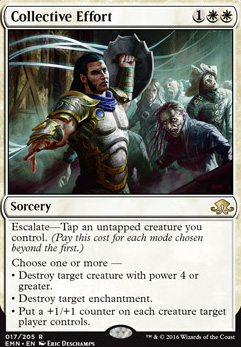 Collective Effort occurrence in decks from the last year Just for some extra options in mono white, I like the cards Collective Effort and Declaration in Stone as strong removal.

things to abuse his tap ability

Nice deck, love aggro Selesnya. Have you considered Collective Effort ? I think your deck can really take advantage of all the modes. Also I think Knotvine Paladin could serve a similar purpose to Shanna, Sisay's Legacy , though not as powerful, it has the benefit of not being legendary. Hope this helps.