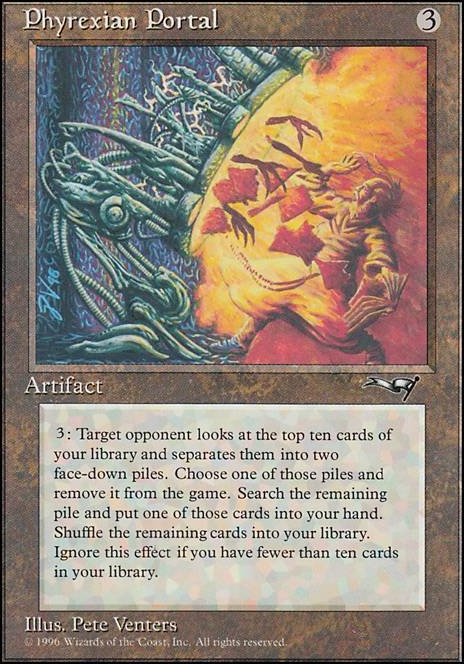 (3): Target opponent looks at the top ten cards of your library and separates them into two face-down piles. Remove one of those piles from the game. Search the other pile for a card and put it into your hand, then shuffle your library. Play this ability only if your library has ten or more cards in it.

Profet93 - As for the rulings of Diaochan , I have checked the rules and asked around. Despite the opponent making the choice, the game still identifies me as the controller of the ability. As such, Hexproof is somehow worse than Shroud.

As for Phyrexian Portal , this is steadily becoming a favourite of mine. This deck can generate a lot of mana really quickly, but does not always have a place to put it. This artifact, breezing all of its rules text, essentially has a three-mana activated ability that draws a card. When I have nothing else to do, what better than to draw cards?

I have wayward deck decisions, but I can draw a lot of cards.

An activated ability I much enjoy abusing is Phyrexian Portal . It essentially draws a card.

Circle of Loyalty in particular seems rather slow and inutile for a non-Knight strategy.

ShaDoWz_6677 thanks for your suggestions, however the concept I came up with is a little bit different. You could see the deck as Yawgmoth commanding an army of phyrexians, using his own personal devices and creations and everything the phyrexians are known for.

Powerstones were a creation from Glacian, not Yawgmoth and The Weakstone and Mightstone were used to keep Phyrexia away from entering Dominaria and more connected to Urza and Mishra's War and later Urza to keep him alive while being stuck inside his eyes, in the rest of the story. Glistening Oil may fit the theme a bit more, since it's what the phyrexians used to spread their corruption and to compleat other creatures into their own.

Phyrexian Portal looks cool flavorwise and would fit the theme but which card should I remove from my deck now?

You will also want the Weakstone and Mightstone since they were used as Urza's eyes. And a Worn Powerstone to represent the lore part of Gate to Phyrexia since a powerstone with the same charge as one in Phyrexia was used to keep the Gate open.

Phyrexian Portal is another card I'd look into.

Mirage Mirror can clone the whole battlefield at once