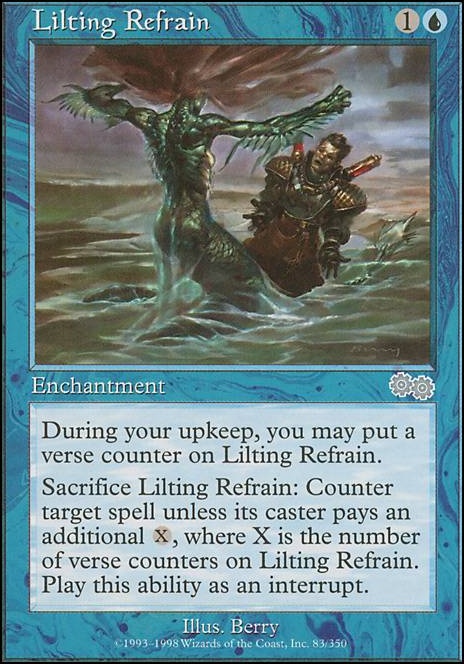 At the beginning of your upkeep, you may put a verse counter on Lilting Refrain.

Alela, Who Pulls the Strings
by BrickSkipper

I love to min-max my deck building.

our playgroup isn't the kind that thinks Mana Crypt s, Force of Will s, and its ilk are auto-includes in all decks.

_However, I feel like the consistent card-draw stapled to her would make the deck too powerful and consistent. _

Estrid, the Masked is too good. There, I said it.

having a tutor in the command zone tends to make the games too consistent and predictable;

The second stipulation is that the deck is tuned for Primal Surge . With only 6 instant and sorceries in the deck including the surge itself, you should (approximately) get about 20 cards off of each Primal Surge. Since 1-card wincons are incredibly uninteresting as far as I'm concerned, I don't think the deck will reach a point where Primal Surge is the only instant or sorcery.

Probably the best card draw in the deck. Perhaps too good.

The amount of mana this card can produce for one mana can become unfair. Perhaps this should only be in cEDH.

I refuse to build 0 instant/sorcery Primal Surge . The idea of making it a 1-card wincon is uneventful to me. I'd much rather have the drama and variance of not knowing how many cards (or which cards) I am going to hit.

I don't think min-maxing means what you think it means. Intentionally not using cards because they are good or not building your deck a certain way because its too reliable for winning is the exact opposite of min-maxing. I will never understand the aversion of new players to winning, but I will review your deck in good faith nonetheless.

First, your land usage is definitely not optimal. You correctly identified the usefulness of fetches and duals for 4 color decks, but you chose not to run them (they are $$$ in real life dollars, so understandable). Regardless, you should prioritize lands that 1. Enter untapped and 2. Give access to the colors you need. A large number of your lands fail this metric.

Second, you run a number of cards that are 1. Expensive to cast and 2. Don't do much for the mana cost. Specifically, I am looking at Sandwurm Convergence Mind's Dilation , and all the Hondens. Sandwurm convergence is an underwhelming effect for a whopping 8 mana, stopping flyers is negligible because most EDH decks are built to win by combo. The 5/5 at your end step is nice, but the two effects combined are not worth the investment of 8 mana. Mind's Dilation is similarly heavy to cast at 7, but is even less worthwhile because it requires your opponents to do something before it does anything for you. You also aren't guaranteed to get value from it, because opponents can hit lands, they can hit spells you can't use (counterspells and removal come to mind). The hondens are bad because they require a heavy investment of mana and cards to start producing anything worthwhile. They also rob you of 4 deck slots that could go towards something more productive for winning. You are never going to get all 4 of the Hondens onto the board in a timely manner because your ramp cards are so low quality and you have almost no card tutors, plus slow and passive draws. Also no, 4 Hondens on turn 10 is not good.

Your interaction is. . . bad. Sunken Field will only work on bad players. Comboing it with untap effects would be interesting, but right now its just a very very very weak and predictable counterspell. You know how you are singing the praises of Telepathy ? You are giving your opponents the same information about your disruption while gaining no extra benefits from having it be in that form. Its also costs you 3 mana to use it the first time (2 to cast, and 1 more from tapping the land it enchants), meanwhile there are a whole host of 2 and 3 mana counterspells that are guaranteed to work. (even Cancel is better) Lilting Refrain is also very bad for very similar reasons. On top of telegraphing your play, it also can't counter a spell until a turn after you play it. It most likely won't be able to counter a spell until two or three turns after you play it. If you ran some recursion effects or proliferate effects, it might be salvageable, but currently its just really bad. Declaration of Naught is pretty bad too, its reusable against commanders, but its also costing you to counter one spell. Your only hand peek is Telepathy , and you run no blink effects to reset Declaration to abuse it.

I'm very confused by your Primal Surge choices. Designing your deck around Primal Surge working to not its full potential is just astonishing. Why even include it at all? Especially since you can actually lose from casting it, due to the nature of many enchantress effects that do not specify the word may for those draws. Casting a 10 mana spell should guarantee you are going to win, but it doesn't in this deck.

I feel similarly about Hive Mind . The potential for this card blowing up in your face is so high. Ideally, you pair this card with instants and sorceries that your opponents wouldn't want to cast at all. I understand you run a small instant/sorcery count, but that once again means you're relying on an opponent to help you get to your own win, otherwise you just wasted 6 mana on a card that does nothing with the other 98 cards you put in the deck. This card is never going to benefit you when you are ahead, it just means any piece of removal played becomes 3 pieces of removal against your board state.

Any cards you run with the words "gain life" on them should go. Also, how does this deck even win? Creature swings? Honden of Infinite Rage and the other Hondens then take 30 turns? Sandwurm Convergence then take 10 turns? Cast Primal Surge for half your deck then pass?

If you're looking to get away from the Flickerform effects and use a Glen Elendra Archmage, Solemnity might be something to look into. It's kind of controlling and negates poison counters, but doesn't work with Avenger of Zendikar, Lumberknot, Lilting Refrain, etc... and as I'm looking at your deck I see Solemnity already in there :P Nevermind haha

It will not receive a counter.

Lilting Refrain's first ability has received some errata and currently reads: At the beginning of your upkeep, you may put a verse counter on Lilting Refrain.

Because Lilting Refrain is not on the battlefield when "beginning of your upkeep" abilities trigger, its ability will not be put on the stack, and it will not receive a counter.