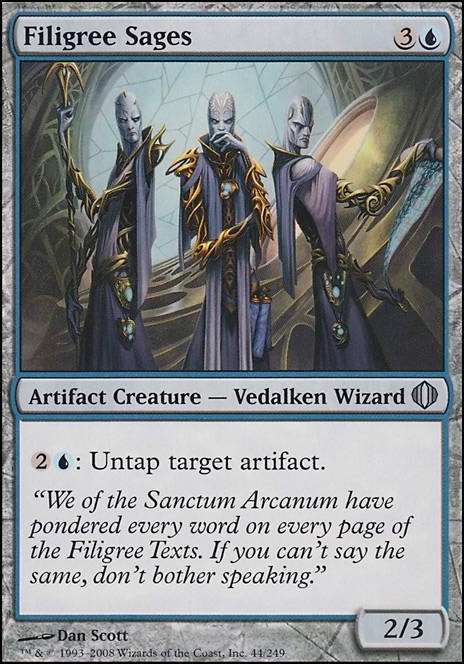 If you don't mind infinite combos, Pili-Pala is a classic companion of Grand Architect that nets as much mana as you need. Toss back in the Filigree Sages or something to that effect and you can activate all of your artifacts repeatedly until the job is done. Codex Shredder , Unwinding Clock , and Vantress Gargoyle are some other cards that might fit this strategy. There's also the idea to focus on playing many small artifacts for Altar of the Brood and Grinding Station .

If you're running Aphetto Alchemist and want to get a Paradox Engine -esque effect, you could try to include Illusionist's Bracers . It will give you infinite artifact untaps of your mana rocks. Also consider maybe swapping out one of your lands for Prismatic Vista , since it's a great fetch card that can help fix any of your mana needs.

Maybe then you could consider cutting Filigree Sages and Foundry Inspector ?

So this is what it would look like if I just gave up on the equipment side focus. Otherwise the new maybeboard would take the places of Crystalline Crawler, Thran Dynamo, Filigree Sages, and Planar Bridge. I really liked the equipment idea, but I think it was hindering the main focus of the deck. I know I didnât cover everything mentioned in the comments, but itâs at least a step forward. Thoughts?

Bchong, the deck normally ramps rather well, actually. Itâs around the same speed as the decks I play against. I can usually get everything I need in time, and Iâm pretty good at keeping the stax enough in my favor to work. Seedborn Muse and Tidal Force really help with that. So casting my big cards arenât usually a problem.

But like I said, I was hoping to keep it a little equipment based, thatâs why I have cards like Nazahn, Revered Bladesmith and Sigarda's Aid in it. But I see your point that the second may be unnecessary.

Also, yes, I meant to make all the basic lands snow covered. I just forgot to do it on the website.

Youâre probably right that I donât have enough benefits for infinite mana. I meant to try adding Nylea, God of the Hunt as well as a combo with Filigree Sages and Planar Bridge, but kept putting it off. I also have an infinite combo that I took out a while ago, but may put back in.

Thanks for the insight, I really appreciate it! Iâll see what changes I can make and post them soon.

Kruphix - Something wicked this way comes

dhynes1 I actually do have one! And I already have Dramatic Reversal in the deck. I can do the one that you suggested, or I can just have Filigree Sages out with Astral Cornucopia out with at least 4 counters on it. That is the less likely one, but still another possibility.

Infinite Reflection doesn't go infinite with any of the indicated cards as far as I can tell (doesn't affect tokens).

Wake Thrasher gets infinite power with Tidewater Minion and Aphetto Alchemist, (while all the cards are listed, the combo isn't)

Vorel of the Simic

first of all i really like the deck and the monstrosities it produces. i personally play EDH casually with a group of friends and therefore is everything i know based on my experiences there. my very first deck i ever built was Varolz, the Scar-Striped and it did similar things with all sorts of hydra's and counter doublers. this deck never won. the reason was that i needed several turns to get out a big dude, only to have it struck by Anguished Unmaking. for these kinds of decks you need explosive turns where once you're set up, you can keep going each turn untill your opponents are trampled over. the first thing that came to my mind was Everflowing Chalice or Gyre Sage. combined with Sword of the Paruns a gyre sage that taps for 4 green mana becomes an infinite mana source. Mistcutter Hydra could now be a hasty 10000/10000 coming at your unsuspecting opponents. Gemstone Array is really usefull when you are producing immense amounts of mana, for you can use it as a converter to make UG for vorel.

untappers you can use multiple times in a turn if you have the mana: Filigree Sages, Thassa's Ire, Sword of the Paruns

i'm just mentioning things that i think need to be replaced, if a card is not mentioned, it can stay imo.

Clever Impersonator and Progenitor Mimic. copy effects dont copy counters on a card (as written in rule 706.2) so they have no real value in the current deck and should be replaced.

Trinket Mage: are Sol Ring / Sensei's Divining Top important enough to have this card in your deck? i think not. (remember, opinions)

Master Biomancer: currently you have no effective ways of adding power to your creatures that do not generate +1/+1 counters by themself. therefore you should either remove Master Biomancer or add cards like Death's Presence.

Lorescale Coatl, since your carddraw is limited this card is too slow.

Oran-Rief Hydra i smell something of a mini landfall subtheme in the deck as it is, however this isnt what you currently are trying to do so that makes this card way too slow.

Sapphire Drake: an alternative would be the outlast creatures e.g. Tuskguard Captain its way cheaper and does the job. alternatively you could run them both.

Sphinx of the Final Word: are your instants and sorceries the things you win your games with? i think the answer would be: no, my creatures are going to win the game for me. therefore i would replace this card with Archetype of Endurance if protecting is what you want to do.

Young Wolf: loses its undying ability if a counter is placed upon it before it dies. replace with Servant of the Scale

lastly, 37 lands is fine, but the amount of ramp is not. Nature's Lore and Chromatic Lantern are the only cards that make sure you have your lands. you have green, so add cards like Cultivate, Kodama's Reach, Rampant Growth, Explosive Vegetation. also a Simic Signet is nice to have.

this deck can go anywhere and i had lots of fun trying to figure out a path to playing fun games, i realise that i have been rambling on and on so i would really appreciate your opinion on the matter.