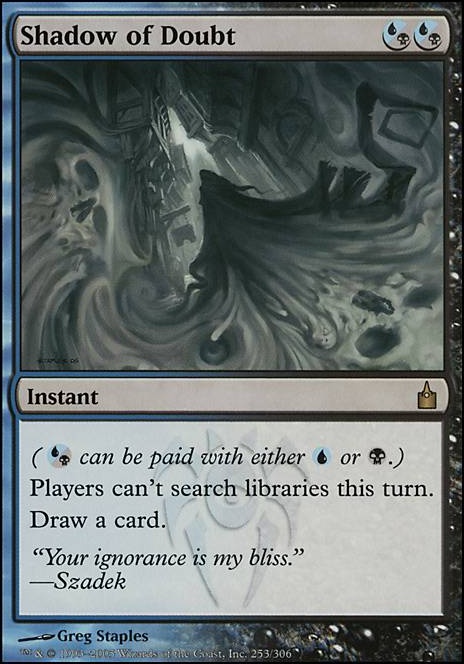 Shadow of Doubt occurrence in decks from the last year

A Harmless Pact
by Naksu

King of the Pirates, First Fleet

Yo sam171z, so I took a quick take on your decklist. In the general sense, how competitive/tuned do you want your list to go to?

Like in all deck building, what theme do you want to go for and how much of a budget are you willing to spend to get the results? For Grixis decks they rely essentially on a lot of rocks to get you to accelerate faster.

Here are some cards that I use that are staples in competitive deck building in Grixis colors. Feel free to ask for more specifics on how ya wanna deck build, huge advocate on helping people tune their list to their own sense of style on what you want to do.

Some cards that are tribal-esque:

In regards to your question on how I would build the deck, hmm I would probably go more towards a control/steal theme with maybe a small bit of reanimator package. There is quite a bit of things you can do, there are some combos you can run that would mesh well with the pirate theme. Like both Dockside Extortionist and Cloudstone Curio can net you infinite mana (provided your opponents have enough artifacts/enchantments to negate the cost of recasting) or you can do some synergies with Glint-Horn Buccaneer and Curiosity combo which can be fun. But that's how I would build it, feel free to ask if ya have any more questions~

Finally had some time to give some insight!

Here is a list of possible cards that you can use depending on the route/direction you want it to go for!

Feel free to ask about any card choices! There is probably more cards but I can't think of any off the top of my head haha

I Caught the Modern BUG

That's a whole lot of Tectonic Edge in a deck that wants to cast Vendilion Clique , Abrupt Decay , Liliana of the Veil , and Shadow of Doubt . Not to mention I'm pretty sure Ghost Quarter or Field of Ruin both outperform Tec Edge most of the time.

Sweet! Gracias, I'll tell you the reasoning I originally had behind strip mine, shadow of doubt, and capsize. Then I'll remove em and test your suggestions

Exploration + Life from the Loam and Strip Mine are their own win conditions. This combo sees regular play in Vintage. But I only was able to pull this off once, so yeah a mana vault would def help with the Razaketh way of infinite mana instead

Shadow of Doubt is admittedly meta dependent. The floor of this card is that it's a flexible, instant cantrip for 2. Hitting fetches is okay,the reason I put it in was to hitting Protean Hulk , Gamble , Pattern of Rebirth . Even if its in my graveyard, someone will give it back to me to use with tasigur when an opponant tutors. I just haven't had it in hand or graveyard yet lol. Maybe people dont play enough of them to warrant it

Capsize is literally another wincon with infinite mana. That said, I think I already took it out for something I forgot of, maybe Ensnaring Bridge . So you're right on the money there. Will try out exsanguinate instead before next week

If I were to replace 3 cards from your maybeboard, I think I would throw in Mana Vault , Sylvan Library , and Exsanguinate .

I would swap Mana Vault for Strip Mine . It may not be a clear cut decision like I'm going to make it sound, but I can only think of 4 Land cards to target with the Strip Mine . The two that we've encountered the most are Glacial Chasm and Cabal Coffers , leaving Maze of Ith and Gaea's Cradle for the other two targets. In all of the games that we've played, seldom have you activated Strip Mine to blow anyone's land up. That being said, its main utility is kind of irrelevant. One colorless mana is still one colorless mana, so there's that, but I honestly don't think you'll miss it too much. One more thing that I could say to advocate for Strip Mine are the times (which are more frequent than any of the land cards listed above) when a useful value/combo piece is shut down by Imprisoned in the Moon . This is a pretty cheeky way to get it back without a Naturalize or similar card, due to Tassigur's recursive nature. The last thought is if you were to run Strip Mine , get ready to run a Scaretiller to get it really running and to help thin your graveyard.

Sylvan Library is maybe more important than the Mana Vault . Ramp is valuable, but card advantage is invaluable. You can preview your first Tassigur interaction for that rotation, and maybe it makes sense to reorder your top two cards if you have a draw spell to either force a land into the graveyard, or grab one so you don't miss a drop. I haven't encountered a game where Shadow of Doubt has made an impact, but I think that is a similar casting cost card with a much less desirable or lasting effect. Shadow of Doubt has that sweet fetch land swat if you want to put someone behind.

Lastly, Exsanguinate needs to be in here as an alternative wincon. Recently, we played a game where you had the ability to make infinite mana, but not an effective means to use it other than Tassigur activations, and due to the board state, that wasn't exactly desirable. Exsanguinate is less flashy, but just as an effective means to close out a game. Maybe get rid of Ob Nixilis's Cruelty or Capsize to make room. You'll basically be running two of them if you can Muddle the Mixture and grab it.

I love the inclusion of Blackmail for 8-Rack. It's so much better than Thoughtseize in the late game.

I've personally never found the need to run all 4 copies of Raven's Crime . Maybe swap one for a copy of Syphon Life or look at a few copies of Funeral Charm (instant speed discard is great when you get them into top-deck mode).

I've been playing around with whether Defile is better than Fatal Push and/or Dismember , especially in mono-black.

I'm wondering if Force of Despair may be a good inclusion, even as a sideboard card. It seems like it would be good against fast decks like Affinity.

My big quandary right now is whether it's worth tossing snow-lands in to run some copies of Dead of Winter to clear the board.

Finally, I'm personally a big fan of Shadow of Doubt , even as a sideboard card.

Let me draw some extra cards

Kaya's Guile seems a little too expensive for what it does. The only interesting mode is gain 4 life, which I don't like paying 3 mana for. As for negate, I play Dovin's Veto instead. Better in the mirror, and since I only play one, I don't get problems with not being able to cast it.

Narset is a strong card, just not for the main deck. Is only good against pheonix and the mirror, so I'll keep it in the sideboard. After some more testing, I might consider another copy.

As for the rest of the cards, they all have their purposes. Torrential Gearhulk is just instead of another snapcaster, the 3-1 split with snapcaster has worked good so far. Fatal Push is better than path, since it's way better early on, and latter on when you need path more, you'll have been through enough cards to probably find path. Shadow of Doubt is something that I'm considering to cut. Is quite nice against tron, and works well with path, but doesn't do much else. Maybe I'll play more Opt s over it.

I just recently moved from UW to Esper, so I can play spellbomb, so i'm still trying to work things out. Therefore, i appreciate as much feedback as i can get.

That sounds like a perfect Ashiok play! I've been considering putting him in my Tasigur deck because Shadow of Doubt has been great in a lot of situations, but that's partly because it's an instant and I don't run enough creatures to block for Ashiok if people swing in. I haven't finished the decklist on here yet but I just put up a video on it if you want to check it out: it's similar to yours but it looks like you go more in on the reanimation: I'd be interested to hear your thoughts. https://www.youtube.com/watch?v=p0uCqC2a6n4