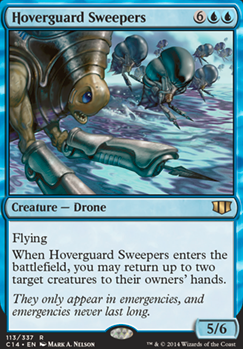 When Hoverguard Sweepers enters the battlefield, you may return up to two target creatures to their owners' hands.

I really should try out the Brutalizer Exarch. I know that you've complimented it before, and I can't really think of anything else I would rather use to replace Hoverguard Sweepers.

I basically consider Scryb Ranger a mana dork that in some cases even refunds you the mana you spent to cast it the turn it comes into play. On any turn you don't have an additional land drop, you can just bounce a Tropical Island or Taiga to your hand and replay it for what essentially counts as a free mana that turn. It's something that I found increasingly relevant as I slowly shaved away at my land count. If you have a mana dork out, then the Ranger helps to generate even more mana. And of course, it pairs very nicely with Bloom Tender and Kiki.

Random things I've used the Ranger for include: Flashing in and saving a Tropical Island from being Strip Mined, catching people off guard by pumping Animar up at instant speed, and providing a surprise blocker when a pumped up Zur with infect was swung at me. It's kind of surprising how often that Protection from Blue can come in handy, and people sometimes don't even notice the ability when reading the card.

But yes, there are situational aspects to how useful the card is. All I can say is that it has worked out pretty well for me. I guess I'd rate it in the same category as cards like Phantasmal Image. They are both cheap utility creatures that aren't essential to the deck and are somewhat situational in their power level, but they've pulled me out of tight spots on at least a semi-regular basis and have been beneficial to the deck in squeaking out extra mana that was needed while attempting to storm off.

@ToffMcSoft So just to summarize some of the key points that JMCraig covers above and has discussed with me in the past regarding playing Animar:

1) You want to maximize your chances of being able to cast Animar on turn 2.

2) Ancestral Statue is such a ridiculous card in Animar that your #1 game plan should always be to focus on getting it.

3) Animar isn't a ramp deck, it's more of a storm style combo deck. Animar functions better with a lot of small creatures than with larger ones.

4) Cheap creatures that net you mana in a way that either makes them free when you cast them or can possibly net you an increase in mana (like Cloud of Faeries and Tinder Wall) are premium cards in Animar, with some being better than others.

5) Animar is an aggressive deck that tries to hit its combos as quickly as possible. Holding up mana to respond to opponents is wasting mana that should be put into progressing your board. That's why the only counterspells worth playing are the once that let you cast them for free, and why Animar tries to run cheap creatures that double as pieces of interaction.

6) The big creatures in the deck should all be a part of a combo or get you to a combo. Big utility creatures that stall out the game aren't as efficient options as cards that make getting your combo pieces easier.

7) As you tinker with your deck to improve consistency and speed up the average turn that you are able to combo off, you'll find that the colored mana requirements for combos like Deadeye Navigator + Palinchron starts to feel restrictive and awkward. (It's the same with the Hoverguard Sweepers combo line too. JMCraig and I discuss it a little further up in the comments.) If your Animar deck is comboing off on turn 6 on average you won't notice it as much, but when you get the deck down to averaging a turn 4-5 win you will definitely start to feel how the heavy dependence on having a bunch of blue mana will start to hold you back.

There are other points too, but those ones are a good framework to start with.

As a side note; I don't necessarily follow this advice as strictly as JMCraig does, and my deck is certainly the less efficient version due to that (I still run Kiki combo). I have some slightly different expectations of how I want my deck to play so I build my deck in a bit of a different direction. But if you are looking for better tournament results, JMCraig's advice is what you want to follow. Every time I decide that I don't like something in my deck, the most efficient replacements always end up making my deck look a little more like the one listed above. I'd love for future cards to open things up for Animar and offer a couple of different viable builds, but for the time being it's best to just focus on the Ancestral Statue line of play in cEDH metas.

I don't see the untappers as dead cards on their own, I like the options and responses they offer, but if you are running them without Kiki then you are choosing them over having more redundancy, which is probably not the right call for the sake of optimization. I have no intention of arguing that mine is the most optimized build, because it isn't. My list is a worksheet of what I have in paper, so there are a number of cards that I would like in there that I don't have (like Sylvan Tutor). I just like the versatility and some of the surprise factor that my list offers because I tend to get bored of decks that are too linear in their game plan. My list still goldfishes consistent turn 4-5 wins, and the Kiki combo sometimes offers me my fastest wins. For example:

Turn 1) Land + mana elf. Turn 2) Cast Lotus Cobra, then drop and crack a fetchland to net 2 mana off the Cobra + 1 off the land to cast Pestermite. Turn 3) Drop and crack another fetchland for 3 red mana and cast Kiki to combo.

It's a pretty specific selection of cards, but I've pulled it off a couple of times. There was at least one other turn 3 combination that I pulled off, but I think Lotus Cobra was crucial to that one as well.

As for the Pod, I often find myself using it in the process of storming off (I usually have a ton of mana and just need a way to get a key creature out of my deck) or as an enabler if Animar is out of commission (damn you Gilded Drake). I don't think "clunky" is the word I would use to describe it, because it has generally worked itself smoothly into the lines of plays I've made, but if you were to say "potentially slow to get it into play" I'd agree. Once it's in play though, I generally have few complaints. I've had less issues with it that I have with Chord of Calling at any rate. I really want to replace that one with Sylvan Tutor.

Hoverguard Sweepers is another card I'm having issues with, and I can see why you eventually took it out. It offers a strong line of play, but it can take an amount of setup that I often find to be awkward to manage. The only reason it is still in my list is because without it I feel that Fierce Empath loses a good portion of its payoff. If I take out the Hoverguard, I want it to be replaced by a 6-7CMC creature that offers strong utility towards ending the game (I wish Animar had an effective way of utilizing Protean Hulk). I've considered the Brutalizer Exarch that you run, but I'm not convinced that it is the card that I am looking for. Bane of Progress is a possible meta-dependent option for the slot, but I don't think that's what I want for a generalized list.

There's a lot that I want the new Dominaria set to give us for Animar, so I sure hope that Wizards is listening! Cheap utility creatures and one or two on-color 6-7 mana competitive bombs please!

What multiplayer lines do you look for with Animar, then, now that you have removed Hoverguard Sweepers? I definitely like the inclusion of Siren Stormtamer, but I'm still holding on to the Sweepers line. It works really well for finishing off the table when you find Imperial Recruiter, then can end the game. But if there was another good line other than getting Purphoros, God of the Forge and Ancestral Statue, then I'd probably remove Hoverguard, too, since it is very mana intensive.

I saw your list no longer has Hoverguard Sweepers in it. Any reason for the removal?

I like sphinx. Prognostic Sphinx is an alright cards in budget commander.

Those are decent creatures, I hope that helps.

@Austin_Smith_of_Cards: Thanks for the suggestions! All good ones too! I think I have to pass on Stunt Double if only because I'm slightly over $40 as it is and I'm really trying to keep it at that limit. I'll change out Distorting Wake and Hoverguard Sweepers for the other two.