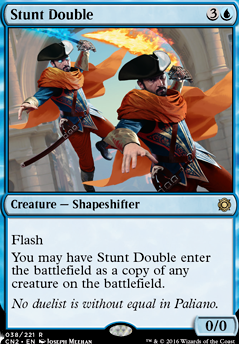 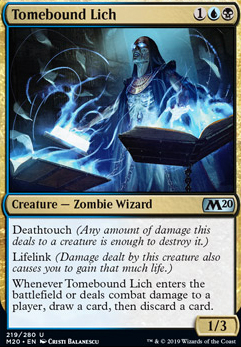 pskinn01, that makes sense, and would explain the inclusion of Blightsteel Colossus, which has no apparent connection to the theme of the set, but I still think that Mitotic Slime, Stunt Double, or Splinter Twin would all be suitable choices for this set.

cool deck!
some thoughts, i would look at Stunt Double over Clone,
Turnabout over Sleep,
and maybe Pull from Tomorrow over Stroke of Genius.
also, this one is personal preference, but Impulse over Peer Through Depths as you can get the other 68% of your deck and don't have to reveal...
cheers and keep having fun!!!

By the way, I felt that with the current version of my deck it was pretty optimized so I tried experimenting a bit with the deck and I gotta say:

I think Stunt Double is an underrated pick, even if it's at 4 mana. I think the ability to copy your opponents' best creature (like my usual target of Tymna), or even protect Animar from Gilded Drake.

I just wanna know what you think of it. It may be clunky but it has potential as well