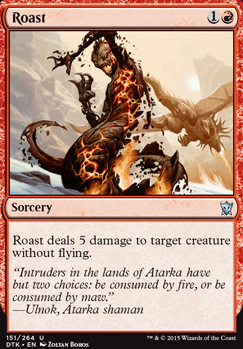 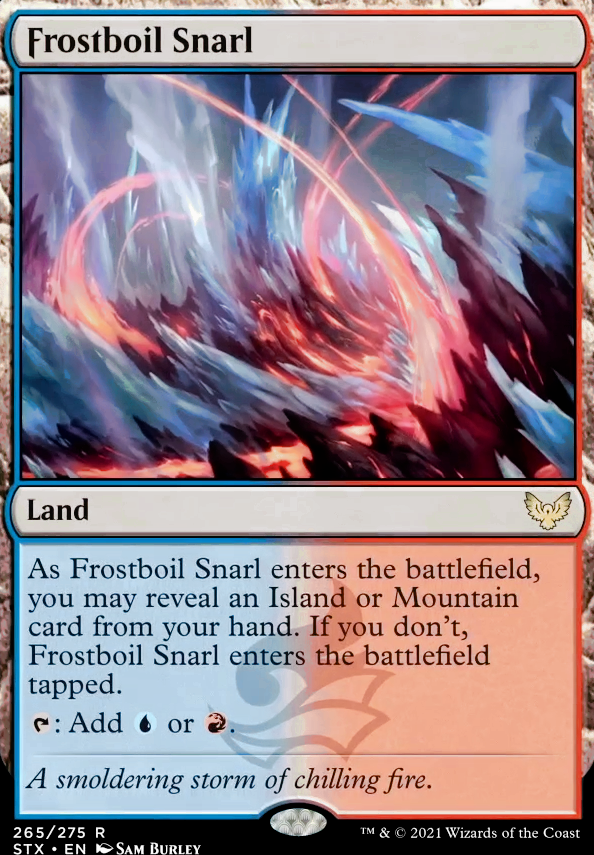 Harvest Pyre might be worth a slot in this deck. It can either just be a Roast with downside when you don't have a route to win or it can be a win-con if your nahiri's wrath didn't do it.

If I have Lightning Helix with Soulfire Grand Master in play, I'll gain 6 health from a single Lightning Helix as well as deal 3 damage. If I use it with Firesong and Sunspeaker I'll gain 6 health, and do 9 damage. I like the lifegain aspect of it, as 6 is a ton of life, and will basically buy me time to get to what cards I need. Rollick of Abandon is not only useful with Blazing Volley but also The Akroan War . Do you know of any Jeskai cards that deal +P/-T to all creatures or just the opponent's creatures? Because I've looked through the cards and the only one that does this is Rollick of Abandon . I'll cut the sword and jeskai charm, as you have made good points about those. Roast seems good, although it only targets creatures. I'm not afraid of any creatures fighting me, as I have plenty of ways to get rid of them. The reason I chose Lightning Helix is not only because it is somewhat good on damage, but also has lifegain, and on top of that can target whatever. But Shock to me seems utterly pointless. I think I'll get rid of Blazing Volley because my intention was to use it aagainst a large amount of 1/1's but I realized that my opponent will probably buff them immediately so that Blazing Volley will be useless unless I cast Rollick of Abandon . And it's kinda funny because the meter says it's 78% competitive. Is this meter a good indicator of such?

Lightning Helix is not actually Modern legal. That is a site database error.

Izzet Charm is a card that reads "always does something, but that something is almost always outclassed by other cards". You only ever want it when you know you want to kill x/2s, counter noncreature spells, AND dig through your deck. And honestly, it's what you want here.

Sword of the Animist is just not good in this deck. It's great in commander, but not here.

Rollick and Blazing Volley are not good in Pioneer. There are far better cards.

My recommendations right now are cut Sword, Jeskai Charm, Helix, Rollick and Volley for Shock and Roast . This deck rely lends itself to having a lot of damage based removal.

Also, you need to have a couple specific, compact combos.

Honestly, I can't think of a way to make the combos good. Like, everything is going to be a four card combo that's easily disrupted and takes tons of time and mana to get to.

So I think beyond those changes and maybe some sideboard work, the deck is pretty much done, and by that I mean you can have fun with it, but remember that 'competitive' isn't even on the table for it. It just won't win much outside of jamming with friends.

There is the 'surprise, I'm now value/grind' Soulfire Grand Master / Lightning Helix control list, where you sit with a Negate until the end of their turn then bolt them, while in most configurations you are just trying to hit them with prowess and negate their spells.

Finally there is the 'unfair combo' that does things like like cast Reforge the Soul or Knowledge Pool to lock your opponent out of the game in concert with a plainswalker, or jank out a win with Mystic Sanctuary / Time Warp / soulfire grandmaster.

In specifics; Deflecting palm is fantastic, but most of the time I want it in the sideboard to fight other aggressive decks. Pariah while cool rarely performs well outside combo lists, and even there is competing with more powerful options. Pacifism is usually outperformed by true removal- a few of the variants have deck-specific purposes, but unless you desperately want creatures on the field for Stuffy Doll / Blasphemous Act , its worth cutting for Roast / Negate / Mana Leak / Remand / Path to Exile / Condemn etc. Play to your gameplan.