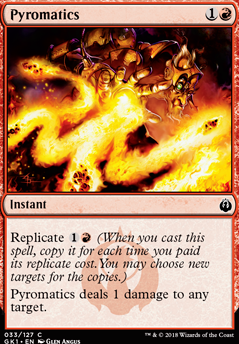 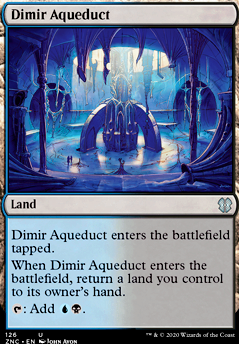 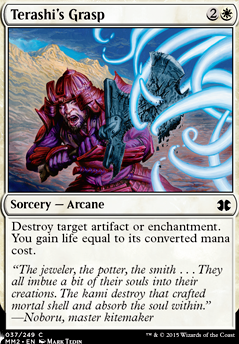 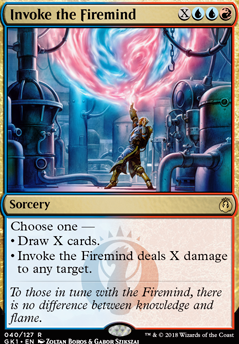 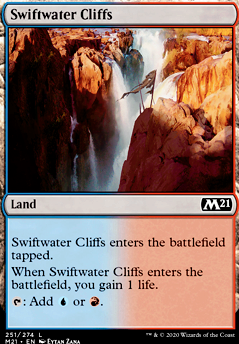 Nevermind. I see that you have things like Pyromatics and Scattershot. Did you just not include Grapeshot because it's too good?

Oooh, this is a neat way to abuse the Firefox, I'm definitely going to use this idea somewhere. One card that I'm excited to use Zirda with is Merchant of the Vale though I'm not sure it fits into your deck. A small nitpick from me is that Banefire although almighty and uncounterable, is in fact counterable with cards like Remand and Unsubstantiate a way to get around this being Pyromatics. Just a little nit pick.

If you wouldn't mind could you elaborate on the use of Ral, Izzet Viceroy? It seems a bit lackluster to me.

+1 from me! Continue brewing the Firefox!

Pyromatics seems like an ideal inclusion, dealing 3 damage for every two mana you put into it. Flame Jab likewise turns every unneeded land in the late game into a Lightning Bolt.

King Beneath the Mountain

Pyromatics is basically perfect with Torbran, serving as as many Searing Spears as you can afford to pay for. Kyren Negotiations lets any of your creatures throw around a bolt at will, helping them to get damage through if your opponent is set up in the late game.

I will say this now, but the combo is entirely too weak on it's own to go with the Splinter Twin style protect combo plan, you also don't exactly have access to a tutor for architect, maybe you want to go with a mono blue creature aggro style deck or affinity blue style deck, now in either case I would say you probably want to cut into your budget for Walking Ballista in any strategy, or at least something more like a Banefire over the Pyromatics it is at least stronger vs Flusterstorm while only be weaker to Narset's Reversal (which is a lot more fringe in modern than the storm).

though yeah you could run creatures like Cursecatcher and Judge's Familiar with many other rather sweet 1-2 cmc blue creatures to really use architect, many which fly, draw you cards, or scry.

Boros Charm - saves your guys from board wipes or damage/destroy removal, can go to an opponents face for 4 damage for a random kill at instant speed, and is the nuts with Gishath because it makes him even harder to block, triggers his ability twice even through a blocker or two, and makes a commander damage kill easier.

Walking Ballista/Triskelion - amazing with all the enrage creatures, particularly Bellowing Aegisaur, which let's you put 5 Â±1/Â±1 counters on each creature you control each turn (or just put infinite counters on everything if you happen to make Aegisaur indestructible somehow...)

Tooth and Nail - just a great card, can search for whatever two guys you need and can get both parts of a combo right away.

Xenagos, God of Revels - amazing in a deck with this many big creatures. Makes a Gishath commander damage kill easier but also is just great with big dinosaurs. Also it's big and hard to kill if you turn it into a creature.

Fires of Yavimaya - another great card with Gishath and the rest of your deck. Giving a bunch of giant Dino's haste is awesome and the +2/+2 is very relevant, digging 2 cards deeper with Gishath, protecting one of your guys from damage based removal or a close combat situation, or letting you trigger enrage 2 more times. Also works well with double strike and Xenagos's +X/+X.

Earthquake, Magmaquake, Pyromatics, etc. - works great with enrage, let's you wipe the board but not necessarily kill all of your creatures. Not as unconditional as [Blasphemous Act], but more flexible depending on the version.

Relic of Progenitus, Rest in Peace, Scavenging Ooze etc. - graveyard hate is almost necessary in most games and groups, not that fun but can win the game or at least give you time against graveyard decks.

Just some ideas, no clue what to cut though. Hope this helps!