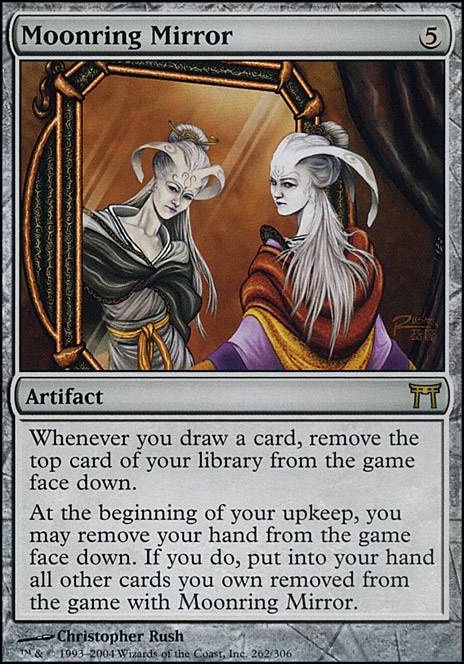 Whenever you draw a card, remove the top card of your library from the game face down.

I completely understand style over synergy. In each of my decks, I have a single, immutable slot betaken to a selcouth or wacky card.

You may have noticed in my Illuna list that there is a single Temporal Aperture, which has been surprisingly good on occasion, despite being against most of the deck's entire strategy. (It gave me a Jin-Gitaxias once.) I also have a Moonring Mirror in Kumena, a Stillmoon Cavalier in Tymna

, a Cao Cao in Chainer

, and more that needn't be mentioned.

Having Questing Beast as a pet card holds far more power than others, so follow what you enjoy.

Monomanamaniac on Question about resolving effects of â¦

If I have a Moonring Mirror in play and I let it build up for a couple turns, then I cast Bottled Cloister. On my opponent's turn I exile my hand. On my turn I resolve both artifacts in order of the mirror on top of the bottle. Can I exile my non-existent hand to get all the cards removed by the mirror, and then put the cards exiled by the bottle into my hand?

Lol by types of hugs, I just meant like different types of ways to group hug, like making everyone draw cards, or giving everyone tokens, etc.

And by unfocused, I just mean that there's not really a clear synergy or a way for you to use the group hugging to your benefit. For example, if you want to group hug by way of giving opponents creatures and buffing up creatures, then you can capitalize on that by playing a lot of pillow fort (the type that protects you without protecting your opponents).

I think that example makes sense, but since your commander cares about drawing cards and helping more lands enter, maybe capitalizing on when opponents/you draw cards and when lands enter would be the best direction. So I was thinking like Consecrated Sphinx, Mind's Eye, and Psychic Possession to get an advantage from helping everyone draw cards, Lifegift and Shattered Angel to get an advantage from helping everyone draw extra cards, and Ankh of Mishra, Tectonic Instability, and Zo-Zu the Punisher to punish opponents for getting extra lands even though I wouldn't run punishing cards in a deck like this.

I do notice a few cards related to triggering when you draw cards, and I think those are fantastic. Three other ones are Horizon Chimera, Moonring Mirror, and Niv-Mizzet, the Firemind.

If you want to abuse those cards, I could suggest a subtheme of wheels, but those arent really group hug cards.

Rhadamanthus on Can I bounce Moonring Mirror â¦

The reason the trigger can still retrieve the exiled cards in this situation is because it's an ability of the specific Moonring Mirror that put them there. When a card uses its own name in the text of an ability, it means "this object, right here". If the game needs to know something about an object that has gone missing from the zone it was expected to be in, it will use the last-known-information for the object. In your example, the game knows that the cards in exile and the resolving triggered ability are both associated with the same Moonring Mirror.

Aethos on Can I bounce Moonring Mirror â¦

That would be nice :D

What I was worried about, is that after Boomerang resolves, the cards exiled by Moonring Mirror wouldn't be retrievable for the triggered ability. I don't quite understand the rules pertaining the tether between exiled cards and their reference.