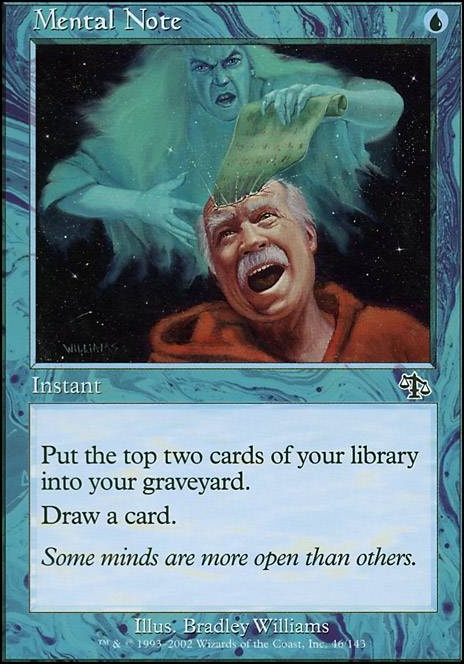 Put the top two cards of your library into your graveyard. U/B The Show Must Go On
by Astor

Circular Logic is going to be bad if you don't play any discard effects. That being said, I can hardly imagine a Canadian Thresh deck without Wild Mongrel. This card will fix a lot of the issues you are having with your deck (cards in graveyard, aggressive strategies, countermagic, etc.).

Mental Note is also a staple of the archetype that is notably missing from your list. Any reason why? Combined with Thought Scour and Brainstorm, you have a pretty effective draw package for your strategy.

I think 10 counters is a bit too many. Spell Pierce seems the narrowest of the bunch and could be a sideboard card instead. Bounce spells work well for a tempo deck. Vapor Snag makes a lot of sense here. It also makes a Red splash questionable, in my opinion. You might not need Lightning Bolts, Fire and Archer in your deck if there are suitable U/G substitutes.

Cutting Red would simplify your mana base drastically by cutting Mountains and Evolving Wilds. Playing Thornwood Falls would make your mana much more flexible and allow your to play more colour-heavy cards.

If you want to keep your Red removal, that's fine. I would definitely find room for Mental Note and Wild Mongrel, though. You could probably trim on Spell Pierce, Ponder, Fire/Ice or Firebrand Archer to make it fit, in my opinion.

I hope that was helpful.

I think adding Mental Note is pretty much a shoe-in but I'm not sure if I want to go as deep as Serum Visions, Sleight of Hand, etc.

I don't see how this is any budget, maybe explain what budget level your goal is? as for your choice in cantrips and card advantage a lot of yours are rather high cmc Thought Scour and Mental Note both are pretty good for tasigur, he also really like Training Grounds and Biomancer's Familiar to make himself a pretty good mana dump.

Dark Ritual also can often just be used to help with a fast 1st turn tasigur. The cycle lands like Barren Moor might also be overall stronger than the temples for the enter tapped land slots you can afford given the Life from the Loam .

I'm also slowly building up a personal deck for whenever I can play the highest power level of commander, Tasigur in progress is the deck, I did make the choice of not doing a season's past tutor engine, but some of my card choices can be pretty good especially on a budget.