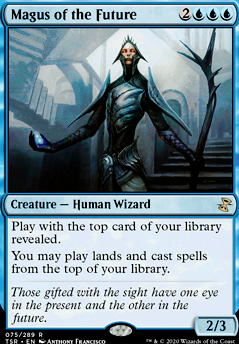 Magus of the Future

You may play lands and cast spells from the top of your library.

Simic Rashmi Commander Cast Me If You Can
by ford0076

Magus of the Future Discussion

Second note, I know they arent always easy to acquire but lands that dont come in tapped are the best lands. Have you considered anything like Monastery Mentor , Kykar, Wind's Fury , or The Locust God ? Kykar can fuel ramp.

Idk if you've considered playing with back ups but if you focus the deck into top deck manipulation for your win con there may be need for back up cards. Future Sight , Magus of the Future , etc

I would suggest Curse of the Swine as better removal than pongify.

And either Future Sight or Magus of the Future if you don't mind telegraphing your moved but having access to your whole library.

Very cool! I see that you have gone in a totally different direction.

Why Magus of the Future instead of Future Sight ? Future sight nets you a spirit with Kykar and is much harder to remove as an Enchantment. It's also super cheap - at lest in Europe. Is this just to hit it (and Trinket Mage) with Divergent Transformations ?

Also Paradox Engine ate a recently. Not a problem if you play house rules, but worth noting if you plan to head to your LGS and play. I personally disagree with the ban logic, and was disappointed to have to remove the Engine from my Kykar deck.

Divergent Transformations makes this deck better. but you need to knock all the other creatures out of the deck except Trinket Mage and Magus of the Future. that way you can grab the top and win.