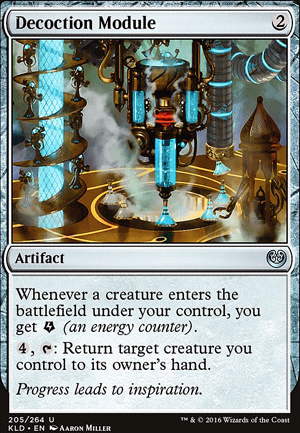 Whenever a creature enters the battlefield under your control, you get (an energy counter).

Love the idea of getting loads of energy from your ETB's and Yarok but I'm not seeing enough good places to actually spend that energy. Now I know they are commons but you might want to consider adding in Aether Herder , Aether Poisoner and Aether Swooper . While they may not be power houses on their own they creation of servors does mean you could very quickly get an army of servo artifacts going which would also daisy chain in with some of the other cards you have, like Decoction Module and Gonti's Aether Heart . Oh man and then it would also trigger with Fabrication Module so all those 1/1 can get pumped up as well. I hope that helps to give you an alternative tactic.

Decoction Module Fabrication Module and Peema Aether-Seer is not an official infinite combo, but it will let you keep making energy like crazy

I don't know if this is a good suggestion but maybe Savage Swipe . You definitely have enough 2 power creatures. Although I wouldn't recommend just playing a Prey Upon so I don't know. I do think however that Temur Sabertooth would be good for sure. It's not a bear but it could let you easily bounce your cheap (2 mana) bears back to your hand to get extra ETB effects. Decoction Module , Roaring Primadox , Stampeding Serow , Stampeding Wildebeests and Ambush Krotiq all have a similar effect but I don't think they are all worth playing. I also think that maybe Conjurer's Closet or Mimic Vat could be good additions. I think since bears aren't a supper strong tribe by them self your best bet is to maximize the ETB effects. (Which seems to be what you're doing.) I would say you could take out a few of the 2 mana 2/2s just because they don't do too too much and you seem to have a lot of them but I don't know. Like you said there aren't too many bears. Anyways I hope this is helpful. :)

@DrValium My playgroup kind of has an interesting history with boompile, so I tend to avoid it unless I have a Daretti, Scrap Savant as my commander. I do like Lethal Vapors though but I am pretty sure I won't get to cards like that until I finish play testing other cards I have. (Haven't been able to meet up with playgroup recently)

@metalevolence That is mostly due to me having cards lying around that I haven't been able to use in a while. I am moving cards around to play test other things but haven't had a chance to meet up with my playgroup recently to try them out. I honestly will likely take those out and add a little more ramp or something to curve out the deck a bit better. I will definitely figure it out when I have more opportunity to play again.

@mtgmidget You should honestly try out Mirror March . It is more of a pet card that I threw in since I was going to toss a Krark's Thumb in anyway but it ended up being very fun to use. It is really fun using it with etb effects or even with something as simple as a Hellrider . Captive Audience also surprised me with how flavorful it felt with the style of deck. If you want to try out some cards for fun definitely worth throwing the few quarters in for em. I also really liked the Decoction Module suggestion because there were a couple energy cards I was looking into anyway.