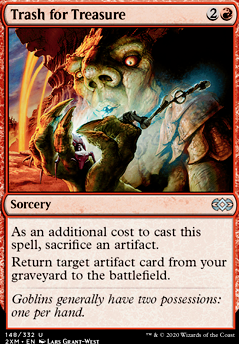 As an additional cost to cast this spell, sacrifice an artifact.

Return target artifact card from your graveyard to the battlefield.

Squee with glee
by BlindCharades 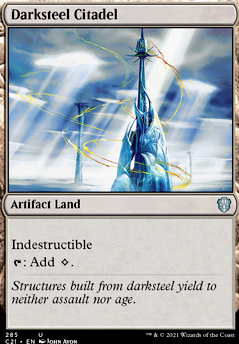 Would Goblin Engineer be of any interest? He helps bring back Krark's Thumb on the off chance it gets yeeted. He can also "tutor" for it provided you have an artifact you're willing to sacrifice to bring it back.

Trash for Treasure is also good for recovering important artifacts.

paytongamer: I'm not sure what it happening with Wizard, but I just looked at the 6 month price history of every card in the deck, and Goblin Welder has seen the biggest increase. Most of the deck has increased in price an uncomfortable amount. Most of the cards aren't even underprinted, a lot of the ones that have drastically increased in price have been printed several times over and in mass production sets. Unfortunately it looks like the mass buyouts of Magic cards is starting to have a more severe impact on all cards. This deck was under $1000 to build just a year ago, and a good amount under $800 if you skipped the fetches. I hope the market corrects itself over time because this it is going to be hard or impossible for a lot of people to build decks that they enjoy that just so happen to have cards that were randomly targeted for buyouts.

CommanderNeyo: I've had Goblin Engineer in the deck in the past, but it ended up not working that well for that version of the deck because I had a hard time guaranteeing that I would have an artifact on the battlefield to swap the GY artifact for. I think to run it again I would want to be in the 20-25+ artifact range, more mana rocks because they play so well with saccing land, Daretti could come back in, bring in things like Trash for Treasure , etc... It's definitely a viable strategy that I will probably end up trying again at some point. One of the reasons this is my favorite deck is it is so flexible when it comes to picking what kind of playstyle you want whether it be token spam, combo, infinites, ETB triggers, combat step manipulation, artifact shenanigans, MLDestruction instead of MLDysfunction, and more, or a mix of all of them!

ObserverWill: Thanks Will! That really means a lot. If you end up trying it out let us know your thoughts or ideas!

For artifact recursion, Trash for Treasure is a useful one for cheating out big artifacts from the graveyard, and is a flavor win as you can literally trade your treasure tokens in for trash... err... your other artifacts XD Also, Goblin Welder is another classic one that can do the same thing. Trading Post is another flexible option, as I can see your deck being able to use most of the options. Though, I'll admit, I usually use these cards to cheat into play big artifact creatures that I've dumped into the graveyard, so you might want to consider this as a side option.

In terms of red artifact tutors, it's a little dicy, as most of the decent options use either blue or black. Inventors' Fair could work once you get all the needed artifacts on board. Some creature options also exist (if you're just looking to make a weird "illegal" fun deck.) Treasure Mage Trophy Mage Tribute Mage and Trinket Mage can fetch out needed artifacts, as well as having limited synergy with Alesha, Who Smiles at Death . Though looking at your current list, I don't see too many bomb cards that would be useful with recuring your artifacts. Maybe look into adding something like Solemn Simulacrum or Golos, Tireless Pilgrim ? In red you have things like Gamble , Hoarding Dragon and Goblin Engineer .

Hmmm... Sliver decks, while fun to pilot, either are dealt with early and fizzle out, or they end up overwhelming if you don't keep their creatures in check. If you're leaning more into the 5 color splashability casual deck, Rakdos Charm is a good catch-all card that deals with a lot of strategies. Even a well timed Blasphemous Act can slow them down. In your current build, I see you do run some interaction, but I think you'll find there are some more consistent better options out there!

Thanks for the suggestions BrassLord. I added Goblin Welder & Trash for Treasure to the maybeboard. I will have to do some playtesting to see if the need for either of them comes up but a good idea in case any key artifact pieces are sent to the graveyard.