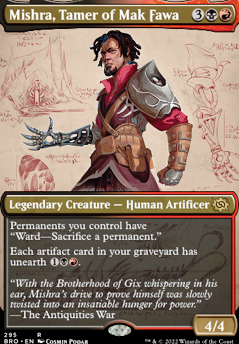 This is a Rakdos Unearth deck centered around dumping powerful artifact creatures into your graveyard and using Mishra, Tamer of Mak Fawa to bring them back to the battlefield. It uses Bone Shards, Cathartic Reunion, Thrill of Possibility, Jaxis, the Troublemaker, and Geier Reach Sanitarium to put as many of your artifact creatures into the graveyard as you can so you can then start digging them back up with Mishra to overwhelm your opponents with multiple large threats that they have to deal with all at once.

The targets you want to hit with Unearth are Cityscape Leveler, Combustible Gearhulk, and Myr Battlesphere. Mind Stone can be a pretty decent target too if you need to get some extra card draw in a pinch.

Bone Shards also doubles as a way to get some extra value out of the unearthed creatures before they exile themselves by sacrificing them instead before Unearth exiles them, and one copy of Braids, Arisen Nightmare was added in for the same reason. Two copies of Void Maw were added so none of the artifact creatures actually get permanently exiled when they leave the battlefield. Since Void Maw allows the unearth exile trigger to be substituted with its own exile trigger, the unearthed cards can be put back into the graveyard using itâs activated ability. Void Maw is actually a pretty essential piece needed to prevent the deck from coming to a screeching halt if Mishra runs out of artifacts to grab from the graveyard. However, I didn't want too many copies of Void Maw because having multiple on the battlefield is redundant so instead of running a full set, I put in two Profane Tutors to grab Maw, or really anything from the deck, when itâs needed.

This deck has gone through a lot of changes since I first put it together. It used to be a Jund deck, but like aholder7 pointed out, the green was pretty unnecessary and was actually hurting the consistency of the deck. So I made a lot of changes that they suggested while keeping the deck a little more casual (since my play group is pretty casual also) and still similar to how I had it before. Thanks to aholder7's suggestions, I'm really enjoying the changes I've made to the deck and I think it puts it in a much better place than it was in before. That being said, if you have any comments or suggestions on how to improve the deck further, I'd love to hear it! Thanks in advance!!