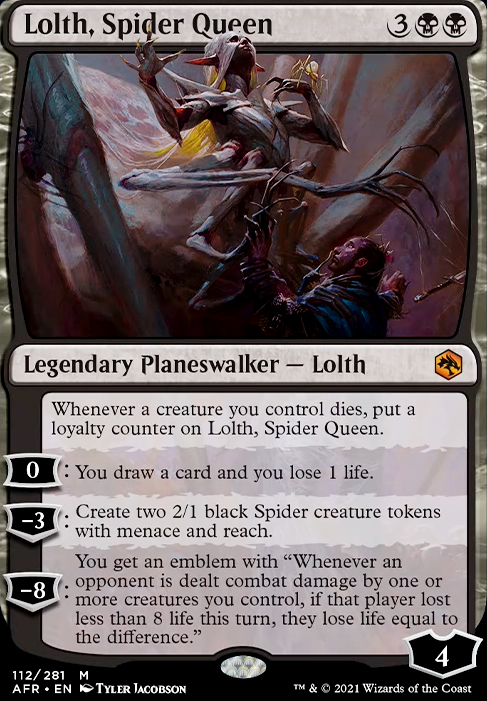 Whenever a creature you control dies (is put into the graveyard from the battlefield), put a loyalty counter on this.

Corpses for Sale
by sshippee

This Deck is Odd
by shivanlord

You mentioned having issues with your mana - is that not having enough lands, or not having the right color lands? With the curve as high as it is, I would recommend adding more ramp in the form of either mana rocks or cards like Land Tax or Archaeomancer's Map. I would also focus on some more high impact and efficient cards to put you in a better position. While Krav and Regna are both powerful cards, you would be in a better position with something like Viscera Seer and Liliana, Dreadhorde General/Lolth, Spider Queen. Skullclamp is one of the most powerful cards you can play in a deck like this. I would also look at removing some cards like Sengir, the Dark Baron in favor of more versatile cards. While Sengir can quickly become big, it doesn't really do much else for your deck in conjunction with your commander.

Dreschjuice I see that like me you have a small budget. I play MTG Arena which is a ton more Free-to-Play friendly with the wildcard system. Definitely play the lifegain lands from Neon Dynasty and the Campuses from Strixhaven. Instead of Agadeem's Awakening Â Flip play Diregraf Rebirth. However since The Meathook Massacre is being used as the win con there isnât a clear budget replacement for Standard. The next cheapest and best thing would be Lolth, Spider Queen. Itâs cheaper but can be hard to use depending on how much Magic youâve played.

Here's Avacyn's replacement! I think this would be balanced? Hopefully?

+1: Until your next turn whenever an Angel or Human you control is dealt damage, draw a card.

-13: You get an emblem with "Creatures you control are indestructible."

Serra, Savior of Innistrad can be your commander

I think this would be balanced, as it would be a really solid finisher for a Humans/Angel tribal deck in standard, but not really good for much else. It would be so conditional in limited, it would be a bomb, but nowhere near as insurmountable as Avabruck Caretaker Â Flip or Lolth, Spider Queen.

As a commander, it would a super cool Human/Angel tribal Commander, although it would be pretty standard white aggro build... Idk, I think it's balanced, but also that it might be too weak.