Whenever you discard a card, if it has madness, untap Anje Falkenrath.

Anje Falkenrath occurrence in decks from the last year 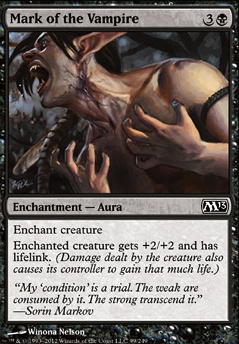 deck for a while, but having that as my win-con turned out to not be fun for me (or my table) in practice. lol

I actually had Spine in this list for a while, but found I wasn't running enough artifact sac engines to take full advantage of its recursion ability. I subbed in Meteor Golem instead so I can duplicate it with Flameshadow Conjuring or at the very least suit it up with equipment if necessary.

Definitely liking the Mirage Mirror and Hoarding Dragon recs though. I'm going to keep those in mind when making the next round of cuts/upgrades.

Culfenor's Urn is a great idea too, but I have a friend who runs a Glissa, the Traitor deck with it, and I don't want to steal his thunder.

Whenever you gain life, put a loyalty counter on ~.

-8: put up to 5 target creature cards from graveyards onto the battlefield under your control.

Challenge: make a card that synergies with Anje Falkenrath

Ah, I see that I have all of your things.

Yeah, I got distracted by Anje Falkenrath

I think it's a cool alternative to Toxic Deluge, which is its closest comparison. Doesn't seem OP. But would be too good for standard, maybe Modern Horizons or Commander specific.

Anje's Peck deals one damage to target creature or planeswalker. It

If you cast Anje's peck from exile, you may exile it instead of putting it into your graveyard as it resolves. If you do, return it to your hand at the beginning of the next end step.

This way you can Madness cast the spell each turn (assuming enough mana) and really get awesome card advantage going, all while pinging down the field.

So far we've done a good job with different planes.

Ikoria, Innistrad, Ravnica, Dominaria... Pick a legend from a new plane as the inspiration.

or some madness mechanics help speed your deck along? Or were you avoiding those for a reason?

Love the inclusion of the transmute mechanic, it is undervalued in my opinion.

should be annie. Liliana Vess could be tutor lili

I'm working on building an EDH with Anje Falkenrath

Ps: I posted originally in MTG Q&A Rules but it looks like my question was removed. Hope this is the right place.