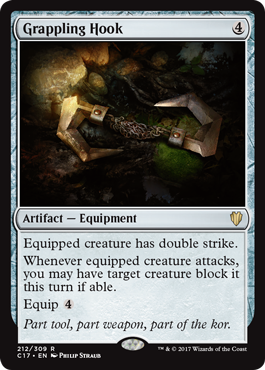 Whenever equipped creature attacks, you may have target creature block it this turn if able.

Konda, Lord of Eiganjo
by Kuzar456

Rasaru, I like Invasion Plans. I ran Grappling Hook in my deck at one time. Ib's sac a goblin to damage a blocking creature hasn't come up all that often for me in the games either. Players who want to block and don't want their creatures blown up generally prioritize getting Ib off the battlefield. I can't say I gave hook a great chance to prove it's worth in the deck but I remember the 8 mana to play and equip was just too much investment when I should have been focused on developing my board state. Heat Stroke seems redundant. I would hope your Ibplosion would have done the job, especially if you have one of the many ways to increase that damage out on the battlefield. Invasion Plans definitely looks like the best option for a strategy where you want to Ibsplode lots of stuff. In the right Meta it sounds like a blast.

At this point I generally won't even run Ib out until I am getting close to being able to go off and win or I have decent protection for him. Sacrificing lands to make gobos is the ability I use to reliably win games. In a game last night I tried to alpha strike with a huge swarm of gobos to clear the board before I went for the win. One of my opponents played a fancy fog that ruined the attack so just sacked the team to Goblin Bombardment. It was a very silly game and I had Gratuitous Violence & Fiery Emancipation on the battle field so each Bombardment trigger hit for 6. Game over.

I can't remember if this was already discussed, but what are you thoughts on Invasion Plans, Heat Stroke and Grappling Hook? In my experience with this deck (played it about 20 times now). I've only every used Ib's first ability (sac and deal 4 dmg) only once (just yesterday)! As a result, I started digging trying to find ways to utilize this ability more. I decided to remove Magus of the Moon and Blood Moon, so I've got a couple free slots open :)

Should consider putting a way to give your commander repeatable double strike so it triggers twice each combat. Here's some decent options without having to change your deck into a spell recursion engine:

Revisiting deck ideas that I liked in the past because I'm looking to build something soon, was just thinking Fireshrieker, Grappling Hook, and Inquisitor's Flail would probably all hold their own as staples in this type of build. Sure unblockable Vorosh is scary, but if he's only hitting 6 the first time and 12 the second time, you're still looking at a 3-turn KO by commander damage for 1 target, then 1 turn/player subsequently. On the contrary, an unblockable Vorosh with double strike is max 2-turn KO for the first target, possibly 1 turn/player if you have a way to give him 4 +1/+1 counters before attacking the first time. At the very least, it would be an available option and give your opponents less time to react to your plan. Plus, double strike on any creature can be scary, so win-win.

I just build my own Ardenn and Rugrat. Two cards I included are Quietus Spike and Scytheclaw. These in combination with Fireshrieker and Grappling Hook can deal massive damage in no time.