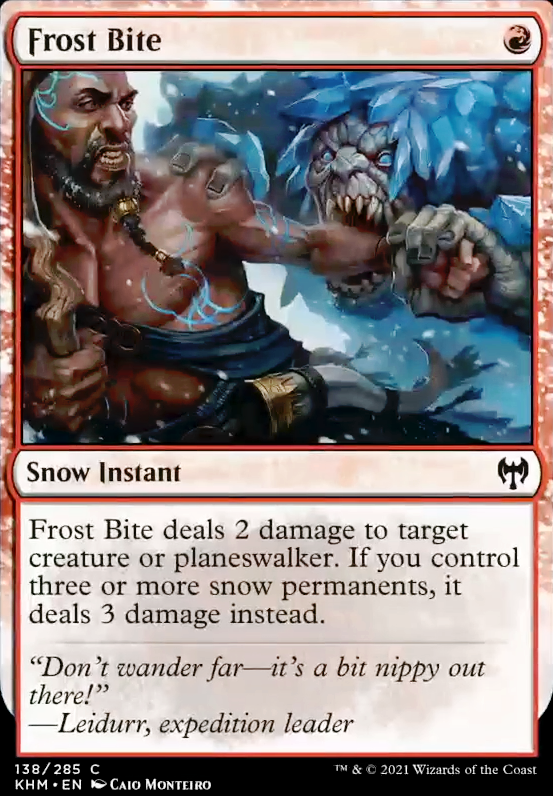 Frost Bite deals 2 damage to target creature or planeswalker. If you control three or more snow permanents, it deals 3 damage instead. 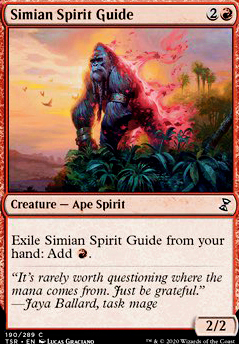 Torbran Burn for Sale
by jordanalessi 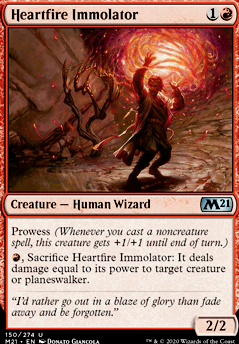 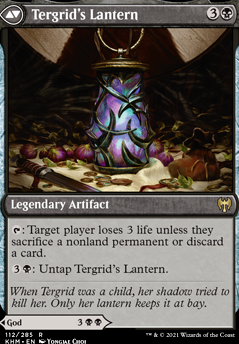 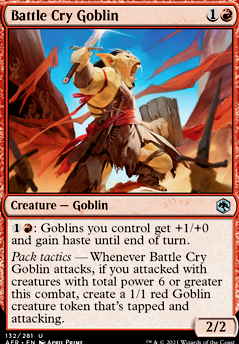 Silence in the Library
by Gingervitis 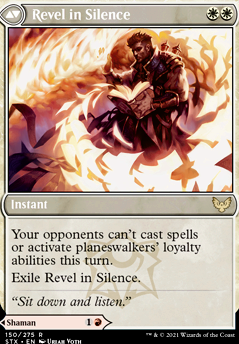 As someone who really really wants to build skred,

No. We got Frost Bite which is like copies 5-8 of Skred. Which isn't what we needed. Oh, and Faceless Haven is okay.

The only unique thing about Skred is snow. Otherwise, you might as well play Ponza. And Snow as a mechanic is pretty underwhelming, and rightfully so.

Snow is a mechanic that cannot get all that much support. It has very little actual cost, meaning that if snow was really worth it everybody would be playing it. Just look at Arcum's Astrolabe , a singular snow card that made snow worth playing by removing the singular downside to snow. It got banned everywhere. It was far too good.

Unfortunately, Skred isn't getting any more support anytime soon, possibly ever. It is a good fun red goodstuff deck that will be good enough to compete basically forever(unless they stop printing red goodstuff).

If you equip your Abominable Treefolk with a Paradise Mantle it will still produce snow mana. Add a Leyline of Abundance and the additional is not snow mana, because it's created by the enchantment, not the snow creature.

You can check for yourself in Arena by enchanting a Snow-Covered Forest with a Wolfwillow Haven and manually tapping it, to see the mana appear separated in your pool, and with overlayed.

So snow is indeed a deeper Magic embedded in the supertype, that can be referred to in rules text ( Frost Bite ) and has inherent effect on the mana produced by snow permanents, which costs of cards and/or abilities may specifically ask for ( Arcum's Astrolabe & Ascendant Spirit ).

I don't know the exact reason Wizards decided to not go the same route with Desert, but I do know that a desert is not just hot and sandy and the opposite of snow. The south pole is considered a desert, due to its low amount of yearly precipitation. I'm glad that, if we ever see it on a card, it will be a 'Snow Land - Desert' instead of a 'Basic Snow Desert Land - Swamp'; whatever that would look like. Ecologically speaking, swamps and deserts are very different and hard to unite, though I'm not sure that would stop Wizards from trying '^^

Kaldheim probably wouldn't have been snow-themed if the snow supertype didn't exist already, but the fan backlash over a Nordic themed set without the already existing snow cards is something Wizards probably didn't want to deal with. Let's just be happy Snow Basics are very cheap again :)

Dragonlord's Servant reduces the cost of your dragon spells by {1}.

Dream Devourer reduces the cost of your dragons by {2} by foretelling them with Dream Devourer , meaning, you could potentially play Dragonlord Kolaghan on turn 4.

Haven of the Spirit Dragon acts as a mana confluence with the ability to recur a dragon from the graveyard to your hand.

Crucible of Fire is the ultimate +3/+3 anthem effect.

Crucible of the Spirit Dragon : builds up mana to cast your dragons.

Draconic Roar costs the same as a Lightning Strike and if you reveal a dragon you get to Lightning Bolt your opponent's face for free - talk about value!

Crux of Fate a one sided board wipe.

Glorybringer : repeated Flame Slash on a flying and haste dragon.

Frost Bite or Wild Slash are good 1 drop removal spells, with Frost Bite acting as a Lightning Bolt is you have a snow covered mountain in play.

Bloodchief's Thirst is better than Bedevil because for it is more useful in the early game and is worth the cost of having to pay the extra mana to remove a MV 3 or greater creature or planeswalker later in the game.

Thoughtseize and Duress is good in the sideboard vs control decks because you will want to remove their sweepers like Supreme Verdict .

Sign in Blood should be removed for early game removal or to keep in some Thoughtseize s in as Sign in Blood is less valuable in surviving the early game.

Note: the main downside to Frost Bite is that you cannot hit face with it.

Frost Bite is an alternative to Lightning Strike because if you have a snow covered mountain it becomes a Lightning Bolt and, if not, it's another Wild Slash .

epicPlain on Turn Sequence and Blocking

If I block with a creature and my opponent destroys it (e.g. with direct damage from Frost Bite ) after that I assigned it to block but before the combat damage phase, is that attacker considered to have been blocked or does that attacking creature deal damages to me?

You could play on MTGA and not worry as much about prices. It's online so you can still play, and once you build up a collection you only need to spend a few wildcards now and then.

As for card suggestions, a fourth Magda seems necessary. Even if she's legendary, she's one of your best cards and will likely be removed quickly. Rimrock Knight is also good here as an aggressive dwarf.

Slaying Fire and Volcanic Geyser are pretty bad for burn nowadays. Frost Bite is a good one, and if you're really looking for that four damage, Thundering Rebuke gets you there. Shatterskull Smashing Â Flip for a mana sink burn.

I can't imagine Bonecrusher Giant being bad here. He's not a dwarf, but he is one of the best all-around spells in red. I like the manabase, but you could use a few more lands if you're looking to get to Purphoros and other big creatures. Maybe a few more Castle Embereths as well. And while you're on equipment and aggro red, Embercleave !

Obviously if you're staying in paper, some of these aren't exactly budget.

After throwing it in the playtester - I've come to not love Frost Bite . With already playing enough removal it just feels redundant and its terrible against any kind of control, and I also don't play enough snow lands to regularly turn it on without Attune.