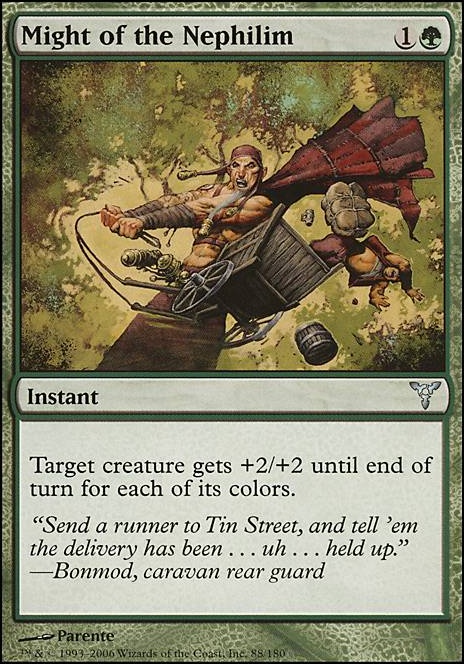 Target creature gets +2/+2 until end of turn for each of its colors.

Hi Bantetsu,With the same multicolor flavour (which I really find nice, btw), why not try something like Might of the Nephilim as a finisher? Predatory Focus is good, but in Modern, you're unlikely to have so many creatures staying on board, it's a little expensive (in case you don't get this fifth land...), and instant speed is much better. In the same vein, Modern being about reactivity, maybe you should put low CCM control/defense spells mainboard, at least 4 Path to Exile for example. Brave the Elements could also be a must!But I don't know what could go out in replacement. Although it is a better creature overall, if you want to decrease the deck price and stick to the multicolor flavour, you could remove the Voice of Resurgence. Depending on the kind of control you're playing against, you could put either Kitchen Finks or Loxodon Smiter in the side. But I know the dilemma :-), I have to make the same choice in one of my decks (My Rhino is heavy but it adapts!. Anyway, good luck with the brew!

Hivestone seems a bit better than Conspiracy. Even though you wont get a counter for Ramos, you can Sun Titan the hivestone back if it dies. Also, what i think its funny for 5 color commanders, aside from Progenitus, is Might of the Nephilim, automatic +10/+10, hilarious!

If you're gonna focus on Elvish Piper to cheat big creatures into play you should streamline your deck a bit. I would cut the 4 Woolly Thoctar and 2 Wild Nacatl for +2 Elvish Piper, +2 Elvish Harbinger and +2 Llanowar Elves. Knotvine Mystic is too color restrictive to your current mana base, so i would cut it for +3 Fyndhorn Elves or +3 Birds of Paradise.

I would also cut 1 Plains and 1 Mountain, since most of the cards we want to cast are green and we have A LOT of ramp, 20 lands is just fine.

Try cutting Growth Spasm and Lightning Helix for +3 Beast Within, Might of the Nephilim is a very subpar card, cutting it (and the 2 lands) for +3 big creatures or Natural Order would give the deck a good boost.

Protean Hulk and Craterhoof Behemoth are good additions, if you can find space on the deck and the budget allows it.

For the sideboard you can add Summoning Trap, Obstinate Baloth and Nature's Claim.

Been playtesting this and Witch-Maw Nephilim + Might of the Nephilim is absolutely disgusting :D

The7thBobba, it's hard for me to say since I don't have much experience working in 5 colors. My initial instinct was that 4 Knight of New Alara, 4 Boros Charm, 4 Might of the Nephilim, and 4 equipment seems like a lot to buff creatures that are already quite overstatted. Civic Saber and Might of the Nephilim in particular seem to be extremely aggressive cards that contrast heavily with the slower pieces of the deck like Chromanticore and Fusion Elemental. If that aggression is part of the primary gameplan, though, then I'd probably just drop most of the cards at 4 CMC or higher.

It's not necessarily a suggestion for the deck, but there is another way to go about the 5 turn win combo. If you use Scion of the Ur-Dragon's effect to turn him into Atarka, World Render after Might of the Nephilim, it will be a 16/14, and with Atarka's ability giving double strike, you will do a total of 32 damage should the attack land, making the attacked opponent lose. You also don't have to spend three mana on pumping Scion up. Also, because Atarka has trample, it gives you an 12 toughness range between killing the opponent or not, where with the standard Hellkite Overlord combo, Scion can't be blocked for the win.