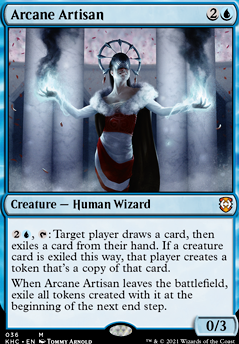 , : Target player draws a card, then exiles a card from their hand. If a creature card is exiled this way, that player creates a token that's a copy of that card. 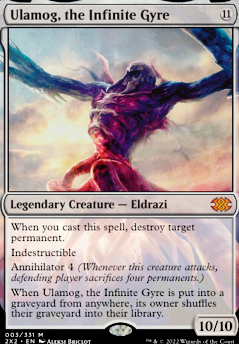 This is fun and I might shamelessly nick some ideas for my own kwain grouphug build, because he's fun and I have a gorgeous foil of him :P

One of the ideas I'm playing with is giving away more advantage if your table can handle it without closing the game faster. Stuff like Arcane Artisan seems like a really fun way to expand on the draw theme and influence the game. Get your fatty out, I double dare you :) And at the same time it increases your value of staying in the game. Artisan dead... yep.

I Foretell You What

take Arcane Artisan add in Containment Priest so you can exile your opponents creatures when you blink/flicker theirs.

this is my set up https://tappedout.net/mtg-decks/ranars-foreshadowing-tells/

Hellkite Courser will be included eventually. Just need to get my hands on one.

Sneak Attack was in my list early on but I cut it when I cut a bunch of higher cost creatures. I might put it back in eventually, but mostly because there are a few tricks it can do.

The rest seem underwhelming to me. Though, I like Arcane Artisan, just not for the deck as it currently is.