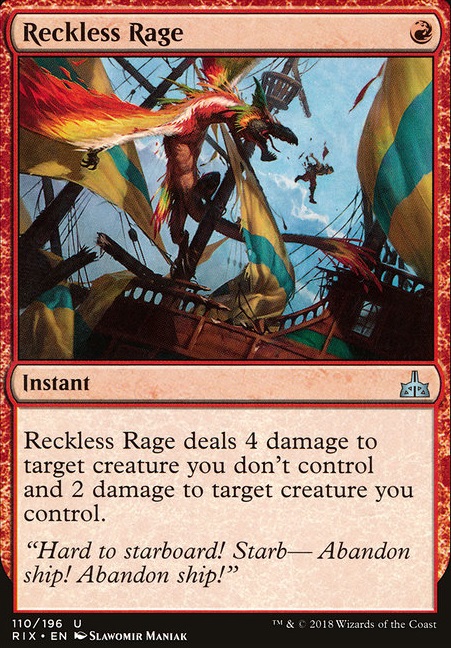 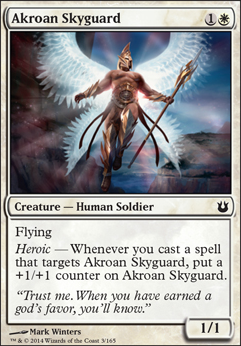 This list is sweet! Have you thought about Reckless Rage? It's super efficient removal, and gives you free Enrage triggers.

Hi, this is -Arcanity-. I'm sorry I may have offended you (I realize my comment on your deck was arguably over-critical), so here I'm reaching out with a different account since you blocked my other one. (If you don't want to talk, you can just block this account too, and I will not bother you any further.)

Okay, so be reasonable. First, you said "Would you mind looking at my deck and giving your opinion", so I commented on what I think are its focus, problems, and improvements. If you took any offense or felt I was being over-critical, I apologize.

Now, let me explain: my deck definitely IS NOT VIABLE if you're playing actual competitive tournaments. This deck is fine for FNM level play, but it is not competitively viable in current Pioneer (I built it when big red, a good matchup, was the top deck in the format), mostly because Lotus Breach and Inverter are running around (I even addressed this point in an update). For this very reason, I didn't add the competitive label to it. Now, the issues with this deck are exactly as you said, in fact, but perhaps not as extreme. It might just be that I have more playing experience with my own deck. The deck often feels a turn or two too slow to keep up, and it does have a LOT of bad hands. I mulligan about once every three games. As with Reckless Rage, I honestly don't have many problems with the card. Knocking your own creature down to one toughness is fine, and there are usually things to kill (in creature matchups, obv). Also, "you do nothing until turn 3 in most games" is TRUE. And that's part of where this deck's fun comes from: the way this plays out, you generally explode in tempo between turns 4-5 to catch up and overwhelm the opponent with a wave of tokens and pump. That's how I won most of my games. It's not the greatest recipe for winning, but I think it IS fun.

Fun is subjective though, so it's obviously fine if you think this isn't the right deck for you. I do however have to disagree on "it wanted to do too many things at once". This deck has an extremely focused gameplan: You have permanents that benefit from pump spells, and, well, pump spells themselves. And that's where it's core weakness lies: draw the wrong half of the deck or get disrupted, and you have a miserable game. That's less "trying hard to be competitive" than trying hard to be fun, perhaps too much for its own success. Again, this is NOT a competitive deck; I only win like 40% of my matches at fnm with it right now (it was a solid 60-65% initially, when the meta was inverter-less). But for me personally, I enjoy janky decks that function but only sometimes win over competitive tier-one decks.

I hope that clarified most things.

I tried out your deck this last week at my LGS, and there are two glaring problems with it. First, this deck is trying to hard to be competitive in a meta where it just isnât viable, like at all... the only games I won were when my opponent kept a bad starting hand and either got flooded or mana screwed. all of the other games Reckless Rage was completely useless, by the time your opponent has a creature on board thatâs worth hitting with Reckless Rage the creatures you have on board either die immediately to it or get knocked to 1 toughness. When I did get a good starting hand, it felt slow, you do nothing until turn 3 in most games; By then almost any other deck in the meta has a half ways decent board state! With that being said, by the time you actually get enough creatures on the board to at least match your opponents youâre already losing and you have nothing to push through with to deal damage! I got Mirrorwing Dragon out once during the entire tournament and then they boardwiped. Season of Growth was an awesome card when it stayed on the board and it definitely kept my hand full, but I ended up cutting it down to 3 of and dropping Mirrorwing in favor of 2 Collision / Colossus after the tournament and played some matches and felt no difference in my chance to draw season of growth and play it, and was able to push through with trample to beat a deck that ran me over during the tournament. My second problem with the deck was that I had zero fun playing it, it felt like it wanted to do too many things at once and ended up only doing 1 or 2 of those things in each game. Itâs trying hard to be competitive and failing miserably.

Oh my god, such a good deck!! I have a feather deck, and I now see how much my deck must change. My only comment is that I recommend Reckless Rage, because it's small, low-cost removal each turn.